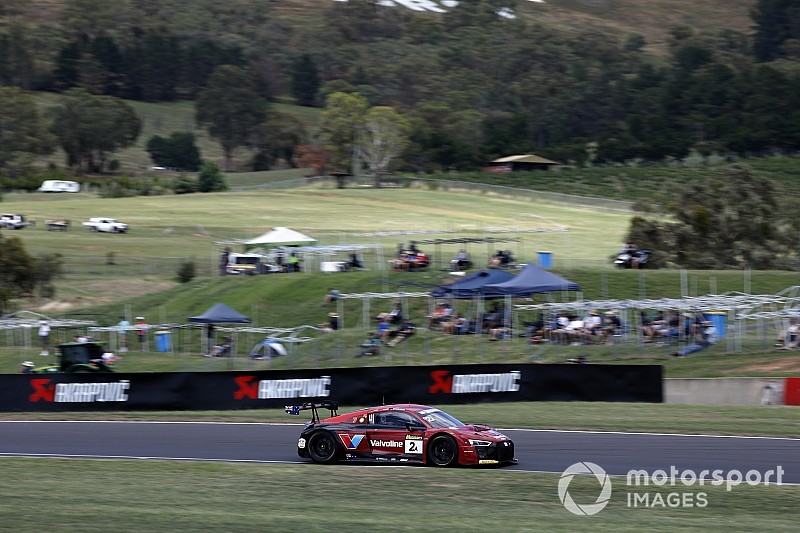 Christopher Mies put the #2 Valvoline Audi on top of the second open practice session ahead of the 2019 Bathurst 12 Hour.

It was the sister #22 Audi, driven by Bathurst 1000 winner Garth Tander, that led the early running if the hour-long session with a 2m06.199s.

That only lasted until the 11-minute mark, when opening practice pacesetters GruppeM took over top spot thanks to Max Goetz's 2m05.253s.

Times quickly tumbled into the 2m04s after that, Nick Foster leading the way with a 2m04.842s in the #27 HubAuto Ferrari, while Shane van Gisbergen slotted in right behind him with a 2m04.904s in the #888 Triple Eight Mercedes.

On 35 minutes the session was red flagged, the #20 MARC Cars entry coming to a halt at the top of The Mountain to spark a 10-minute stoppage.

There were signs of late improvement at the top of the order in the closing minutes, with Jamie Whincup going purple in the first sector on his final run. He couldn't quite do enough to knock off the top two, however, settling for third in the #888 entry with a 2m04.763s.

Christopher Haase then had a crack at his co-driver's time, but fell eight-hundredths short.

Behind the top three, the #999 GruppeM car continued its promising day with fourth, while the #27 Ferrari dropped back to fifth.

Jake Dennis made a late gain to go sixth quickest in the #62 R-Motorsport Aston Martin, followed by the #108 M-Sport Bentley, the #18 KCMG Nissan, and the #98 Aussie Driver Search Audi.

The #4 Grove Racing Porsche was quickest in Class B, the #48 M Motorsport KTM the best of the GT4s in Class C, while the #91 MARC Car of Paul Morris, Keith Kassulke, Paul Tracy, and Anton de Pasquale led the way in the Invitational class.