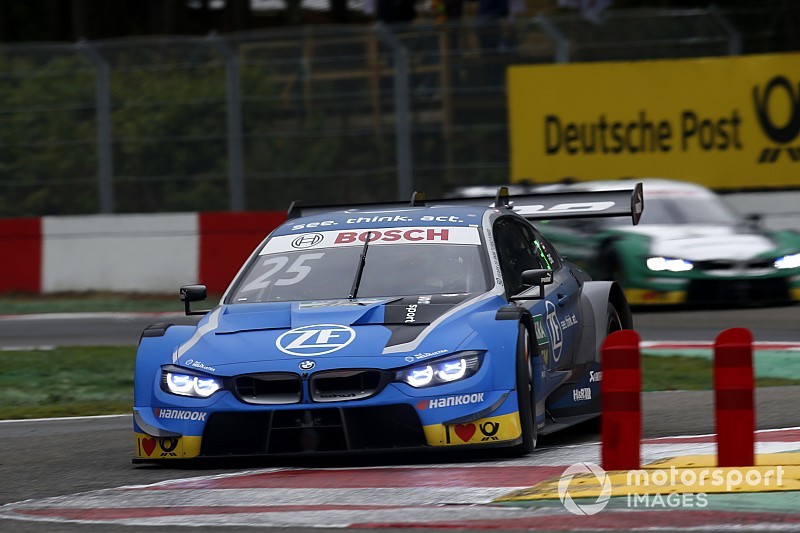 BMW's Philipp Eng won his first DTM race in a dramatic Zolder opener that was thrown upside down by the arrival of a mid-race safety car.

The two R-Motorsport-run Aston Martins of Jake Dennis and Daniel Juncadella stopped almost simultaneously halfway into the race, with the former pulling off at the entry of the pitlane and forcing a safety car while Juncadella moved off the track and stopped. That meant the leading trio of Bruno Spengler, Marco Wittmann and Rene Rast were caught out, having not yet taken their mandatory pitstop.

Spengler had looked a candidate for the win after a stunning start from third on the grid allowed him to lead into Turn 1, before pitting from the lead a lap after the safety car period ended. Rast's race also unravelled when he pulled into the pits 11 laps from the end with a technical problem, after reporting a lack of top speed.

By then Eng had already moved into the lead when the order shuffled out, having started seventh on the grid. The BMW driver had climbed to fifth before stopping on lap 11 of 39 and was further boosted by Robin Frijns earning a five second stop/go penalty for a jump start.

Once Eng moved to the front, he was able to canter into a lead of over three seconds to seal his maiden DTM victory. Behind him, Joel Eriksson and Nico Muller battled for second with the Audi driver repeatedly putting pressure on the BMW ahead to no avail.

Eriksson sealed the position when Muller ran wide on the final lap as the BMW driver crossed the line just ahead of Muller. Loic Duval finished fourth, despite a nervy moment when the WRT Audi of Jonathan Aberdein barged past with door-to-door contact that pushed the Frenchman wide and Aberdein into retirement with front-right bodywork damage.

Mike Rockenfeller sealed fifth with just two laps to go when he swept around the inside of Audi stablemate Jamie Green at Turn 1. Pole-sitter Wittmann, who had looked set for a podium finish at least until the safety car's arrival, had to settle for seventh.

Aston’s Paul di Resta finished an impressive eighth from a starting position of 16th after opting to make his mandatory pitstop on the first lap and taking a 'free' second stop during the safety car. The fellow Aston Martin of Ferdinand Habsburg was ninth ahead of Spengler.

Sheldon van der Linde, Frijns, Timo Glock and Pietro Fittipaldi filled out 11th through 14th and the last of the classified drivers.