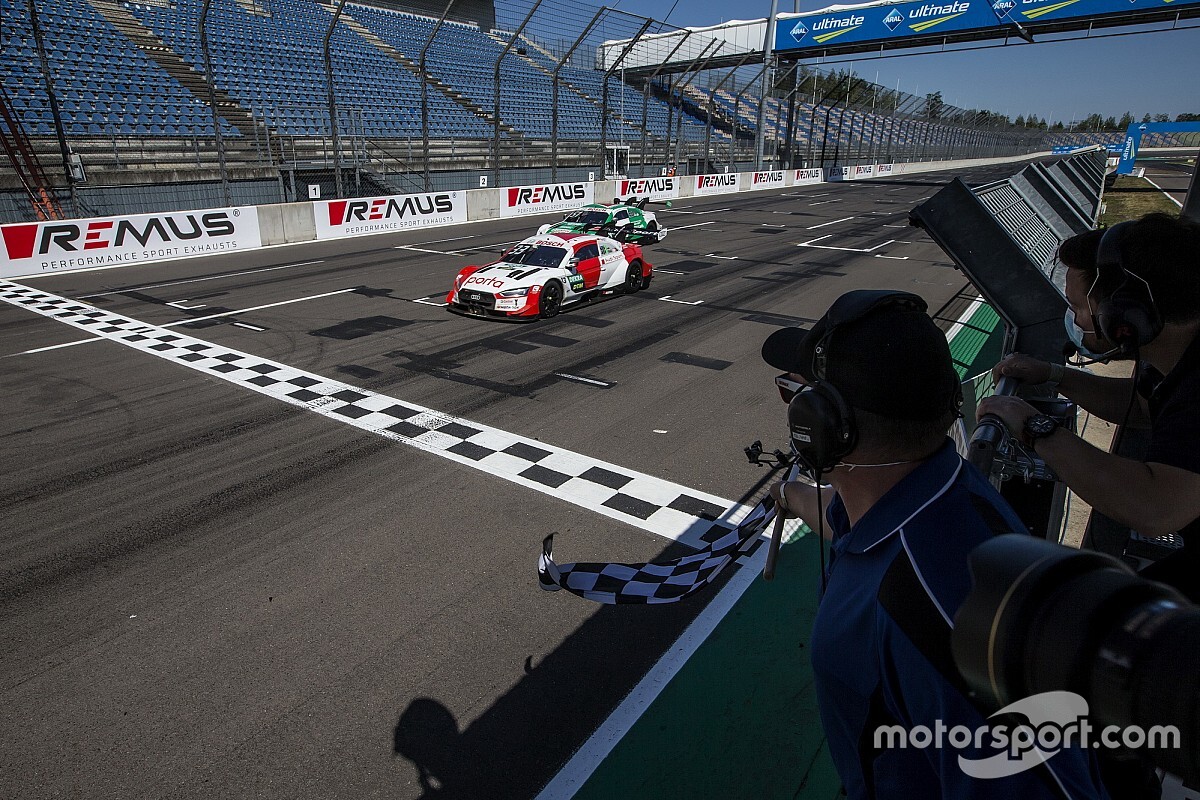 Audi stars Rene Rast and Nico Muller have retold the story of their battle after recording the closest finish in the modern era of the DTM at the Lausitzring on Sunday.

Reigning champion Rast was on course to take a comfortable victory in the second race of the weekend, having successfully outduelled polesitter Robin Frijns after a long battle between the Audi stablemates.

But, equipped with fresh tyres, Muller started rapidly closing in on Rast in the final stages of the race, bringing the deficit down to under a second by the penultimate lap.

After failing to make a move at Turn 1, Muller took advantage of a double boost of push-to-pass and DRS while exiting the final banked corner, pulling alongside the reigning champion as they drove towards the finish line.

Muller eventually fell just 0.089s short of overhauling Rast and clinching what could have been a fourth win in as many races at the start of the 2020 DTM season.

The 0.089s difference between the two Audi drivers marked the closest finish in the DTM since the championship was revived in 2000, and it was on par with the margin by which three-time Le Mans 24 Hours winner Klaus Ludwig beat fellow Opel driver Uwe Alzen in the ITC race at Norisring in 1996.

After suffering his first defeat of 2020, Muller said he left it too late to attempt a pass on Rast, but felt he couldn’t risk a collision while battling with another driver from the Audi stable.

“I only had one lap of DRS left for the last three laps of the race," said Muller. "So I was not really 100 percent sure if I already shoot [it] when you exit the last corner on the second last lap.

“But I thought it would be smart to try and keep a second chance open and I didn’t go all-in for Turn 1.

“Rene pushed me a bit onto the dirt on the exit when I was trying to get my nose in, which was fully normal. I was just not quite alongside enough on the exit, picked up shit on the tyres.

“I mean here this weekend, especially offline there’s a lot of dust and if you go there, it takes you three-four corners to fully recover. I paid the price for that.

“I knew that in the end my only real chance would be to outdrag him towards the line with my last DRS and push to pass and it didn’t quite work out. I had lost just too much ground when I went through the dirt, that was it.

"Maybe it would have been the better choice to try and divebomb into Turn 1, but when you’re teammates and driving for the same brand, it’s maybe not the same risks you take.

“I opted for trying to make a smart move without risking ending our both races. And in the end he was a little bit ahead, the small detail made the difference again.”

The Lausitzring round marked the second time Rast fended off Muller for victory during the dying laps of a DTM race in 2020, having similarly defeated him in a straight fight in the second race at Spa earlier this month.

However, Rast was later stripped off that victory 12 days later after it was found that he illegally used push-to-pass twice while in the lead of the race.

Asked to explain the battle from his perspective, Rast said: “I knew Nico would be coming because he stopped later and I always checked where he was on track.

“And in the last two laps he came closer and closer. I expected the race to be one lap shorter so I was a bit surprised that we have to go one lap longer than my calculation was.

“Obviously DRS and push-to-pass have a big effect. But I wasn’t sure if Nico has push-to-pass and DRS left. So I had no idea.

“I tried basically to defend as good as I could and try to get a good momentum out of the last corner and hoping that he had no DRS and push to pass left. It was just enough.”