Red Bull protege Liam Lawson lashed out at "idiot" Kelvin van der Linde after losing the DTM title at the Norisring, describing him as the "dirtiest guy" he's ever raced against.

Lawson was the favourite for the 2021 drivers' title heading into the final race of the season at the Norisring on Sunday, and strengthened his chances of lifting the trophy by taking pole position in his AF Corse Ferrari.

But the 19-year-old was hit by an opportunistic van der Linde at Turn 2 on the opening lap, suffering severe suspension damage to his car in the process.

This was the second race in a row where the two championship protagonists came to blows at the hairpin, after van der Linde attempted a similar move in Saturday's opening encounter - although at that occasion it was the Audi driver that came off worse.

With Lawson tumbling to the rear of the pack in his impaired Ferrari, Maximilian Gotz was able to overturn a 19-point deficit to snatch the title from the Kiwi - taking advantage of Mercedes' controversial call to employ team orders late in the race.

Speaking after his title defeat, Lawson didn't mince words while describing his first lap clash with van der Linde, saying the Abt Sportsline driver should have learned from his actions after Race 1.

"It's exactly the same as Saturday," said Lawson of the incident. "I really thought the guy would learn. After what he did yesterday to do the exact same thing, ugh!

"Obviously, it ruined out race from there, so pretty gutted. I'm just disappointed for the whole team, they really deserved this [title], they worked so hard this year.

"Every weekend I've given the absolute maximum, I really wanted to repay them with the title. We were right there with pole position, the car was really good and I had another good start. But sometimes you just can't prevent the same idiots from doing the same thing."

He added: "I am of course very disappointed. I am immensely sorry for my whole team. They deserved that. When you get pushed off by the same guy over and over again.... That's honestly the dirtiest guy I've ever raced against. He never seems to learn.

"To not make through Turn 1 cleanly on both days, to get taken out by the same drivers both days is very very frustrating and I would have thought the guy would learn but maybe he never learns." 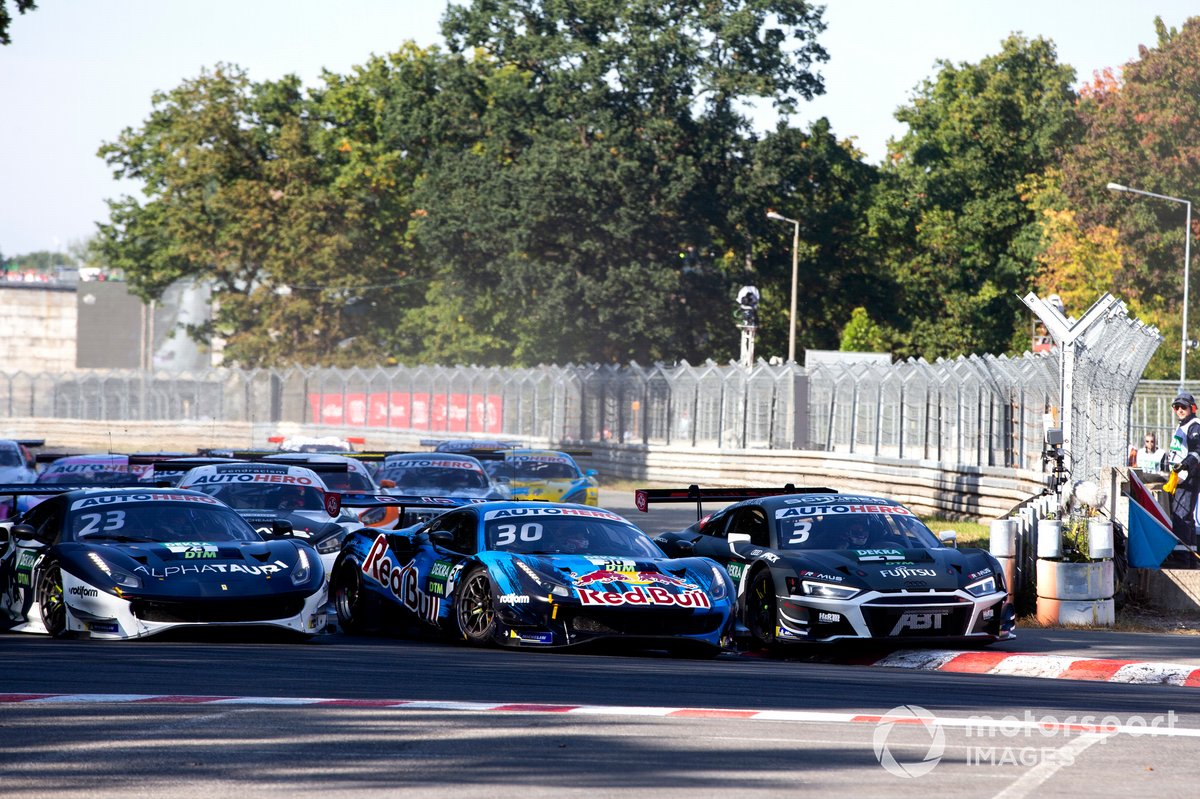 Van der Linde himself finished outside of the points after picking up a puncture in a battle with Gotz for third place, ending his maiden season third in the standings.

The South African defended his start incident with Lawson in Sunday's race, saying he had a hard time slowing down the car to make it through the corner.

"I'll say braking in turn 1 is always difficult," van der Linde told German broadcaster ran.de. "I was surprised there, to be honest. The brake wasn't really there in my opinion. Then I had to take evasive action. I didn't want to drive into his car, that wasn't my job. Then we had contact in Turn 1."

Van der Linde was hit with a five-second time penalty for cutting the corner just prior to his clash with Lawson.