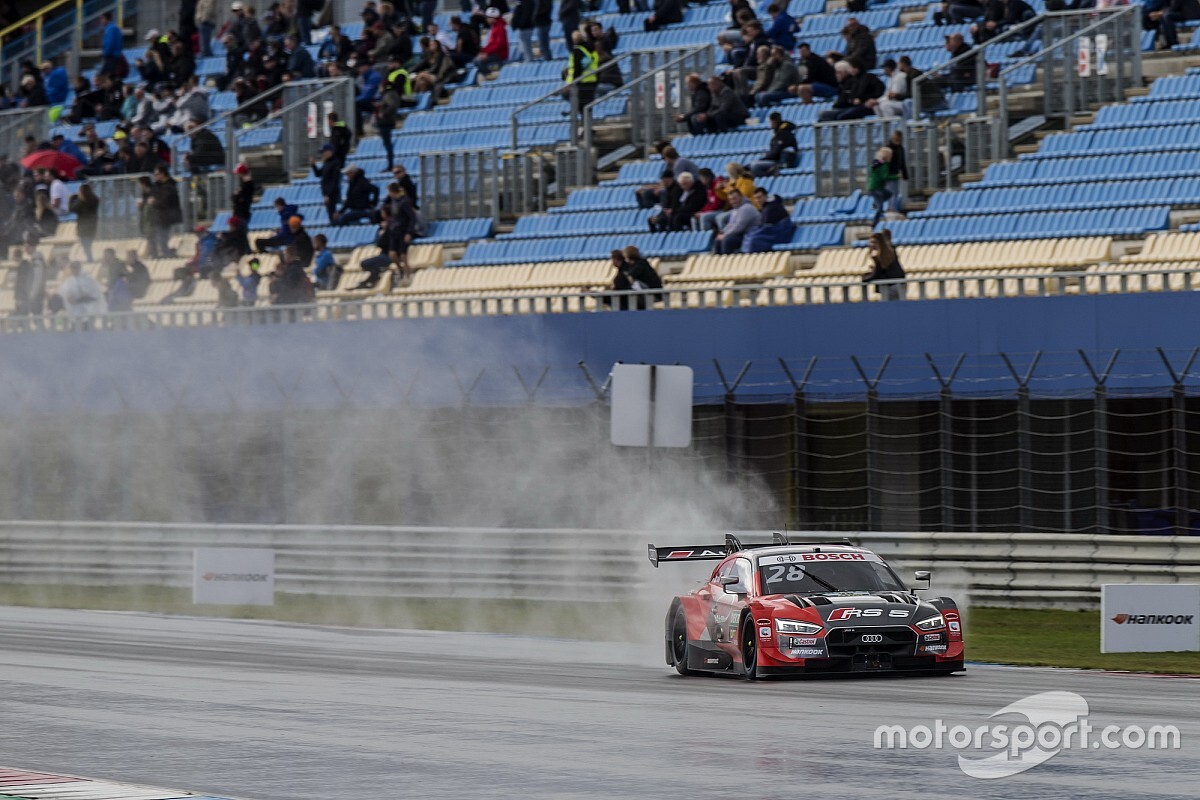 Loic Duval has apologised to the Phoenix Audi DTM team after he lashed out over the squad's choice of tyres during Sunday's wet Assen race.

Duval led the early stages of the second Assen race from home favourite Robin Frijns after passing polesitter Rene Rast at the start, but had slipped to sixth behind teammate Mike Rockenfeller by the time he entered the pits on lap 17 of 31.

Phoenix fitted another set of wet tyres in anticipation of more rain despite Duval having made a request for slicks, and the French driver made his displeasure clear over team radio.

"Look everybody. F*** man. Forget this app and just look at the weather."

Phoenix's decision was vindicated when track conditions worsened in the second part of the race, and even Rockenfeller - who had originally opted for slicks - was forced to stop again to switch back to wet tyres.

Duval, who eventually beat Rast to finish fourth, said slicks would have been the right call if it didn't rain again, but nevertheless apologised to the team for his choice of words.

"We were expecting the track to dry out quickly, like it's been drying up [on Saturday] and early on [Sunday]," Duval said after the race.

"We were struggling with the tyres. I could see that the racing line was drying, was not dried yet, but  we decided to go for [a pit] stop after something like 13 or 14 laps [of green flag running].

"Without the rain it would have dried up and the slicks would have been better than the wet tyres. But I couldn't see the sky and stuff like that.

"I was convinced that it will go dry, to a dry track. That's why I was pissed and I already apologised to the team because I should not react like that.

"At the end, they did make the right call. It was a mistake from my side and that's it. It did rain again, probably would have been the right call [otherwise]. That's why we ended up in this situation."

WRT Audi rookie Fabio Scherer gambled on slick tyres when the track was still wet and suffered a massive incident on lap 23, which played a role in the race being red-flagged as marshals recovered his stricken RS5.

It later emerged that the radio channel from race control to Scherer's car was not functional, which means the FIA F3 graduate was unaware of changing track conditions.

After the crash, Scherer branded the rules as "dangerous" which prevent teams from speaking over the radio unless the driver is in the pitlane or a yellow flag is deployed.

"The problem was I hadn't had the radio," Scherer told Motorsport.com. "It was a misunderstanding with the tyres and we sadly took the slicks and it started to rain again.

"I was asking for a pitstop, nothing in reply. The rules should allow [drivers] to speak to engineer, but they weren't so for sure [it's] dangerous. Then I lost the car in straight line driving so it's really unusual."

"Just for me when you are on slicks and [the condition] turns to wet, for me [the rules] need to be changed because it's anyway dangerous."