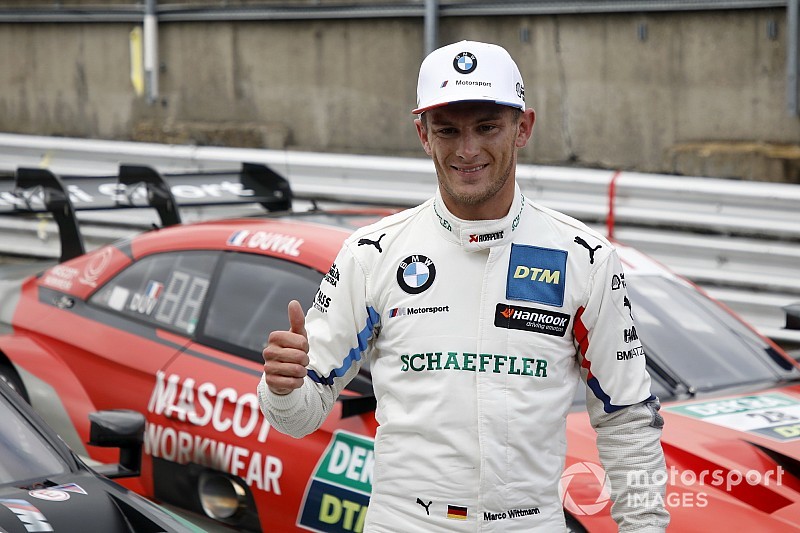 Changeable conditions provided a headache for the DTM field, demonstrated by Bruno Spengler completing a single lap on the wet tyre compound before switching.

But moments after the wet-shod Philipp Eng put his BMW on provisional pole position, Fittipaldi lost control of his WRT-run Audi RS5 DTM at Paddock Hill Bend and slid off backwards into the tyre barrier, ripping off the rear of his car and losing the left-side door.

A lengthy red flag was called, just as Fittipaldi's teammate Jonathan Aberdein also had an off.

The session resumed and Jake Dennis stunned the field by placing the R-Motorsport Aston Martin Vantage DTM on provisional pole position after deciding to go on the slick tyres.

With 10 minutes remaining, the field attempted to better Dennis's 1m16.342s lap that had placed him almost two seconds clear of the field.

It took until the final minutes for Rast to storm clear and the Audi driver looked set to hold onto pole with a 1m15.723s effort. But Wittmann crossed the line in the final seconds of the session and deposed Rast by lapping 0.069s faster.

Another Audi driver, Loic Duval sealed third in the final minutes of the session and Paul di Resta placed his Aston in fourth after two quick laps late on.

Robin Frijns (Audi), who topped the earlier practice session, was fifth ahead of Sheldon Van Der Linde (BMW) and Dennis settled for seventh after his earlier efforts.

Title contender Nico Müller (Audi) was eighth ahead of Timo Glock (BMW), who suffered a high-speed off at Paddock Hill Bend in the first minutes of the session.

Daniel Juncadella was 10th to make it three R-Motorsport Astons in the top 10, with the fourth car of Ferdinand Habsburg taking 16th after his earlier practice off at Druids.

Jamie Green was 13th behind BMW's Philipp Eng and Audi's Mike Rockenfeller after holding provisional pole position at one stage in the session.

UPDATE: Following qualifying, the DTM revealed that the three best-placed BMWs in the race "will not be counted for the manufacturers' classification". This is due to BMW making a request to the technical delegate for the seals to be opened on three additional engines.

It means BMW has fallen foul of Article 28.5, which reads: "Irrespective of the aforementioned provisions, each competitor has the right to submit a written application for a late engine sealing of engines to the Technical Delegate.

"If any such application is approved, the highest classified driver of the corresponding make at the next Race following the engine replacement will not be considered for the make classification in that Race.

"In the case of additionally approved applications, in addition, the accordingly next classified driver/s of the corresponding make etc. will not be awarded any points in the make classification of the next Race."