X-raid is going to race again with Peterhansel

Some two months after the 2013 Dakar Rally ended in Santiago de Chile with the second consecutive win of the Monster Energy X-raid Team, ASO announced the first facts for the 2014 Dakar. While the entire Dakar baggage will race in the well-known host countries Argentina and Chile, the motorbikes will make a side-trip to Bolivia. The Dakar represents the season highlight for the Monster Energy X-raid Team that is going to once again race the legendary event with French pairing Stephane Peterhansel / Jean-Paul Cottret, next year. 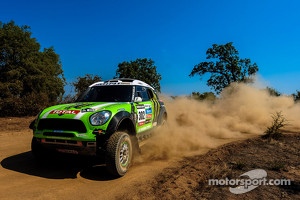 Stephane Peterhansel joined the Monster Energy X-raid Team in 2009 and won the Dakar Rally for the Trebur based team in 2012 and 2013. Altogether, the exceptionally skilled driver celebrated a total of 11 wins, in the famous off-road endurance rally – six of them on a motorbike. The 47-year old impresses in particular with his calmness and his outstanding ability when it comes to assessing himself.

The Dakar will be started on 05th January in Rosario, Argentina – not far from Buenos Aires. From there, the event will take the competitors along the Andes to Salta, the venue of the Rest Day on 11th January. Afterwards, the competitors will have to keep on driving northward. But only the motorbikes will make a side-trip to Bolivia while the rest of the field will head directly to Chile and the world-famous Atacama Desert. And on 18th January, the field of the 35th Dakar edition will cross the finish line in Valparaiso, west to Santiago.

“We are delighted with also racing the 2014 Dakar Rally together with Stéphane,” said Monster Energy X-raid Team Manager Sven Quandt. „The ASO hinted that we will have a marathon stage without service for the cars, in the evening. With his experience, Stéphane certainly will be up to this challenge, too.”

You are going to race the 2014 Dakar Rally for the Monster Energy X-raid Team again. What are the strengths of the team and the MINI ALL4 Racing? 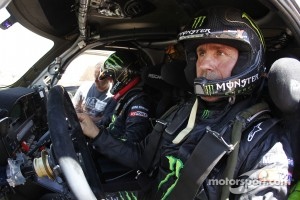 The reliability of the MINI ALL4 Racing is virtually unique. In two Dakar Rallies, we didn’t encounter a single technical problem. But not only thanks to the very good car but also because of the entire team that is doing an extremely professional job throughout the Dakar. Despite heat, sand and the massive pressure, everybody works flawlessly. Only this approach enabled us to prevail against competitors who enjoyed regulation advantages.

How do you assess the route of the 2014 Dakar?
With our cars, we probably will race only in Argentina and Chile. It’s a pity that only the motorbikes will make the trip to Bolivia and that Peru doesn’t represent a part of the 2014 Dakar. We had some interesting tracks and great dunes, there, in the past two years. But we should trust in the ASO organisers. The routes in the past three years were really good.

ASO announced that the special stages will be longer and that the cars, too, will have a marathon stages. What do you think about that?
That would be great. With the MINI ALL4 Racing, we’ve got a highly competitive car. We raced the past two Dakar Rallies without encountering any technical problems whatsoever. And I also would be delighted about marathon stages from a personal point of view. They represent a huge challenge – and a challenge we had to cope with in Africa.