Two in a row for Sam Tordoff 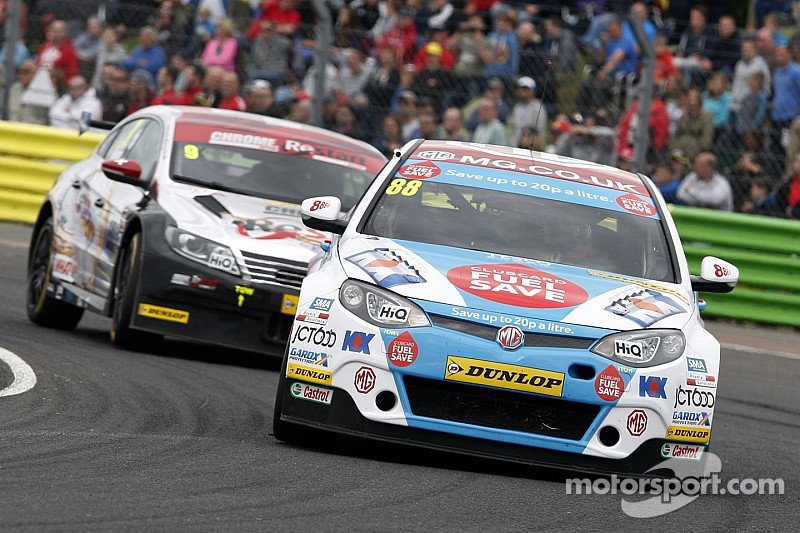 Young gun Tordoff set the pace early on, proving the MG6 to be the weapon of choice by clocking a lap time of 1:22.471s that would remain unchallenged for the remainder of the session. Jason Plato also completed his best lap in the early running and although he attempted a late charge he was unable to extract any further performance from the car. “We’re not far off, but I’m more concerned about the racing ” reflected the double champion.

I couldn’t be happier right now – we’ve got the pace to be at the front and the team has done a great job to give me a car capable of pole.

With the British marque topping all three sessions throughout the day, Tordoff was delighted to have scooped the third pole position of his BTCC career and his second in a row following his recent effort at Knockhill. “I’m really thrilled – the car is working well at the moment and I feel really good behind the wheel, so together we’re a winning combination!” beamed the 25-year-old.

“We’ve struggled and had a bit of bad luck over the past couple of weekends, but what hasn’t changed is the pace of the car – once again we’re on the front row. We’ve had good form here as a team – we locked out the front row last season so we know the car is good.

“It was a case of fine-tuning it in that session – the track was quickest at the start, it was a good job I got the time in when I did because I couldn’t match it on the next set of tyres. I couldn’t be happier right now – we’ve got the pace to be at the front and the team has done a great job to give me a car capable of pole.”

A likely MG one-two was scuppered by Turkington, who again hauled his eBay Motors BMW on to the front row of the grid despite carrying 45kg of success ballast. The 2009 champion produced one stellar lap that was good enough to importantly split the MGs.

“I didn’t know what to expect coming into today,” he said. “Rockingham is a bit like Thruxton because it’s so abrasive and it makes setting the car up tricky. That said we’ve been there or thereabouts all day – we found a little bit more for qualifying but it’s not easy stringing the perfect lap together around here, you really have to force the car a little bit.

“It certainly doesn’t come as easy as a circuit like Knockhill, but I’m really pleased to be on the front row. I had a big lockup on the front right coming into the hairpin on my quickest lap so it wasn’t perfect, but it didn’t cost me too much. The way the championship is at the moment it’s really important to start at the front – I’ll be racing against my direct competition and I need to get as many points in the bag tomorrow as I can. We found it tough at Knockhill starting further back in race one, so this time I’ve given myself the best possible chance.”

It was Civic Tourer versus Civic hatchback in the battle for fourth with Honda Yuasa Racing’s Gordon Shedden seeing off reigning champion Andrew Jordan by the tight margin of 0.073s. Despite having to settle for a third row start Jordan’s performance throughout the day has marked a solid return to form for the Pirtek Racing driver after a particularly difficult mid-season.

Adam Morgan’s consistent campaign continued as the WIX Racing Mercedes A Class maintained its attack on the top six. The Lancashire driver will line-up alongside Jordan in tomorrow’s opener ahead of the Quantel Bifold MG of Marc Hynes, who scored his best qualifying result of the season.

Former champion Alain Menu was the first of the VW quartet on the timesheets in eighth, whilst his three Chrome Edition Restart Racing team-mates struggled to find the ultimate pace. Honda's Matt Neal took ninth while Mat Jackson won the Airwaves Racing scrap as he pipped Italian Fabrizio Giovanardi to tenth by just 0.023s.

2013 Rockingham race-winner Rob Austin out-braked himself at turn two early on and could only manage 13th whilst his RAR stable-mate Hunter Abbott also endured a spin. Chris Stockton went off in his Chevrolet Cruze, as did the VW of Warren Scott, whilst United Autosports Glynn Geddie stopped early on with electrical problems.

Robb 'Hollywood' Holland ready to 'shake and bake' at The Rock