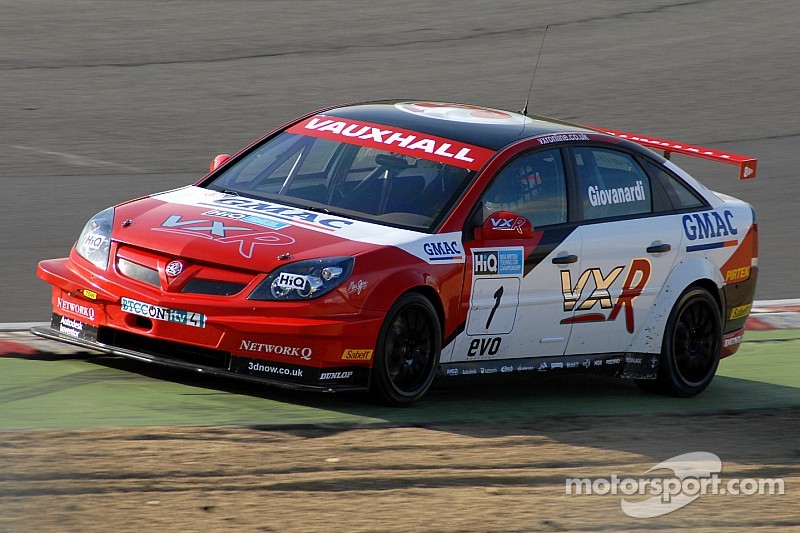 After Triple Eight notched up its 500th BTCC start, Jamie Klein looks back at the squad’s rich tradition of success in the series with insight from team co-founder Ian Harrison.

It's testament to Triple Eight's sheer level of achievement that the team continues to be regarded as one of the championship's true powerhouses despite having not taken a BTCC drivers' title since 2008.

Now in its fourth season as the works MG squad, Triple Eight's brightest years came during its 13-season partnership with Vauxhall, which as to rank one of the most durable alliances between team and manufacturer seen anywhere in motorsport.

Along with ex-Formula 1 driver Derek Warwick and Roland Dane – now the boss of Triple Eight's successful Australian arm – former Williams F1 team manager Ian Harrison assembled the squad to take over the works Vauxhall BTCC programme vacated by RML at the end of 1996.

Super Touring cost ridiculous money, and the racing wasn't even as good as it is now.

But success was far from instant, with the Super Touring-era Vectra proving uncompetitive in 1997 despite two-time champion John Cleland joining Warwick on driving duties.

"Because of homologation, we inherited an aero kit that wasn't very effective, so we struggled like hell at first before we got our first wins the following year," explained Harrison.

Indeed, the Super Touring era as a whole is not one Harrison looks back upon with fondness: "It cost ridiculous money – the biggest teams were easily spending $10m a year. It just wasn't sustainable, and the racing wasn't even as good as it is now."

Introduced in 2001 to replace the Super Touring category in the face of a mass manufacturer exodus, the BTC-T regulations paved the way for Triple Eight's domination of the championship.

For four consecutive seasons, Vauxhall locked out the top two positions in the drivers' standings and secured both the teams' and manufacturers' crowns – thanks largely to the characteristics of the new-for-2001 Astra Coupe.

"The Coupe was very good aerodynamically, and [technical director] Ludovic Lacroix constantly drove the engineering and design of the car forwards," said Harrison.

"The BTC-T cars weren't as spectacular to watch as the Super Tourers, but at least you could have a decent race with them. And we were doing it on about a fifth of the budget."

Jason Plato took the team's first title in 2001 amid an acrimonious battle with teammate Yvan Muller, who subsequently duked it out with Plato's replacement James Thompson for honours over the course of the next three seasons.

With the Astra Coupe reaching the end of its commercial life in 2004 however, Triple Eight's fortunes took a nosedive in 2005 with the advent of the Astra Sport Hatch.

"We were stuck with a car with bad aero just as Honda had introduced the Integra, which was even better than the Astra Coupe aero-wise," lamented Harrison.

"Muller left at the end of 2005, but the Sport Hatch had been designed around him. Fabrizio Giovanardi didn't like the car when he joined in 2006, and he didn't know the circuits.

BTCC's embrace of the Super 2000 rules that had proven such a hit in the World Touring Car Championship allowed Triple Eight to return to winning ways, as Giovanardi took the Vectra back-to-back titles in 2007 and 2008.

After the Italian narrowly lost out on a third consecutive crown in 2009, the realities of the recession bit hard. Triple Eight was left in a precarious state when Vauxhall pulled out of the championship as its parent company General Motors went bankrupt.

"We were just hanging on by our fingernails, so winning the independents' title with James Nash in 2011 has to be one of our most satisfying achievements."

Having enjoyed so much success with Vauxhall, Harrison wasn't content with his team's new status as underdogs and was on the lookout for a new manufacturer with which to align Triple Eight.

The return of MG to the series provided an opportunity to do just that, but despite the MG6 having been a perennial contender in the hands of Plato during the last three seasons, the alliance has yet to scale the same heights as the Vauxhall partnership.

"The difference between then and now is that there's much less chance for teams to engineer themselves an advantage because of how the rules are," explains Harrison, who insists that such a state of affairs is for the good of the BTCC.

"It's all about putting on a show now, and the fact we get 40,000 spectators turning up at race tracks, which is many we had in the Super Touring days suggests we must be doing something right.

"The fans have access, and there's close racing for a fraction of the cost of the old days. Everyone has a chance, which means the championship is in the best state it's ever been."