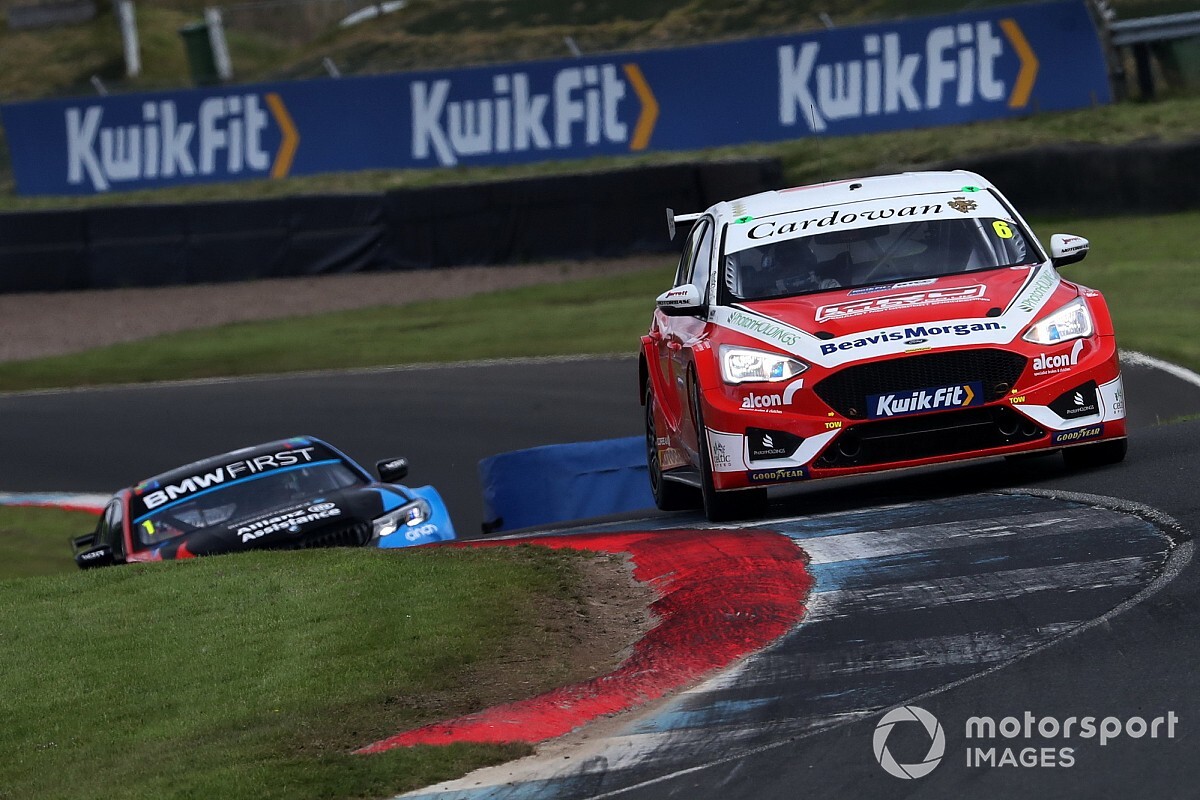 Rory Butcher scored a predictable win from the front row in the reversed-grid finale to the British Touring Car Championship round at Knockhill.

On his home circuit, Butcher dominated the race in his Motorbase Performance Ford Focus ST, and survived a post-race investigation into an alleged false start.

Butcher was 10th in race two following an incident with Jake Hill, so was carrying just 6kg of success ballast on the rapid Focus. He got the better of poleman Senna Proctor’s Excelr8 Motorsport Hyundai i30 at the start, but had to do it all over again as a massive midfield crash on the second lap caused a red flag.

At the restart, there were suspicions that Butcher crept forward before stopping, and then he once more launched ahead of Proctor on the run to the first turn. Butcher gradually extended an advantage in the shortened 20-lap contest, while Proctor did a very solid job to equal the new-for-2020 Hyundai’s best result of second, albeit 6.442 seconds adrift of the flying Ford.

“I’ve had quite a difficult day,” said Butcher. “In race one I made up one place to finish fifth, which was good, but in race two I wasn’t really proud of my performance there because I overdrove. I had to sit down and reset, and I was confident I could lead it into Turn 1.”

Of the alleged false start, Butcher said: “I’m not exactly sure why.”

Tom Chilton scored his first podium of 2020 with third position in his BTC Racing Honda Civic Type R. Chilton got down the inside of the second Excelr8 Hyundai of Chris Smiley at the hairpin on the opening lap, and completed the move to take third into Duffus.

Smiley’s Hyundai seemed to struggle on 12kg of ballast compared to the unballasted sister machine of Proctor, and next to pass him was Tom Oliphant.

Oliphant’s move on the fifth lap into Duffus was spectacular, with the West Surrey Racing-run BMW 330i M Sport launched way up onto two wheels as he completed the move. Oliphant then set about Chilton, but dropped two wheels into the gravel exiting the chicane, before recovering and shadowing the Honda again by the finish.

Two more Hondas were fifth and sixth, with Jake Hill in the old-spec MB Motorsport Civic heading home the works Team Dynamics-run car of Dan Cammish. Smiley did a fantastic job to defend seventh from a snaking throng of challengers for the final three-quarters of the race.

Aiden Moffat was first in line in that train in his Laser Tools Racing Infiniti, before championship leader Colin Turkington snuck his BMW past. But Moffat regained the place from Turkington, who finished ninth with rear-bumper damage.

That still allowed Turkington to eke his points advantage out to 10 over Ash Sutton, who was 11th in his LTR Infiniti behind the Speedworks Motorsport Toyota Corolla of Tom Ingram.

The red flag was triggered when the right-rear wheel of Ollie Jackson’s Motorbase Ford seized solid following contact from the Mercedes of Adam Morgan at McIntyre’s.

Jackson then spun out of control at the chicane and was heavily T-boned by the Power Maxed Racing Vauxhall of Mike Bushell, while Sam Osborne’s MB Honda also sustained race-ending damage.