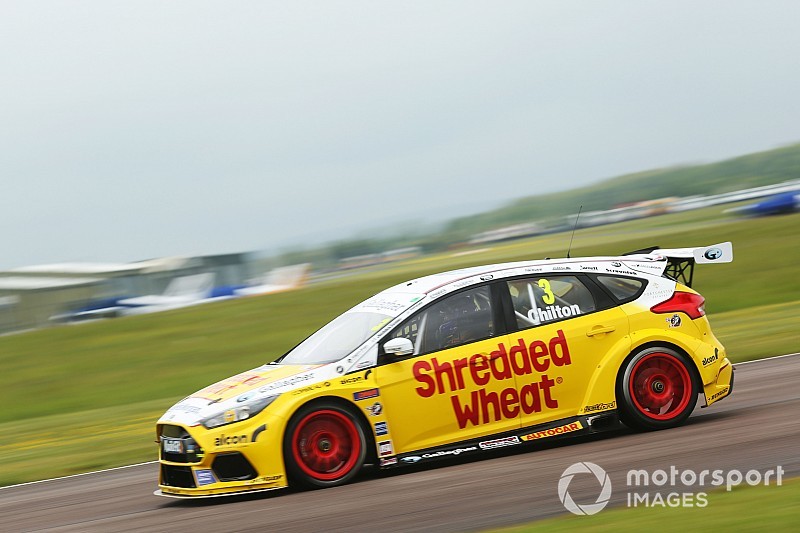 Tom Chilton was victorious in the final BTCC race at Croft as Jason Plato returned to the podium thanks to their conservative decision to run wet tyres.

Motorbase’s Chilton capitalised on his fortune to be drawn on pole for the partially-reversed grid and was never headed on his way to the spoils over Jack Cook.

The Ford driver had previously won on road in race three during the season opener at Brands Hatch but was penalised down to second for contact with early leader Matt Neal.

But there was no uncertainty over his victory this time out, which he claimed on wet tyres despite the track drying in the build up to the race.

A heavy shower hit but as the cars were permitted to complete two sighting laps on their way to the grid seven drivers opted for slick tyres.

Chilton led away from Cook but the first car on dry tyres, Tom Ingram starting third, plummeted down to 19th come the end of the first lap.

That promoted Power Maxed Racing driver Plato up to third, and he closed to Cook and Chilton to round out a front-wheel-drive top three at a venue which as traditionally favoured rear-driven runners.

There was a brief safety car interlude when the slick-shod Volkswagen of Jack Goff made contact with Chris Smiley on the run through the Complex and broke his rear-left suspension, which spun him across the grass.

Chilton was again composed at the restart and never faced a genuine threat on his way to the spoils, and his 14th BTCC win.

Honda driver Cook maintained his record of scoring a podium at every venue so far in 2019, as Plato piled on the pressure to the flag to score his first podium since race one at the circuit last year.

Ashley Sutton dived down the inside of his opposition into the final corner to move up from 10th on the grid to fourth – recovering from a five-place grid drop for his race two collision with Smiley.

Race one and two winner Andrew Jordan had led Turkington, but lost out to both his teammate and the AMD Tuning car of Butcher on the last lap through Sunny when he ran wide while carrying the maximum 54kg of success ballast.

The safety car extended the race to 17 laps, but it still was not enough for Ingram to become a serious threat on slick tyres.

After dropping to the tail-end, it was only on the final lap where he snared the fastest lap.

He did however limit the damage from his tyre gamble and climbed to 16th.

Ex-Formula 1 driver Mark Blundell was 19th ahead of Nic Hamilton, while the next best slick runner was the WSR BMW of Tom Oliphant in 23rd.