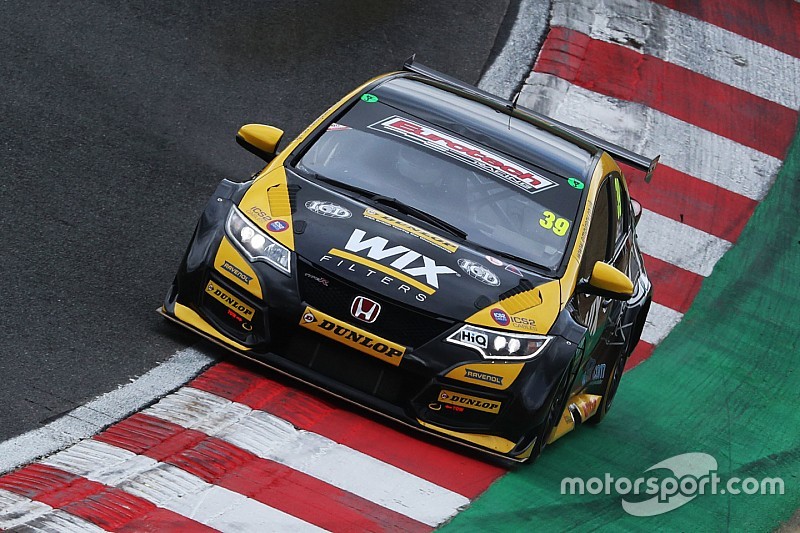 Eurotech Racing driver Brett Smith claimed his first BTCC pole at Brands Hatch as the two main contenders for the crown, Colin Turkington and Tom Ingram were left stranded in the midfield.

Honda driver Smith pipped the factory-backed Team Dynamics Honda of early pacesetter Dan Cammish with six minutes to go, and then held on in the session which was red-flagged in the dying moments when Rory Butcher’s AmD Tuning.com MG slid into the gravel on the grand prix loop.

Smith, who is 24th in the points and therefore had no success ballast aboard his car, said he had been surprised with the result.

Cammish, for his part, felt he had been denied a shot at setting an even faster time by troublesome traffic. The Honda man was on his fastest lap when he happened across a queue of cars heading into Clearways.

He will start ahead of his teammate Matt Neal, who was pleased with the time and with his starting slot.

The top five on the grid will be completed by Jack Goff’s Eurotech Honda and Dan Lloyd’s similar car, run by BTC Norlin. Senna Proctor will start sixth in the Power Maxed Racing Vauxhall.

Championship leader Colin Turkington will line up in 17th spot in his WSR BMW, behind title outsider Tom Chilton (Motorbase Ford, 15th). Second in the points, Tom Ingram, will line up 19th in his Speedworks Toyota.

Turkington leads the standings by 34 points going in to tomorrow’s three races from Ingram, with Chilton 64 points adrift with 67 to play for.

Turkington had 75kg aboard his rear-wheel-drive car and said he was satisfied with the performance to grab 17th if not the position.

“It is important that I am ahead of Ingram,” he said. “It gives me the upper hand early on in the weekend. I believe we have improved the car but you can see just how tought it is with the weight on. We did a good job though and I will sleep well tonight.”

Ingram, who carried 66kg of weight into the session, thought that he had more to come. He said: “We knew qualifying would be the hardest part of the weekend although I am not sure any of us with weight expected to be this far back.

“We have work to do to take some serious points out of Colin in race one, but we know what the BTCC finale weekend can bring. It is still all to play for.”