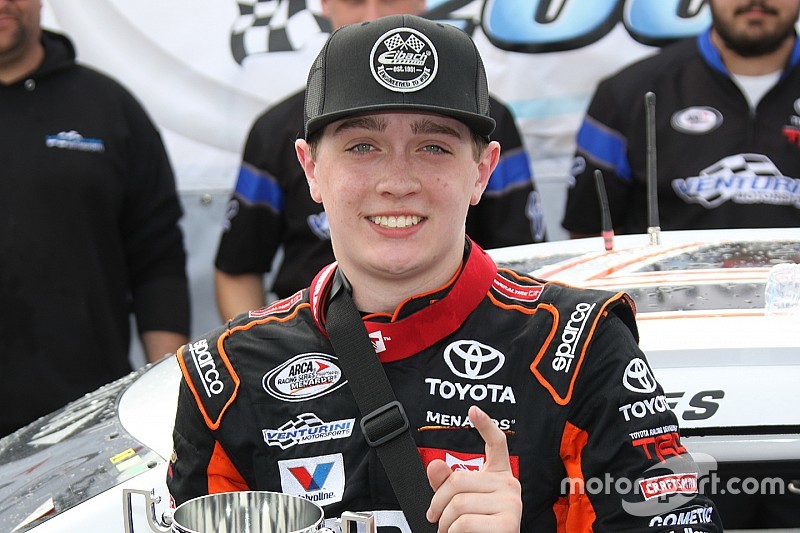 It what is promising to be one of the most challenging battles for the ARCA Racing Series title, Christian Eckes added another chapter at Salem Speedway on Sunday.

The Middletown, N.Y., driver led four times in the third race of the season, including the final 51 laps, to earn his first series win.

Eckes, driving the No. 15 JBL Audio Toyota for Venturini Motorsports, passed Zane Smith on Lap 148 and then held off a hard charge from Chandler Smith to win the Kentuckiana Ford Dealers 200.

"I can't believe this … I really can't," said Eckes, 17. "This is the biggest win of my life. This is Salem. It's so hard to win here. I have no words to describe how relieved I am right now and how much this means to me."

Eckes was also quick to thank his pit crew which got him out first during the final pit stop of the race and taking on four tires.

"This Venturini pit crew won this race,they got us out first,” said Eckes. “As a whole, we executed perfectly. There have been so many, so many seconds. To finally get this victory - it’s the biggest one of my career."

Chandler Smith, who started on the pole, finally cleared Nashville race winner Zane Smith for second place with 30 to go and tracked down Eckes to challenge for the win.

Eckes remained out front despite the constant challenge from Chandler Smith as the duo made their way around lapped cars late in the race.

"It's hard, so hard to look up in the mirror and see that black car charging the way he did," Eckes said. "I have no idea how we held him off for so long. What a day. This is a genuinely tough track to get around. It's just a great day."

Chandler Smith cut a tire on the final lap of the race sending him into the outside wall. That allowed Zane Smith to finish second followed by his MDM Motorsports teammate Sheldon Creed.

"We just managed tires all day," said Zane Smith. "We put on four at the end, and it was time to go. We were riding behind (Eckes) and got a little tight late, center. It was a lot of fun."

Creed grabbed the podium finish and credited his tire strategy in putting him in position at the end to contend with the leaders.

"This place is definitely a challenge," said Berry. "You really have to manage tires, you wear 'em out so fast. Feel like you gotta run this place a couple times before you really get on to it.

“We got a little too tight when we put tires on it. It came down to who was the best in the end. Hope I get the opportunity to come back and try again."

Completing the top 10 were Riley Herbst in sixth, followed by Gus Dean, Colby Howard, Brandon Grosso who came home ninth. Chandler Smith was credited with 10th-place, one lap down to the winner after suffering his accident.

Smith, after making contact with the wall, was taken to a local area hospital where he was examined and released.