Mikel Azcona clinched the 2022 World Touring Car Cup title in the season finale in Saudi Arabia, as the long-running tin-top championship came to a close.

Spaniard Azcona, 26, sealed the championship at the end of the Q2 session when Munnich Motorsport’s Nestor Girolami, the only driver with a hope of beating him to the title, slumped to the 12th fastest time - missing out on the points on offer in qualifying in order to remain mathematically in the title hunt in Sunday's two races.

Comtoyou Audi driver Nathanael Berthon led the first of the two night races all the way from pole position as BRC Hyundai’s Norbert Michelisz chased him.

The Hungarian made a number of attacks before tyre and brake wear forced him to back off and defend from Franco Girolami.

The younger brother of Nestor Girolami had been waved past fellow Comtoyou Audi driver Tom Coronel, who was struggling with understeer, to challenge Michelisz for second. He tried a move up the inside of Turn 1 on the penultimate lap, but the Hyundai blocked and Michelisz kept the place despite being pushed wide through the chicane.

Franco Girolami then handed back third place to Coronel on the run to the flag for the veteran Dutchman’s first podium finish of the season.

“Norbi was not doing any mistakes, he was putting me under pressure until the end,” said Berthon. “The race is very long, it was a lot of pressure and with one mistake he would have overtaken me.”

Behind the top four, new champion Azcona engaged in a tight battle with Gilles Magnus. Azcona’s Hyundai had lost three places on the first lap after a poor launch, to Coronel, Nestor Girolami and Magnus, before the race was briefly neutralised for a safety car after Attila Tassi struggled to find a gear on the grid.

Once racing resumed Azcona passed Magnus when the Belgian ran wide, only for the Audi to pull a great move back at Turns 1 and 2. Azcona retaliated, knocking Magnus sideways further around the lap, only for the RS3 LMS to move back ahead and secure fifth place. 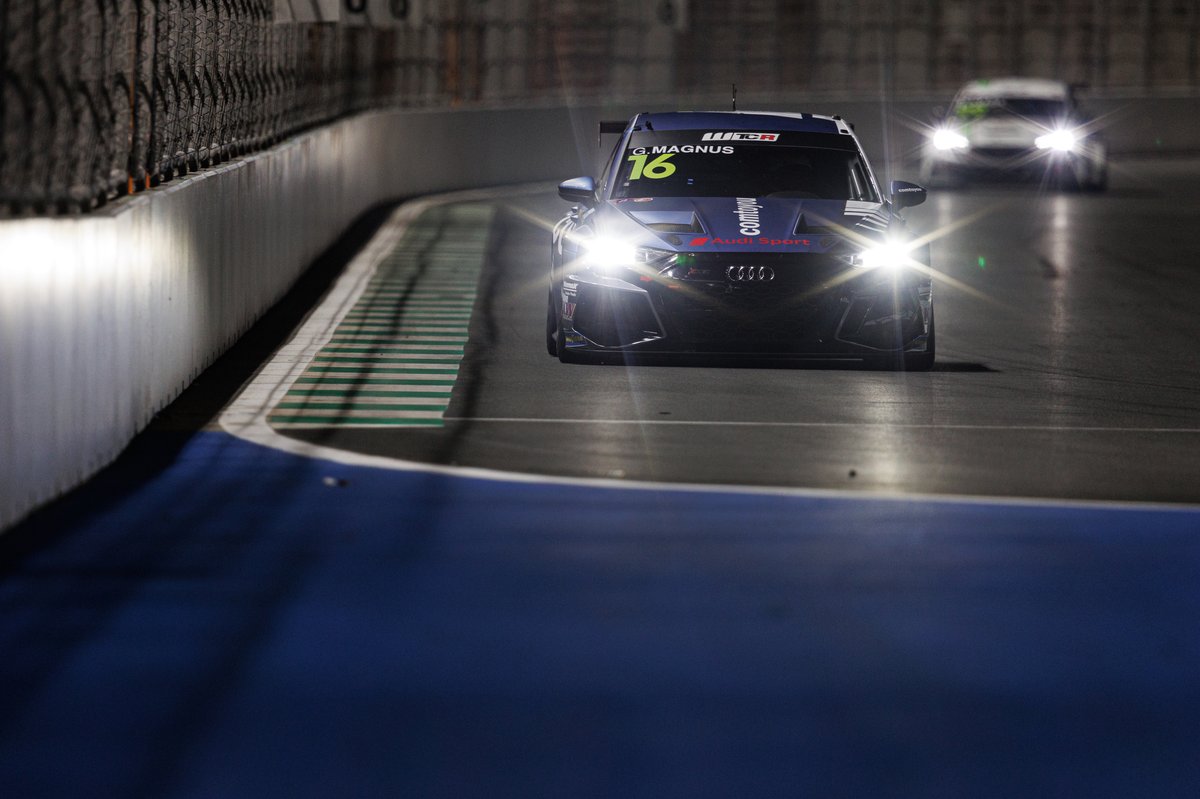 Tassi led the partially reverse-grid second race from pole position and survived a scare at the start of the second lap, when Esteban Guerreri outbraked himself while challenging into Turn 1 and spun. But a lap later Tassi was under attack again.

Franco Girolami, running third in his Audi, made a move on BRC Hyundai’s Nicky Catsburg for second – and wiped out both Tassi and the driver he was trying to pass. All three retired from the race.

The incident allowed Magnus to inherit the lead he would not lose as he claimed his third win of the season, just two weeks after causing his team a major headache by taking out former Comtoyou teammate Mehdi Bennani in a collision in Bahrain.

“Man, did I need this,” said a delighted Magnus. “For the team, for myself, for my confidence. We’ve been through tough times. Bahrain was tough. This was exactly what I needed to end the season.”

Comtoyou’s wildcard entry, Macedonian Viktor Davidovski, had started on the front row with Tassi but made a poor start and dropped to sixth – then gained back all his lost positions through the incidents ahead of him. He held off champion Azcona to score a remarkable podium finish and complete a team 1-2.

Behind Azcona and Michelisz, Berthon duelled with returning Zengo Motorsport driver Rob Huff in an attempt to earn enough points to depose Nestor Girolami from second in the points – but could not find a way past.

Then on lap 18 Berthon made a move up the inside at the final turn and the two cars made heavy contact, which broke the Audi’s right-front-wheel. Girolami, who finished eighth, was confirmed as the series runner-up as the final WTCR race ended in anti-climax under a safety car.