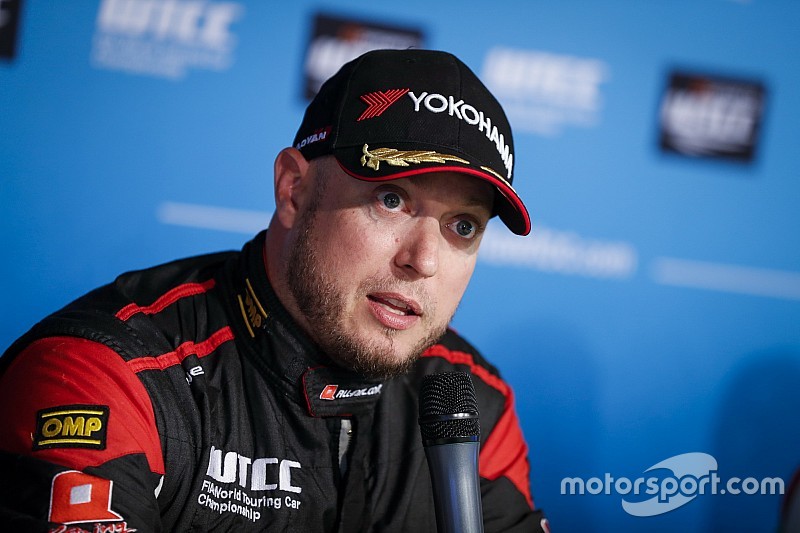 Rob Huff has vented his frustration with the "inconsistency" of WTCC stewards, after Nicky Catsburg escaped sanction for their clash at the start of the main race at the Nurburgring.

Citroen driver Huff looked set to steal the lead from Catsburg’s Volvo into Turn 2 before the Dutchman made contact with Huff’s car, forcing him into a slide and down to fourth.

He recovered one place to finish third, repeating his result from the earlier qualifying race.

“Nicky completely messed up Turn 1,” said Huff. “He was too busy looking at Norbi [Michelisz] on the outside, and he went really deep.

"I tried to give room, and because he’d messed the corner up, I expected him withdraw the front foot of his car from the inside of mine because he’d made a mistake, but he chose not to, and that dropped me to fourth.

“I then had a really good three or four corners with Thed [Bjork, which was totally fair, and that’s how it should be.

"Tom Chilton, Esteban Guerrieri, Tiago Monteiro, Thed… I had such fair racing with those guys today and we gave each other racing room; Nicky gave me no room and just drilled the side of my car.”

Catsburg believed there was nothing he could do to avoid the contact, saying post-race: “In Turn 1 I braked a little bit too late, and Rob went on the inside and turned in for Turn 2, but unfortunately, I couldn’t disappear.

"I was fully on the kerbs on the inside so I couldn’t have done anything else.”

The race stewards, joined this weekend by Supercars Championship race director Tim Schenken, said the contact was a racing incident after Huff questioned it after the race.

“I’m upset with Nicky, but I’m angrier with the stewards, because the inconsistency is unforgivable,” said Huff, who was penalised for making contact with Catsburg in race two in Hungary.

“Tim Schenken is a lifetime race-goer, he runs one of the best championships in the world, if he sees that as racing, OK, that’s fine – but where was he at the last race weekend in Budapest when I just caught the back of Nicky because I was being drilled from behind myself?

“People are paying millions to race here, and we don’t want to have it ruined by inconsistent stewarding.

"I love the fact we’re FIA and a World Championship, but why can’t the FIA and the World Touring Cars afford to bring the same stewards to each race weekend? Let’s bring back a driver steward, which is basically what Tim Schenken is.

“It’s unfortunate that this championship could be decided by the inconsistency of stewarding. I don’t think anyone can disagree with what I’m saying, it’s just that I’ve got the balls to say it and no one else has.”