Kawasaki’s Jonathan Rea says he has “no regrets” about his World Superbike championship streak coming to an end after losing this year’s riders’ title to Yamaha rival Toprak Razgatlioglu.

Rea won both races in a rain-affected weekend at the new Mandalika Street Circuit in Indonesia, but that wasn’t enough to overturn what was a 30-point deficit to Razgatlioglu heading into the final round.

This brought an end to the Ulsterman’s run of consecutive WSBK titles that began with his move to Kawasaki in 2015, with the Japanese brand also missing out on the manufacturers’ title for the first time since the start of its partnership with Rea seven years ago.

However, Rea says he will go into the winter break with his head held high, having outduelled both Razgatlioglu and Ducati’s Scott Redding on WSBK’s first visit to Indonesia.

“It was a super day, I’m super content with that,” six-time champion Rea said after his double win on Sunday. “After FP1 we faced some difficulties. So to rebound, to come back, win in the wet and win in the dry, I’m super happy.

“I tried to put a good pace directly [at the start] but Toprak and Scott were also very fast. I could understand where they were fast and I just rode with nothing to lose and wanted to go out on a high.

“That was the target this weekend, to go home satisfied with my effort and we can really say that we have no regrets this year. I rode my maximum with all my heart every race and I’m very satisfied.

“Congratulations to Toprak and his team. They've done an incredible season, they were very fast and really made me improve as a rider as well. Look at myself, evaluate how I can be better, how my bike can be better.

“So this winter we'll be really pushing Kawasaki to improve our ZX10-RR and try to come back with a stronger package for 2022.” 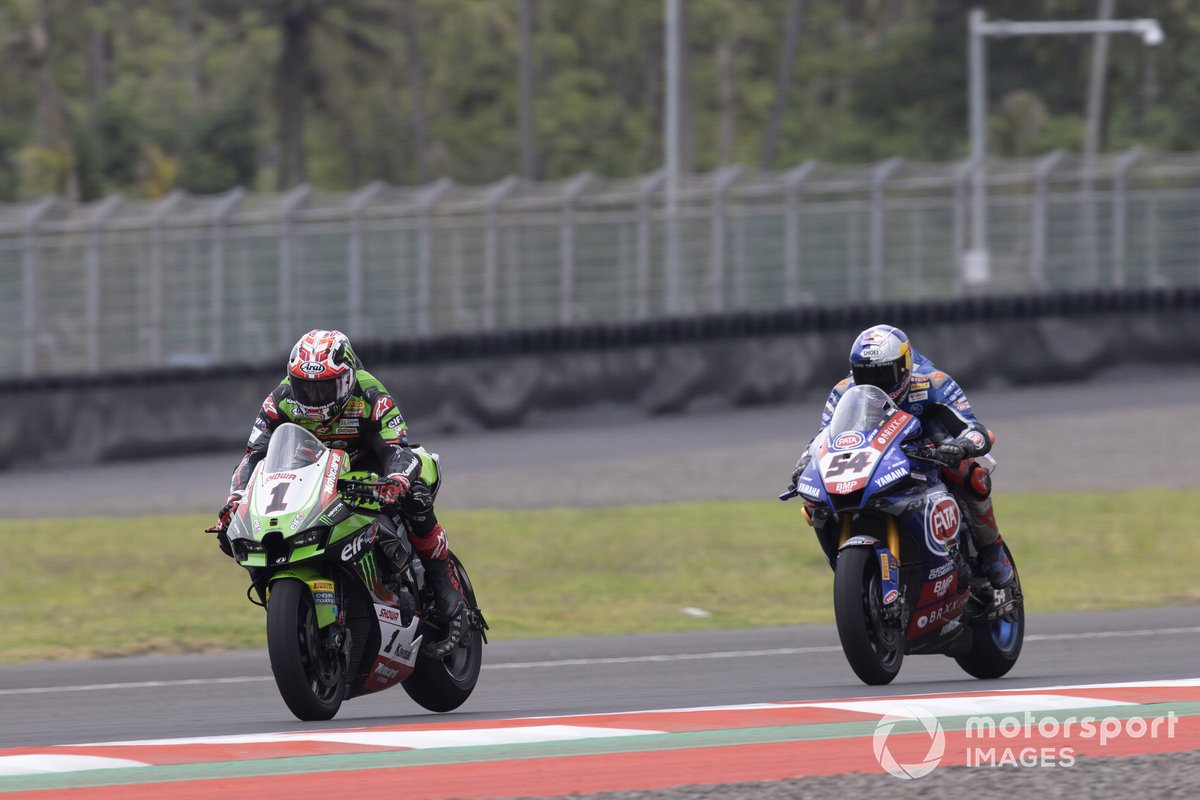 With only 62 points on offer in Indonesia, Rea’s chances of scoring a seventh title were already very slim, especially with Razgatlioglu starting on pole position.

The cancellation of the Superpole race due to poor weather on Saturday effectively ended any realistic hopes of a turnaround, with the Turkish rider sealing the championship with a second-place finish behind Rea in a delayed Race 1 on Sunday morning.

There was a risk that the second full-distance race of the weekend could also be called off to following more rain in Lombok, but organisers eventually decided to press on with it after a 90-minute delay.

Rea pointed out that the track had similarly dried out very quickly on Saturday when Race 1 was postponed and the superpole event cancelled altogether.

However, he feels it was ultimately his poor run of results in the middle part of the campaign - including crashes at Donington Park, Most and Portimao - that ultimately cost him the title.

“On Saturday the situation was very similar to Sunday,” he explained. “There was no footage of the track, really. I wasn't aware of the track conditions. So it is what it is.

“Of course, I’m disappointed [the Superpole race was cancelled] because I lost one more opportunity [to take points off Razgatlioglu]. Anything can happen in these conditions but that's racing.

“The championship wasn't lost here in Mandalika. I lost my championship in the middle of the season with a lot of careless mistakes. So, no regrets.

“Look forward to a little bit of rest now, this championship has been very condensed in a very short period of time,  a lot of testing, a lot of races, a lot of travelling. So I'm looking forward to a bit of a break before we start testing again in December.“