GRT Yamaha rider Garrett Gerloff says he is “frustrated” with himself and has apologised to Jonathan Rea after the two came together while battling for victory in the Aragon World Superbike season opener.

Gerloff started from outside the front row in the final race at Motorland Aragon, and was chasing Rea’s Kawasaki for the lead having passed the reigning champion's teammate Alex Lowes for second.

But the duo came to blows two laps later as Gerloff appeared to make a late lunge into Turn 14, forcing Rea off the track and pushing him down to fourth place.

Gerloff  fell off his Yamaha following the impact, but was able to remount the bike and rejoin the race.

The stewards deemed the American rider responsible for causing a collision and handed him a long-lap penalty, and he finished the race down in seventh place after an impressive recovery ride in the final laps.

Rea, meanwhile, was able to regain some of the lost ground to take second at the flag behind runaway winner Scott Redding on the slick-shod Ducati.

Speaking after the opening round of the season in Spain, Gerloff said he went up to Rea to apologise for the incident, and clarified that he had to take evasive action after the two riders braked simultaneously for the chicane that precedes the back straight.

“I saw the incident and for sure I’m really sorry because it was 100 percent my fault and it was a mistake that I made,” said Gerloff, now in his second season in WSBK. “I’m definitely frustrated with myself.

“Luckily I was able to see Johnny on the podium and talk with him and say that I was sorry.

“I wasn’t trying to pass, that was not my intention. My intention was not to make a pass right there, but we braked at the same time and he just started to brake harder than I was expecting. I tried to grab the lever as hard as I can but I just wasn’t stopping like he was.

"My options were shrinking, and so I tried to release the brakes and go to the inside so that I could be in front of him and maybe I wouldn't touch him, but that didn’t happen.

“It was my fault and I definitely feel really sorry about that, and so unfortunate because when I picked the bike up I did feel really good on the bike, and even before the crash I felt good and felt I had the possibility to fight for the podium for sure. I’m just frustrated with myself.” 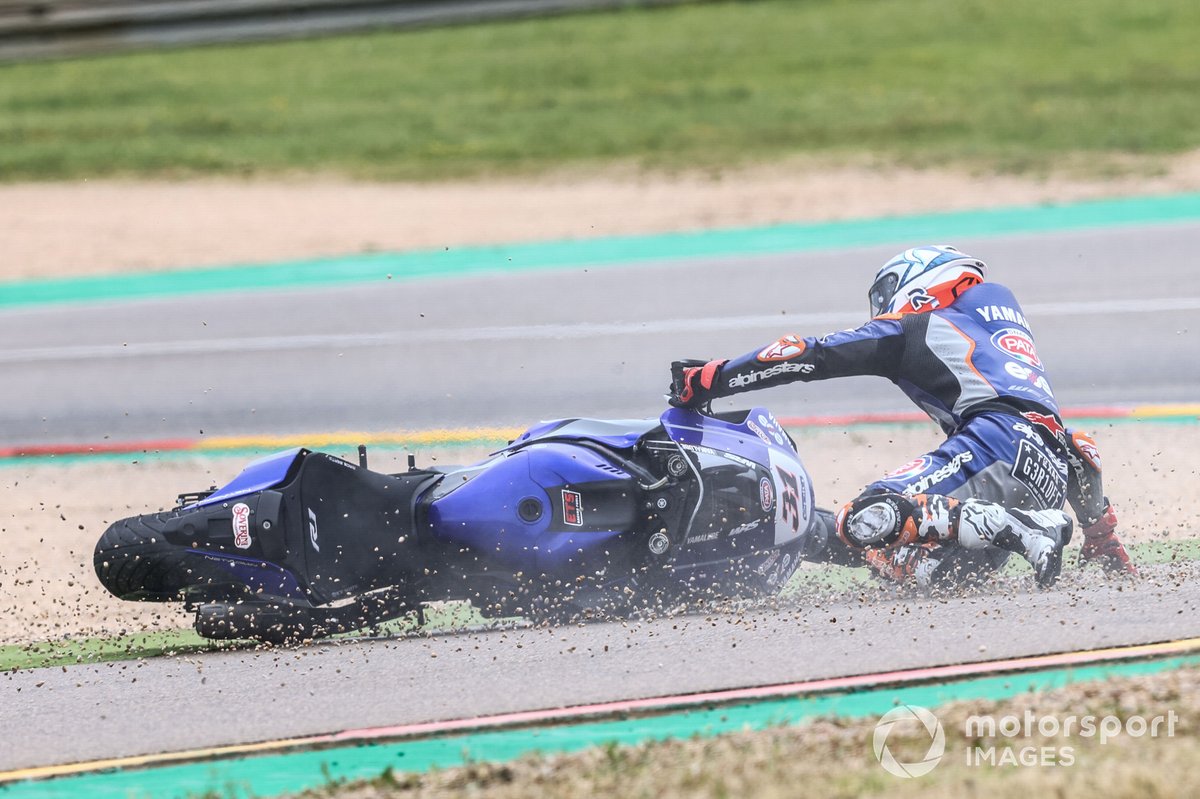 Rea, who won the opening two races of the weekend to take a substantial early lead over Lowes in the championship, felt Gerloff shouldn’t have been so aggressive in the early part of the race when it was known that both riders were at a disadvantage to Redding with their intermediate tyres on a drying track.

“Yeah, it was a surprise, especially that early in the race because everybody had a look when the tyre wrappers came off and I could see that Scott had the slick tyre, which I thought probably was the right choice,” said the six-time WSBK champion.

“With three minutes to go I actually asked my guys for a slick tyre run but [it was] too late.

"So I knew that the race would settle down at some point and Scott would come. So this manoeuvre so early on that part of the track and the line was very small.

"Luckily, I didn’t go down because [his] bike was caught in my bike but I got on the throttle and managed to disconnect with the bike. I went across the gravel pretty fast and then I could rejoin, and then a few bikes passed so I didn't gain any advantage.“