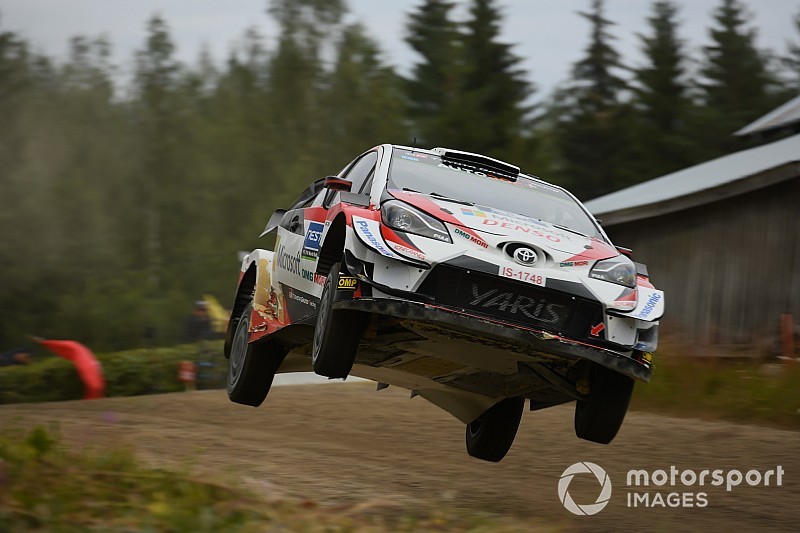 Toyota WRC driver Kris Meeke is out of Rally Finland with broken suspension after hitting a rock during the morning loop.

Meeke was fourth overnight but overhauled the Citroen of Esapekka Lappi to run third, just 2.2s off the lead after the morning’s first stage (Pihlajakoski).

He had been matching the split times of rally leader and Toyota teammate Ott Tanak, when he clipped an errant rock on a fifth-gear right-hand corner some five miles into the penultimate stage of the loop on Kakaristo.

His Toyota team confirmed that Meeke would not take any further part in the afternoon running, but that it did plan to have him restart tomorrow.

Team boss Tommi Makinen said he had told his drivers pre-event to take “control” of the rally and that there had been “no need” to push as hard as they were.

“Of course we are all very disappointed. We understood that he was in fifth gear and slid off onto the big rock and broke the rear suspension,” Makinen said. “It was still a long way to go and they had good speed, and they could really control the game still.

“Before the rally we spoke about the strategy and to just keep going and keep controlling the rally and it was really looking good, there was no reason to push that much.

“But I totally understand, rallying is hard. You can make a mistake but well, that’s the result now.”

SS14 was a difficult one for Toyota as Meeke’s teammate Jari-Matti Latvala also hit a rock which gave him a left-rear puncture.

The Finn managed to bring the car to the finish, albeit with significant wheel arch and bodywork damage to his Yaris. Latvala remains in second place overall, but is now 13.9s behind Tanak.