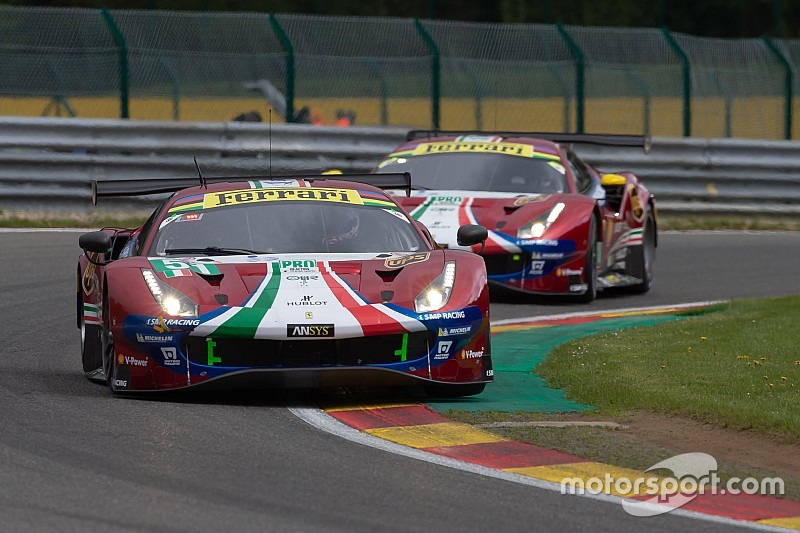 The Briton finished less than a second behind the winning Aston Martin in the AF Corse Ferrari 488 GTE he shared with Alessandro Pier Guidi in a race affected by snow and rain.

But the 2017 WEC champion believes that the two factory Ferraris were not capable of finishing any higher the ninth and 10th positions in which they qualified at the back of the class field had it been a dry race.

"The team played it really well on the strategy and the car was very competitive in the rain — that's what got us up there," Calado told Motorsport.com. "You have to be happy if you if start from P9 and finish second."

The sister AF GTE Pro entry driven by Sam Bird and Davide Rigon ended up sixth, and asked where the Ferraris would have finished in dry conditions, Calado replied: "Absolutely last - ninth and 10th."

The rain allowed the Ferrari drivers to overcome its straightline speed deficiency under the current Balance of Performance.

"We didn't go to Spa believing we could challenge for the victory, because sectors one and two are all about straightline speed," he said.

The Ferrari drivers have complained that they are unable to pass GTE Am cars on the straights as a result of the BoP.

Calado believes that he could have challenged the winning Aston Martin with Maxime Martin at the wheel had the race not been red-flagged with just over 11 minutes of the six hours remaining.

"A couple of laps more, and I would have been in a position to have a go at the Aston," he said.

Calado remains hopeful that the BoP for next month's Le Mans 24 Hours, which is not covered by the automatic system used in the shorter WEC races, will allow the Ferrari to be competitive.

The results of Spa mean that he and Pier Guidi can no longer retain their WEC crown: the GTE Pro title battle is now between the two factory Porsche crews of Kevin Estre and Michael Christensen and Richard Lietz and Gianmaria Bruni.

Estre and Christensen lead by 36 points with only 39 left to play for at Le Mans, after Bruni and Lietz were demoted from a podium finish by a post-race penalty for contact with Giancarlo Fisichella's GTE Am class Ferrari.