The #25 G-Drive Racing by Delta-ADR, Oreca 03 Nissan car of Antonio Pizzonia, Tor Graves and James Walker, crossed the line after six hours of racing as the winner.

The No.25 G-Drive Racing by Delta-ADR entry took victory at Silverstone today at the opening round of the FIA World Endurance Championship (WEC). In fact Nissan-powered cars took the top eight positions in the six-hour season-opener. 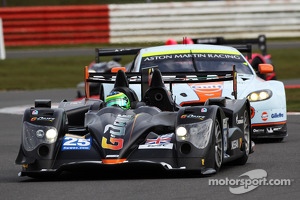 The No.25 car started the race today from pole position after a fantastic performance in yesterday’s qualifying session, which also saw the sister G-Drive car of Roman Rusinov, John Martin and Mike Conway take third place on the grid.

The skies over Silverstone promised rain throughout today, which made tyre choice difficult for the WEC teams but when the cars roared off on the rolling start it was the No.25 G-Drive car that stormed off in the LMP2 lead, hotly pursued by the No.26 car.

The No.26 car actually passed No.25 and the team were looking set to deliver a G-Drive Racing 1-2 but then nature played its hand and a sudden downpour caused John Martin to spin, which sent the No.26 Oreca Nissan tumbling down the order.

The No.25 car of Antonio Pizzonia, Tor Graves and James Walker, crossed the line after six hours of racing as the winner.

Pizzonia summed up his day, saying: “We decided to go with a completely different strategy than the sister car. This is my first ever endurance race and I’m really happy to leave Silverstone with a pole position and race win.”

G-Drive Racing by Delta-ADR’s Simon Dowson was very happy with his team today: “I would just like to congratulate all three of the drivers who took the win. They are all ‘pros’ in their own right and did a brilliant job. Antonio is a legend anyway, James dropped in right away and Tor coped really well in very tricky conditions. I am really pleased but shame we missed out on a 1-2. Next time!”

One-two victory for Audi at Silverstone