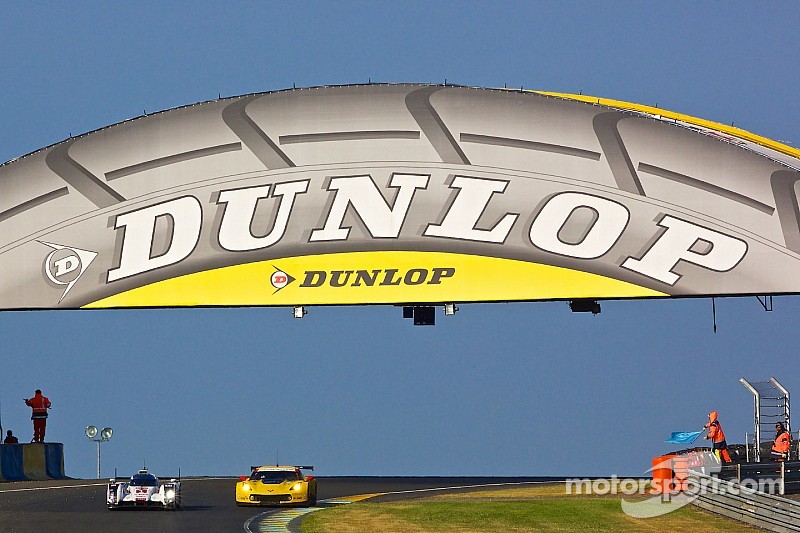 Dunlop Motorsport has continued its aggressive development for 2015, with several new enhancements for teams competing in both LMP2 and GT racing throughout the globe.

Dunlop has ruled the roost in the FIA WEC since its inception in 2012, winning all but one of the LMP2 class races. However, the company is certainly not resting on its racing laurels in 2015 and beyond.

A winter of intensive testing on both sides of the Atlantic has produced refined products for their customers.

For the LMP2 runner's mid-corner grip should be improved after some construction modelling was used to refine the 'slick' tire. The new Intermediate will offer greater durability in wet conditions but also not be sacrificed much on a drying track.

Dunlop has also delivered a new GT tire for ELMS, which it was announced last month will be exclusively supplied by Dunlop until the end of the 2017 season. The new '15 spec GT tire should provide greater performance and durability.

Sam Smith spoke to Dunlop's communications director James Bailey this week before the endurance racing season kicks off in Europe with the official ELMS and FIA WEC tests at Paul Ricard.

Subjects ranged from new and future tire developments and the future of the LMP2 class.

Is it fair to say that from a development point of view the LMP2 class has been Dunlop's focus in endurance racing these past few seasons?

"Yes it has been the key focus area for probably the last three years I would say. The reason being that it is the benchmark opportunity to be in a 'tire war' so to speak in the ELMS and FIA WEC. Although there is a diversity in chassis there is obviously more constraint (in terms of the tire regulations) than the LMP1 class. It is a category that tells us exactly where we are and what sort of job we are doing from a competitive point of view."

Where has the key focus of development been for the LMP2 tire range over the off-season?

"We have concentrated on developing a new intermediate tire. The aim is to give it a wider operating range. We need this range because the rules state there can only be two specifications of dry tires to use in an ELMS race.

"The development on the dry tires has really been just to make progressive steps forward in all the areas that matter which is durability, consistency and again having a wide enough operating range. We've found the specs we want to use and the next steps are declaring these at the Paul Ricard test later this month."

"The GT tire is a new specification but one that takes a small amount of elements from proven components from existing specs. When we learned that we had won the contract for the GT classes we took the decision to accelerate a new range and these will be available for all the competitors to use at the Ricard test.

"Key to the new 2015 specification of GT tyre is construction development and manufacturing process changes. Our engineers have significantly improved the performance of the tyre while also improving the durability."

Is it difficult to get complete parity for all your customers in terms of the product you are offering?

"We have built a good reputation in building parity and consistency in to our products in recent years. We don't have variation from batch to batch. The other area to ensure consistency in is to work on developing a tire that can work on a very diverse grid of cars.

"In GT racing there are mid-engined, front and rear engine cars and a big range of weight distributions. So getting that wider operating range and that versatility is vital to ensure our customers get equal products across different climates and temperatures too, especially as in the regulations the GT field only has one dry tire specification."

It has been rumoured that tyre companies new to LMP racing may join Dunlop and Michelin with programs. How would you feel about this?

"We would very much welcome it. We are proud of the fact that the only class in last years' Le Mans 24 Hours that had open tire) competition we were very strong and got great results. We don't sit on our laurels though and we would actually like to see more competition from other companies, as long as it is a level playing field and there is no reason to doubt that as the ACO and FIA have policed it very well."

What are your opinions of the mooted new LMP2 'controlled key supplier' plans for 2017 onward?

"Regulations are set by the governing bodies and not us, so we have to abide by the rules. Our opinion is that we enjoy and prefer open competition. The reason we have this position is that because LMP2 has been very well policed and the ACO has run their policy of having the specifications known at the very start of the year means for us there can be a tire war that is controlled but without getting in to multiple specifications to suit different chassis.

"Another reason is that if a tire manufacturer wants to enter LMP1 and you take away development in terms of competition in LMP2 there is really nowhere else to gather the knowledge in a competitive environment. There is a risk that doing away with 'open competition' could reduce the attractiveness of tire companies then going on to work with OEM's in the future in LMP1."

Finally, what future technologies do you think will be coming on stream in future tire development?

"We are always looking at future advancements but we tend to do it in incremental phases, whether it be new materials or chemicals, etc. Every year we have to go faster for longer and with more consistency. We have always used motorsport to test advanced concepts that end up going in to road cars.

"As an example you just have to study the success we had in the 1980s with the Porsche 956 and 962 which were the first race cars to use a special construction which is the forerunner to the product you get on the road these days with Goodyear/Dunlop. The tire pressure warning systems was also a good case study for a racing to road tech transfer.

"One of the next big steps in future years, perhaps not next year but four or five years down the line is the 'intelligent tire'. This would be a 'chipped tire' that would be able to send accurate tire temperature or pressure data back to the pits. The next step would then be to have sensors in the contact patch of the tire. This is definitely possible in the future in racing and we have already tested and showcased it last year at the Geneva Motor Show."