'Full attack' for the ORECA 03 teams in China

This penultimate round of the season is set to be a deciding race for the LM P2 title chase.

After a shortened race at Fuji, the FIA World Endurance Championship competitors head to China for the 6 Hours of Shanghai. 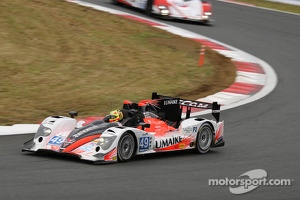 This penultimate round of the season is set to be a deciding race for the LM P2 title chase – even more so due to the last round reshuffling of the championship points.

Pecom Racing, with the ORECA 03 driven by Pierre Kaffer, Nicolas Minassian and Luis Perez Companc, are currently in second place in the Teams Trophy, 5.5 points behind the leaders.

As a result the trio of Pecom Racing drivers have little other choice but to take victory. Fourth and sixth in the championshp with their two ORECA 03 chassis, G-Drive Racing by Delta-ADR will also be looking to notch a victory.

No questions to be asked for Pecom Racing…

Halted due to safety reasons, the 6 Hours of Fuji weekend was not kind to Pecom Racing. Leaders of the Teams Trophy ahead of the Japanese round, the Argentine team found itself at a disadvantage after a seventh place qualifying effort. As a result, the team lost its first place standing in the championship 5.5 points back with two races to run.

Ahead of the season finale in Bahrain, at the end of November, the 6 Hours of Shanghai will certainly be of capital importance. Driving the No.49 ORECA 03, Nicolas Minassian, Pierre Kaffer and Luis Perez Companc already have one victory (Spa) and three podiums. The three men will be aiming for another success.

"It’s a strange situation to lose the lead in the championship when there was never a green flag" admits Pierre Kaffer. "It’s difficult for us because we worked everyday to take the lead in the LM P2 trophy, and we lose it without a fight. That said, we can’t ask ourselves any more questions. Whatever the gap to first place, we have to win the last two races.

We’ve tried to improve the car between Fuji and Shanghai and I think we’ll see some progress in terms of pure performance. Shanghai is a shortened format weekend where we’ll have to have a good car immediately. There won’t be any time to play around. With different types of surfaces, the track is often hard on tires. It will be an important factor and I think with Michelin we are in a good shape.

We are focusing on these last two races with one goal in mind: to win them. Whatever our position in the championship after Shanghai, what counts is our final position at season’s end. We are going to give it our all to take the title. It’s a tight battle in LM P2 so it will be a 'full attack' !"

G-Drive Racing by Delta-ADR for a fourth win?

Although G-Drive Racing all but said goodbye to its championship hopes at Fuji, the team running under the Russian banner will be looking to continue on a good trend. Since after the 24 Hours of Le Mans, the No.26 ORECA 03 driven by John Martin, Mike Conway and Roman Rusinov have two victories, a podium, two poles positions and one first row start! It’s a trend the trio of drivers hope to continue in China.

The sister car, entered under the Delta-ADR name, will be looking for a solid podium finish after winning at Silverstone earlier in the season. Tor Graves will be joined by Robbie Kerr, a team regular, and Craig Dolby, a 25 year old British driver and winner of the Formula Renault 1.6 Belgium in 2006 and twice runner-up in the Superleague Formula. He will be making his debut at the wheel of the ORECA 03.

One year ago, Delta-ADR took the win at the 6 Hours of Shanghai with one ORECA 03 driven by John martin, Tor Graves and Mathias Beche. The three ORECA 03 on track will be powered by a Nissan V8 prepared by the ORECA engine department at Magny-Cours. This package has already notched eight wins this season.