Iguchi and his teammate aboard the #61 R&D Sport-run Subaru, Hideki Yamauchi, finally gave the new-for-2021 BRZ its first win after a dominant run from pole - ending a three-year winless run for the squad.

Subaru had claimed two other pole positions earlier in the season, at Fuji and in the previous round at Suzuka, but Iguchi and Yamauchi could only manage second at Fuji and a disappointing 10th at Suzuka.

Following the events of Suzuka, Iguchi said he felt a sense of relief that Subaru was finally able to demonstrate that its Dunlop-shod BRZ can be a force over a race distance as well as a single lap.

Iguchi said: "Since the new BRZ debuted, it appeared that, 'in qualifying we can get pole, but the race is a bit...' maybe I have been over-thinking, but on Saturday night it was really hard to sleep.

"But as a result of all the things the team and the tyre maker did, we showed this result, and we were finally able to show everyone in the team and all the fans that the true strength of the new BRZ, so I felt a strong sense of relief when I was stood on the start line [celebrating victory]."

Subaru broke with convention for the Sugo round as Iguchi took the start, and maintained the lead through the pitstop phase as Yamauchi took over for the second stint.

A fierce battle with the #55 ARTA Honda NSX GT3 of Ren Sato followed, with the two cars making contact at one stage, but Yamauchi was able to hold firm and finally pull away to win by 11.4 seconds.

"For the first time in several years I was in charge of the start, but I was able to hand over to Yamauchi with good momentum and he was able to finish well with brilliant pace," said Iguchi.

"I think this victory has eased the minds of the team, drivers, and tyre manufacturer a bit, and I think we'll be able to go into the second half of the season in a better state." 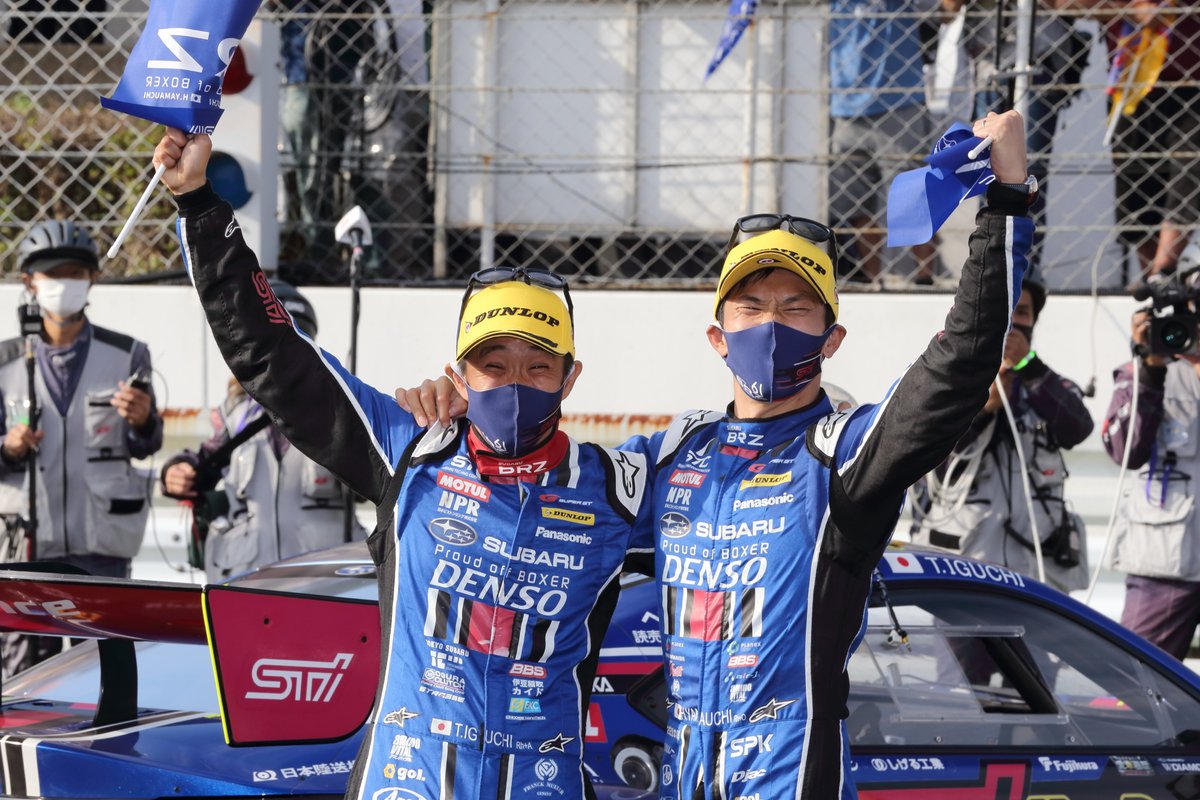 Victory for Iguchi and Yamauchi at Sugo has propelled them to the top of the GT300 drivers' standings with three races to go, a single point ahead of defending champions Joao Paulo de Oliveira and Kiyoto Fujinami, who finished third in their Kondo Racing Nissan GT-R NISMO GT3.

The Subaru will be one of three cars carrying the maximum 100kg of ballast next time out at Autopolis, along with the Kondo Nissan and the Max Racing Toyota GR Supra GT300 that had led prior to Sugo.

"I think what we tried in the Autopolis test [the week before the race] was the solution," said Yamauchi. "We had problems this time as well, but compared to the past, it's something we can control.

"But I believe the #56 [Kondo Nissan] will still be fast with even more weight, and the #55 was fast this time. We still have a lot of work to do to improve, but I think we've definitely taken a step forward.

"Even though we won this time, the job's not done, and we need to stay focussed and work harder for the championship. We'll discuss the things that didn't work this time and do our best to show everyone a stronger BRZ."