Honda scored the first SUPER GT victory with its new front-engined NSX-GT in the second round of the season at Fuji Speedway, as Real Racing earned its first win for more than two years.

Bertrand Baguette and Koudai Tsukakoshi took an ultimately dominant win in the #17 Honda, having been locked in battle with the #8 ARTA NSX for much of the race until Tomoki Nojiri spun while under pressure from Tsukakoshi on lap 36 of 66.

It marks the first win for Baguette and Tsukakoshi as a duo, as well as the Real Racing team's first win since the 2018 Okayama season-opener.

Polesitter Nirei Fukuzumi controlled the early stages in the ARTA Honda, but couldn't shake off the advances of Baguette, with the pair quickly gapping the rest of the field.

Never falling much more than a second behind Fukuzumi, Baguette made his move on lap 15 to seize control and over the following laps the Belgian built up a small buffer out front.

Baguette had around six seconds in hand when he pitted on lap 30 to hand over to Tsukakoshi, but a slightly slow stop combined with some impressive laptimes from ex-Formula 2 racer Fukuzumi before making his own stop on lap 35 turned the tables.

Nojiri resumed just ahead of Tsukakoshi and the battle between the two Honda drivers appeared set to rage for the rest of the race until Nojiri simply lost control of the ARTA machine exiting Turn 12 while being shadowed by his rival.

That left Tsukakoshi with a massive 21s lead over the #36 TOM'S Toyota of Yuhi Sekiguchi, which he duly nursed to the finish, ultimately winning by 15s.

Despite carrying 30kg of success ballast, TOM'S pair Sekiguchi and Sacha Fenestraz matched their result from the season opener, with Fenestraz moving up from sixth to third in his stint and Sekiguchi inheriting second after Nojiri's mistake.

Completing the podium was the #14 Cerumo Toyota of Sho Tsuboi and Kazuya Oshima, who also repeated their result from three weeks ago after moving up from eighth on the grid.

Tsuboi secured the place after passing the Impul Nissan GT-R, which ran third in the early stages with Kazuki Hiramine driving but slipped to sixth in the hands of Daiki Sasaki.

Round one winners Nick Cassidy and Ryo Hirakawa followed up on their win with fourth place in the #37 Toyota despite carrying 42kg of ballast, although they surrendered the lead of the championship to TOM'S stablemates Sekiguchi and Fenestraz by one point.

Completing the top five was the Team Kunimitsu Honda of Naoki Yamamoto and Tadasuke Makino, with Yamamoto passing Sasaki on the penultimate lap.

The SARD Toyota of Yuichi Nakayama and GT500 rookie Sena Sakaguchi slipped from third on the grid to an eventual seventh, ahead of the #38 Cerumo Toyota in eighth.

Nissan's two Michelin-shod cars were the final scorers, the NDDP/B-Max Racing machine of Katsumasa Chiyo and Kohei Hirate heading up the works NISMO car of Ronnie Quintarelli and Tsugio Matsuda, who suffered a difficult race from fifth on the grid.

The ARTA Honda finally finished in 14th and three laps down after taking a second pitstop.

UPDATE: The Impul Nissan was handed a 40-second time penalty for Sasaki's late contact with the #11 Gainer Nissan GT300 car, dropping the #12 car to 11th and out of the points.

In the GT300 class, Cars Tokai Dream28 scored its first victory with its Lotus Evora, also taking a first victory for a ‘Mother Chassis’-based car since 2018. 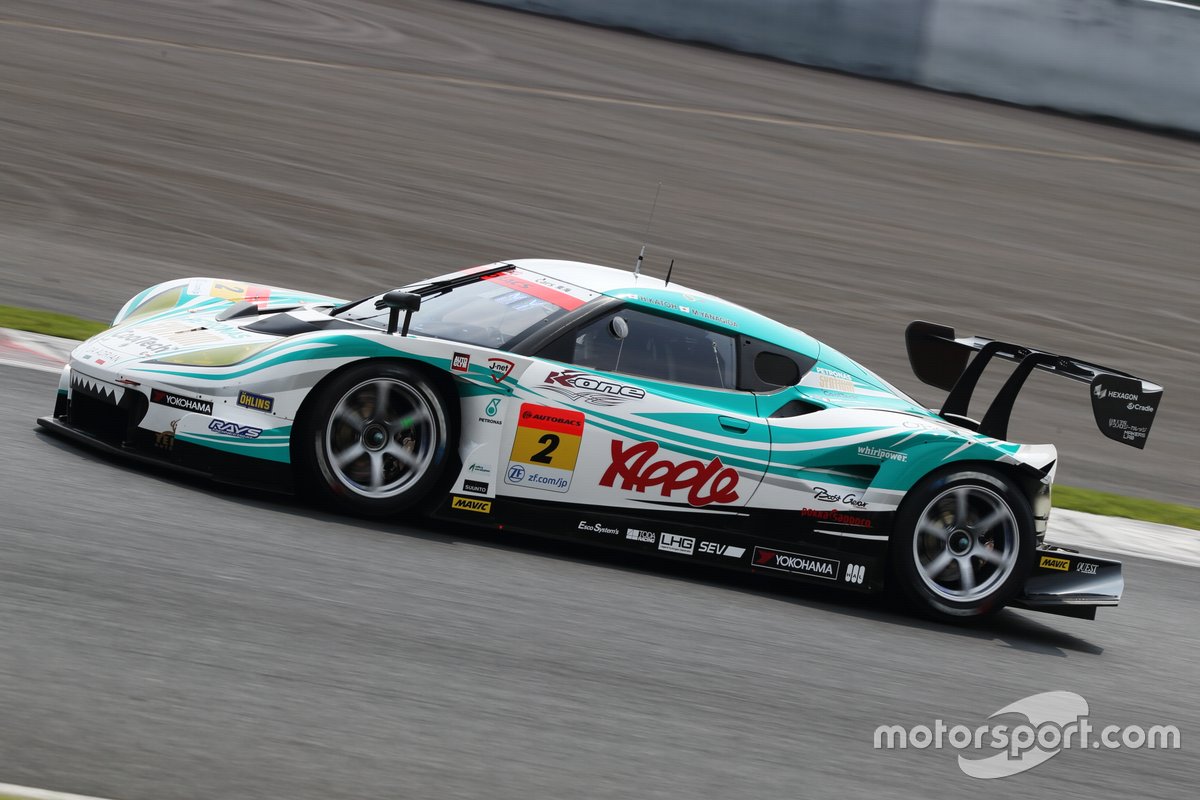 Hiroki Katoh ran second for much of the opening stint behind the R&D Sport Subaru BR-Z of Hideki Yamauchi, but left his pitstop four laps later, and when Masataka Yanagida emerged from the pits in the #2 Lotus he had almost four seconds in hand over the Subaru.

Yamauchi's teammate in the #61 Subaru, Takuto Iguchi, managed to close to within 1.5s of the leaders at the finish but had to settle for second.

The ARTA Honda NSX GT3 shared by reigning champion Shinichi Takagi and new teammate Toshiki Oyu completed the podium in third thanks to a late pass by Oyu on the LEON Racing Mercedes-AMG GT3 of Naoya Gamou, who hung on to fourth.