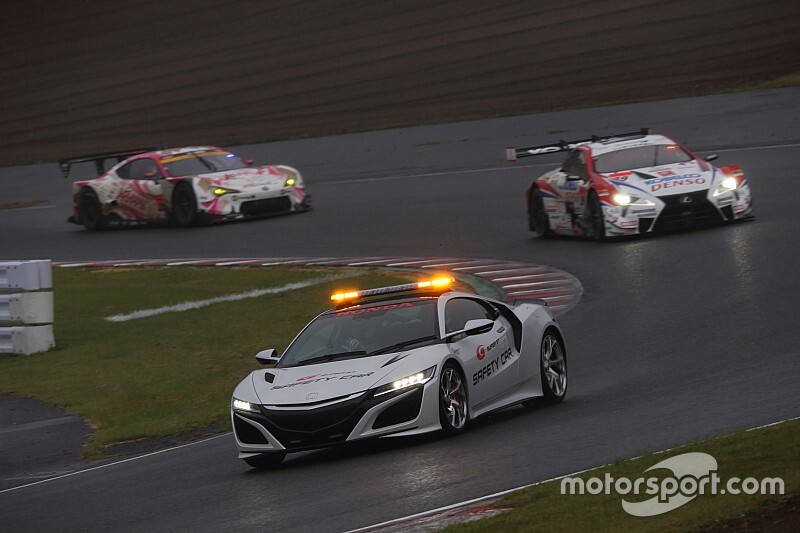 SUPER GT is considering the introduction of a Full Course Yellow (FCY) system akin to the one used in Formula 1 and the FIA World Endurance Championship, GTA Chairman Masaaki Bandoh has revealed.

The Japan-based series completely relies on the conventional safety car, which also assists in the deployment of the First Response Vehicle (FRO) to the scene of the accident.

However, safety car periods in SUPER GT tend to last longer than most series, as the series’ rules require GT500 and GT300 cars to be separated by bringing the field to a momentary halt.

Another peculiarity about SUPER GT is that no pitstops are allowed when the safety car is deployed, and this rule has often led to some dramatic shake-ups in race order.

The most striking example is of the Fuji 500-mile race in August, where the LeMans Lexus team was able to enter the pits moments before the SC was called, essentially gaining a free stop.

The remainder of the field had to wait for the SC period to end before they could complete their own stops, giving LeMans duo Kazuya Oshima and Kenta Yamashita a one-minute lead.

Combined with their victory at the previous round, Oshima and Yamashita were able to build a championship advantage that they will carry into November’s title at Motegi.

Heikki Kovalainen and Yuichi Nakayama’s first win of 2019 at Autopolis was also partly assisted by safety car. With the field bunched up, the SARD Lexus duo were able to move into the lead on wet tyres and then build enough of a buffer for the dryer final part of the race.

Bandoh admits that there are several hindrances in introducing FCY, including the requirement to install necessary equipment at each circuit in Japan.

While Fuji, Suzuka and Motegi are all used for major other international races, Autopolis, Sugo and Okayama aren’t visited by any global series.

“I'm thinking about the introduction of FCY,” Bandoh said. “However, what should we do with the cost aspect, the transponder aspect and so on? That's what I'm talking about.

"At the time of the Suzuka 10 Hour, I tried to do [FCY] with Blancpain, but it was something Suzuka’s facilities made it possible to do.

"When it comes to having FCY at each circuit, you have to talk with the organiser about maintenance. I think this plan is difficult [to realise] with our hands alone.”

SUPER GT has also called in for support from fellow Japanese series Super Formula and Super Taikyu. Should all three series agree to adopt FCY, Bandoh believes there will be a better case for circuits to adopt a permanent solution.

"It might be possible to use the relay cable that we have, but it will only be used for our series,” he said. “If you have other races, such as Super Formula or Super Taikyu, and have the same idea, you can think of a permanent option on each circuit.”