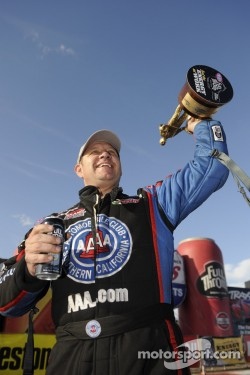 GAINESVILLE, FL (March 5, 2012) --- As the NHRA starts its season on the East Coast at the 43rd annual Tire Kingdom NHRA Gatornationals Robert Hight and the Auto Club Ford Mustang team want to keep their momentum rolling. Hight sits in second place in the Full Throttle Funny Car point standings sandwiched between two of his John Force Racing teammates, Mike Neff and John Force. A recent win at the NHRA Arizona Nationals has Hight riding a wave of confidence going into Florida.

“I had been to the finals in Phoenix twice before and I felt like I let them slip away. I didn’t want to do that this year. If you would have told me a 4.13 would get a win light versus Neff in the final I would have said you were crazy. (Crew chief) Jimmy (Prock) has this Auto Club Mustang ready to race every pass. That gives me so much confidence,” said Hight.

With the Phoenix win Hight extended his streak of winning a race every year he has competed (seven straight) and he jumped into the No. 2 position in points. Neff has reached back-to-back finals this season and will be returning to Gainesville as the points leader and to defend his 2011 Gatornationals victory. The duo at the top of the points sheet knows the season is long and it is the Countdown that matters.

“I love getting off to a strong start. Seeing Neff race to both finals and seeing me and John in the winner’s circle is great for Ford Racing, Auto Club, Castrol, and all our sponsors. The key is to run consistent all year and that is hard to do. I want to focus on doing the little things right all season. Neff and Jimmy talk all the time and I know all the crew chiefs share info. We have a great group of crew chiefs and it is awesome to see John Medlen back in our pits,” said Hight.

On race day it is every man and woman for themselves. We have had all JFR finals the first two races and booth winners were surprises. Neff has had the strongest car but the worst luck in the finals. Now we need for Mike to get a win and for Courtney (Force) to keep developing. We want to have half the Funny Cars in the Traxxas Nitro Shootout which I think is doable with the way the system is set up. It was cool when I saw my name on that sign that said I was in the Shootout. Jimmy has won big money at Indy before and I want to get my hands on that $100,000.”

The first seven Funny Car and Top Fuel drivers to win in 2012 will lock up a spot in the inaugural Traxxas Nitro Shootout during the Mac Tools US Nationals. The winners (Funny Car and Top Fuel) of this race within a race will win $100,000. So far Force and Hight have the first two Funny Car slots and Spencer Massey and Antron Brown are secure in the Top Fuel field. If there are not seven winners at the Brainerd cut off, the remaining spots will be filled by top finishers in points with the final spot being filled by a fan vote/lottery.

The historic significance of the Gatornationals will be at the forefront for Hight and the rest of the drivers competing in Gainesville when you consider this is the 20th anniversary of Kenny Bernstein breaking the 300 mph barrier. As a student of the sport Hight knows getting a win at the Gatornationals ranks up at the top of anyone’s career highlights.

“The Gatornationals is a special race. When Kenny broke the 300 mph barrier that was so big for our sport, it definitely proved we were the fastest motorsport and had some of the most dominant teams. Now 20 years later we are celebrating that achievement and I would also like to be celebrating in Gainesville. I haven’t even reached the finals here and I want to get that win,” said the 24-time winner.

The nearly three week lay-off between Phoenix and Gainesville gave Hight the chance to go back in time. The first weekend of March Hight was in Bakersfield, Calif., at the March Meet enjoying the sights and sounds of nostalgia Funny Cars and hot rods from years past.

“You see the Funny Cars like the Blue Max and you just get chills. Those were the stars of the sport and they are the reason I am lucky enough to be racing professionally. You can’t forget your past and you have to keep an eye on the future too. It was a great weekend in Bakersfield but when I heard those Funny Cars fire up and do their burn outs I wanted to get to Gainesville as fast as I could,” said Hight.

Last year Hight picked up first time wins in Bristol and Reading so getting another first time double win by adding the Gatornationals to his Phoenix win would have Hight sitting in a great position to start the season. Unless HIght faced Neff in the final again he would also be in position to extend his streak of leading the points during the season something he has done every year of his career.

“Leading the points now is great but you really want to be leading the points when the Auto Club Finals are over in November. Every win matters no doubt about it and getting multiple wins in a season again would be a big deal. We know the season is a marathon not a sprint and if you look around our class you see a lot of world class teams that can get hot at any time. We want to be in a position to get hot, stay hot and win another Full Throttle Funny Car world championship,” said Hight.