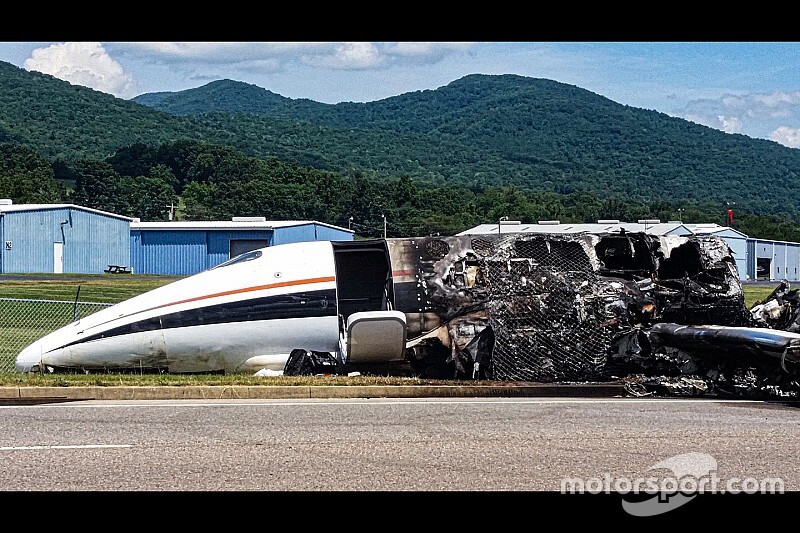 Motorsport.com's countdown of the biggest stories in racing in 2019 continues with another that did not take place on the race track – the horrific plane crash involving former NASCAR driver-turned-analyst Dale Earnhardt Jr. and his family.

While Earnhardt’s driving career has been relegated of late to one Xfinity Series race per season, he remains one of NASCAR’s most popular and iconic figures, particularly from his continued work in the second half of every season with NBC Sports.

In August, as NASCAR’s summer weekend at Bristol (Tenn.) Motor Speedway was getting underway with Truck series practices and a race on Thursday the 15th, word came of a plane owned by JR Motorsports that had crashed at a nearby airport in Elizabethton, Tenn.

Private plane usage remains high in NASCAR, with drivers, teams and team owners taking advantage of its benefits over the often unreliability of commercial airline travel.

Details were slow to emerge of the incident but it soon became clear it was very serious.

According to Carter County (Tenn.) Sheriff’s department, Earnhardt’s Cessna Citation 680 ran off the end of the 5,000-foot airport runway about 3:38 p.m. ET, traveled about 200 feet across a grass field then plowed into a fence which surrounds the airport property.

The torn fencing wrapped itself around the plane’s fuselage as it came to a stop just alongside Tennessee Highway 91. Jet fuel poured across the highway, down the nearby culvert and across the street into an adjoining stream, and eventually caught fire.

EMTs were on the scene “within minutes” and Earnhardt, his wife, Amy, their infant daughter, Isla, the two pilots and the family dog were already out of the plane when they arrived.

The scene itself looked straight out of a movie – the plane came to rest near a road, and its rear section completely burned out. The fencing that had wrapped around the plane had only missed covering the plane’s door by a foot or so.

“The plane was sliding down to the road, it was already in flames and smoke billowing,” witness Sissy Moody said. “As soon as it stopped, a dog came out and then I guess it was Dale with his baby and then his wife and then the two pilots were right behind them.

“Then Dale went on to the ground about 30 or 40 feet from the plane. This tunnel was in a blaze, the plane was in a blaze. I was already running across the ground saying, ‘There are people in there!’ but I was amazed they had already came out.”

Earnhardt was transported to Johnson City (Tenn.) Medical Center, where he was treated and released for what were described as “minor injuries.” He arrived at the track hours later but NBC Sports execs gave the driver the weekend off to spend with his family after the accident.

The extent of Earnhardt’s physical injuries were bruising and swelling to his lower back but he admitted in the weeks afterward the accident was a “very tough experience to go through.”

“I try not to think about it too much. Things happen for a reason. You just try to learn from it and move on,” he said. “I love my daughter so much and enjoy being around her and look forward to watching her grow up and experience a lot of things with her going forward.

“That just made me realize that much more. I’m just thankful and ready to live our lives.”

Earnhardt felt good enough to stick with his lone Xfinity Series start at Darlington on Aug. 31. He started 14th and finished fifth in his first appearance at a track since the accident.

“You just never know how good you are till you come back and try,” said Earnhardt, 45. “This is elite, all these guys in this field do this every single week and they’re very, very talented. So, to think you can take a whole year off and come back and be good is overthinking it. I wasn’t too sure, but we did alright.”

A preliminary report from the National Transportation and Safety Board determined that after failing to “go-around” following two bounces along the Elizabethton Municipal Airport runway, Earnhardt’s jet touched down a third time with just 1,000 feet of pavement remaining.

The right main landing gear collapsed, and the outboard section of the right wing contacted the runway shortly after the third touchdown.

The final report from the NTSB has yet to be released.

Earnhardt and his family have been through several scary and tragic incidents over the years, most related to on-track action.

In 2001, Dale Earnhardt Sr. – who was competing with his son for the win in the season-opening Daytona 500 – died in a last-lap crash.

In 2004, Earnhardt Jr. was practicing for the American Le Mans Series race at Sonoma (Calif.) Raceway when a crash engulfed his Corvette in flames. He suffered second-degree burns but made a full recovery.