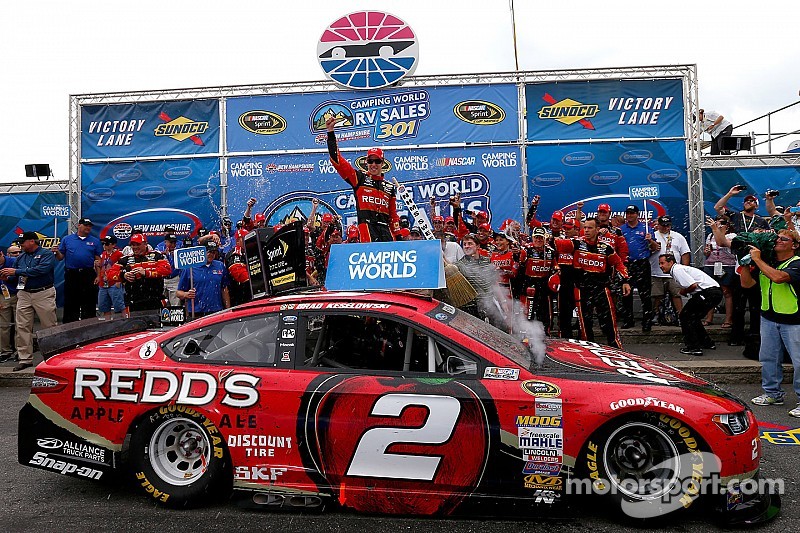 Chevrolet has long had a stranglehold on Indy.

Is it time for Ford to shoot for the moon?

The Blue Oval manufacturer is enjoying a breakthrough season. Led by Team Penske’s five victories, Ford drivers have racked up eight wins through 19 races this year—two more than they posted collectively in 36 points-paying events in 2013.

The win by Brad Keselowski (in photo) on Sunday at New Hampshire Motor Speedway was the fourth straight for Ford, marking the first time since 2001 that the automaker has won four consecutive races in the NASCAR Sprint Cup Series.

Dale Jarrett accounted for three of those triumphs, at Darlington, Texas and Martinsville, in the No. 88 Robert Yates Racing Ford. Elliott Sadler took a checkered flag for the Wood Brothers at Bristol in the second race of the string.

Ford’s streak is even more impressive this time because of the tracks involved: a road course (Carl Edwards at Sonoma), a 1.5-mile intermediate speedway (Keselowski at Kentucky), a restrictor-plate superspeedway (Aric Almirola at Daytona) and a one-mile flat track (Keselowski at New Hampshire).

To keep the streak going, however, Ford drivers will have to reach for and grab the brass ring at 2.5-mile Indianapolis Motor Speedway, a track unlike any other.

Only one problem. Chevrolet has had an absolute stranglehold on Indy, having won the Sprint Cup race there for the past 11 years.

Does Ford have a realistic chance at breaking the monopoly, or will it simply be a case of tilting at windmills? We’ll find out on July 27.