Aric Almirola's playoff hopes have been put in serious jeopardy following a crash while leading at Talladega Superspeedway on Sunday. 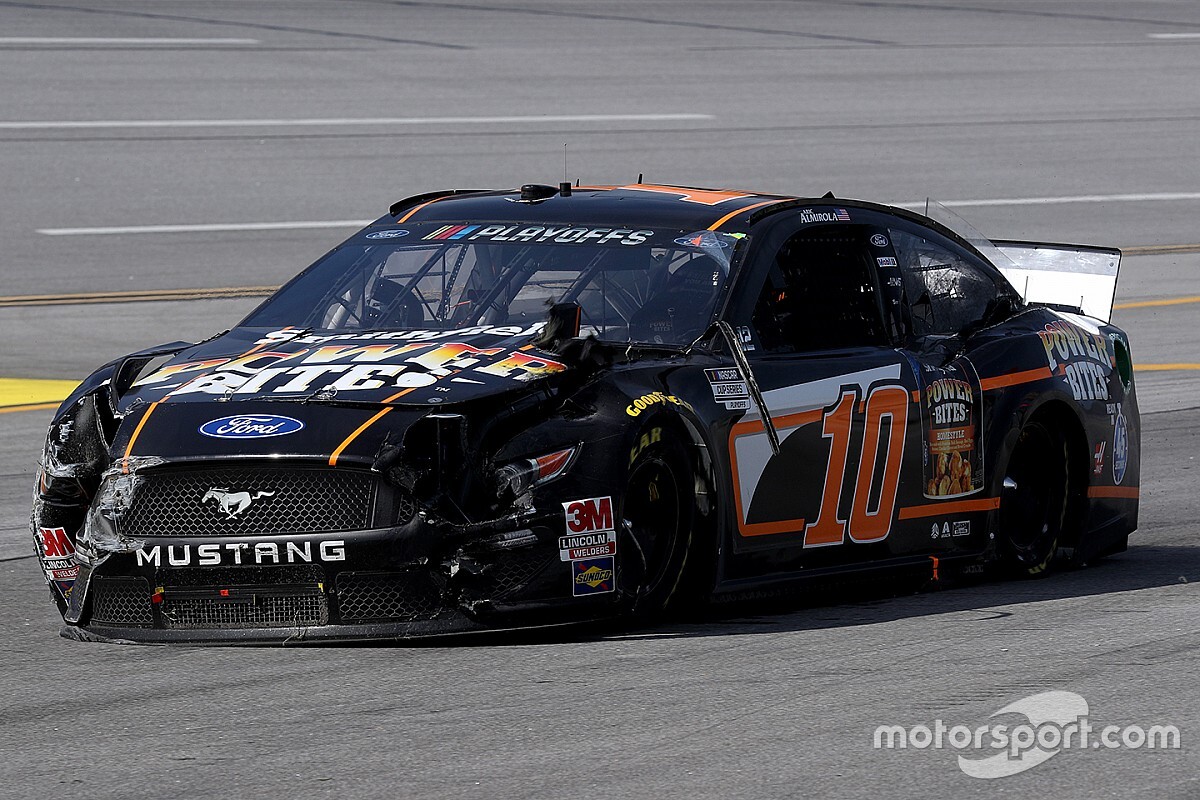 Almirola was leading the field when playoff rival Alex Bowman got a run exiting Turn 2. The two drivers came together and Almirola ended up in the outside wall.

Kyle Busch was collected as well and spun to the inside, briefly going airborne as he collided with Ryan Blaney. The rest of the field avoided the carnage with Joey Logano sustaining minor damage.

Almirola, who entered this race behind in the playoff standings, was unable to continue. This puts the Stewart-Haas Racing driver in a must-win situation at the Charlotte Roval next week.

“I’m okay," said Almirola, who finished 37th. "I honestly haven’t seen the replay, so it’s hard to say, but I got hit from behind and turned in the outside fence.  It’s such a shame.  We had such a fast Smithfield Power Bites Ford Mustang. I’m just disappointed. We were doing everything we needed to do. We were closing in to the end of stage one and it looked like we were gonna score a lot of points there, which is exactly what we needed to do. It looks like he got to my outside and my car started to turn to the right, so it’s unfortunate. I don’t know if he got in the back of me and hooked me or how that played out, but my car just made a hard right into the fence.

"It’s unfortunate. I had a lot of confidence going into today. I thought we were gonna have a good shot to win.  Our car was so fast, but unfortunately the Good Lord had different plans for us today. We’ll go onto the Roval and try one more time.”

Busch soldiered on despite suspension damage, but a left front tire failure soon after destroyed the fender of the No. 18 car, further complicating things for the reigning series champion.

Bowman's situation is less bleak as he had a 20-point buffer entering Talladega, and he was also able to continue despite nose damage.

Later on during the second stage, a massive crash halted the race after Clint Bowyer made contact with Jimmie Johnson. Kurt Busch was sent airborne and the incident ended Bowyer's race, putting him in a must-win situation at the Roval just like his SHR teammate Almirola. The race was red-flagged.

“You’ve got to go," explained Bowyer, who finished 33rd. "You’ve got to push him. The 22 (Logano) and the 21 (DiBenedetto) were trying and obviously they gave up on it for some reason.  As soon as I got to him I push him in the front and the whole rear of the car went down and I was like, ‘Oh my God,’ and before I know it he was tank swapping all over the place.  I don’t know if that was how they had their cars built or whatever, but as soon as you got close to him he was all over the place.  Obviously didn’t mean to wreck him, but you’re going hard and three-wide and people are behind you pushing.  I was hoping he would save it, but he didn’t and we all wrecked.”

Kyle Busch also received additional damage in the incident when he spun sideways and was hit in the door by Brenden Gaughan. His race would finally end when he was collected in yet another accident on an overtime restart, finishing 27th. He will enter the elimination race 21 points below the cut line.

Austin Dillon plans to "create our own destiny" at Talladega