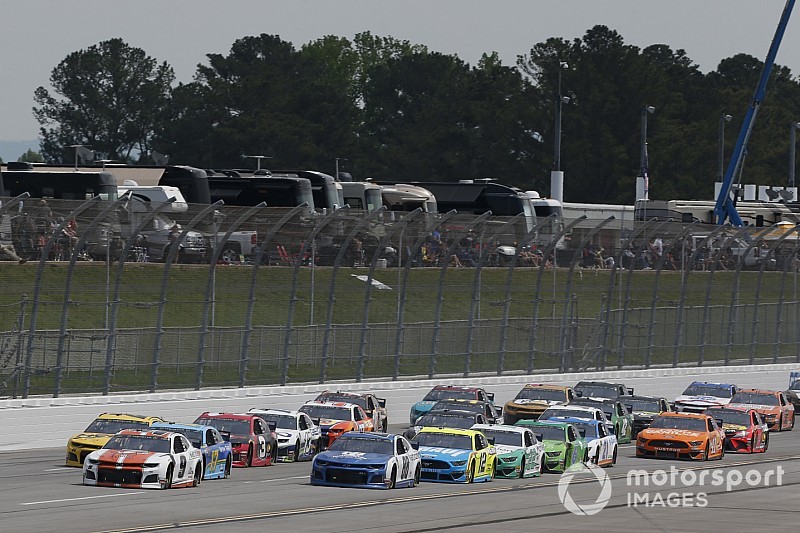 After one of the more competitive races at Talladega (Ala.) Superspeedway in recent memory, the NASCAR team examines the rules package and looks ahead to Dover.

What did you think of the racing at Talladega on Sunday?

Jim Utter: For me, it was one of the best superspeedway races I have seen in a long while. There were some wrecks but not one that collected half the field or more and most of the excitement came from the actually racing on the track, that featured a lot of passing and cars able to make moves while not always having to depend on others to do so. If the race had stayed green I think we would have seen a wild one-on-one battle between Chase Elliott and Alex Bowman to the finish.

Nick DeGroot: It was phenomenal. Much better than the previous package. The suck-up was huge, drivers were able to make big moves and very rarely were they able to get single-file. It was an exciting race from start to finish and gets an A+ from me, just wish we'd gotten a green finish in the end.

Tim Southers: I really enjoyed the race and was definitely more entertained in the race there than any last season at the 2.66-mile track. There was a lot of passing for the lead and throughout the field. Cars were able to move around - and more importantly - move up through the field and contend for positions throughout the entire race. The win by Chase Elliott was also a popular one for the younger fans that NASCAR desperately needs to get excited and more invested in the sport.

Do you think the manufacturer loyalties helped or hurt the racing at Talladega?

Jim: I think in some ways it helped. About 3/4ths of the way through the race, Fords and Toyotas dominated the top-10 of the race - which they have done in many of the most recent superspeedway races. Without the Chevrolet teams continuing to work together, I'm not enough of them would  have found their way back to the front to contend for the race victory, let alone win it. I don't have any problem with manufacturers wanting their drivers to work together so long as it's everyone for themselves when it comes down to taking the checkered flag.

Nick: We've seen manufacturer loyalties hurt the racing at Talladega/Daytona in the past, but that was because the package allowed them to. We saw how Stewart-Haas Racing absolutely owned last fall's race at Talladega. But with the current package, teammates can work with each other, but don't expect to be able to control the entire race. It was also interesting to hear the teammates getting frustrated as they tried to work together within the hectic pack.

Tim: I think it obviously worked better for the fans in seeing a more competitive race and I think this could be the beginning of a trend at Talladega and Daytona that could ultimately benefit the race fans. I think it definitely helped Chevrolet as they still seem to be just a tad behind the Ford and Toyota teams in overall consistency on a weekly basis.

So far each of the three Dash4Cash Xfinity races have been won by a driver eligible for the $100,000 bonus. Will it happen again at Dover (the eligible drivers are Tyler Reddick, Gray Gaulding, Christopher Bell and Chase Briscoe)?

Jim: There is definitely a good chance as Bell won at Dover last fall after leading 110 of 200 laps. However, Justin Allgaier has also been very strong at The Monster Mile of late, including a victory last spring and it would not surprise me if he ruined the Dash4Cash streak and collected another win.

Nick: I believe it will come down to Reddick and Bell for the Dash 4 Cash money and the race win with Bell being my choice to take them both. He has just two starts at Dover, but won in just his second attempt.

Tim: I’ve predicted him in the past so far this season and he’s yet to make me look smart, but I still think once Justin Allgaier will reel off a bunch of wins in 2019 once he gets his first one and that could come on Saturday and keep the four out of the money. As for the contenders eligible for the $100,000 Dash for Cash bonus, it will be hard to bet against Christopher Bell at Dover.

Dover was the last track Jimmie Johnson won a Cup race at nearly two years ago. Do you think he can end his winless streak this weekend?

Jim: I would like to think so but I'm just not sure Hendrick Motorsports has turned the corner enough in its performance and in its ability to get a grasp on this new rules package for Johnson to contend for the win. Stranger things have happened and if there is a track Johnson's experience could make the difference in the outcome, it is certainly Dover.

Nick: Unfortunately, I don't think the No. 48 team are at a place right now where they can get a win outright. Dover is a chance for him to get a good result, but they'll need a little help in order to snag the race win.

Tim: I agree, I don’t know if the cars will be able to put him in Victory Lane, but if there is one track that I feel Jimmie Johnson could ‘will’ his way to a win with experience and ability behind the wheel it would definitely be the Monster Mile at Dover. I also think if he wins, we’ll see one of the wildest celebrations ever from 7-time in Victory Lane.