Ready or not, restrictor plate knock-out qualifying on deck

It’s been one of the most talked about subjects in the NASCAR Sprint Cup Series garage over the last two weeks and ready or not, NASCAR’s first restrictor plate “knock-out” qualifying session is on deck for Saturday afternoon (1 p.m. ET on FOX).

With a vast array of opinions throughout the garage from drivers to crew chiefs to even owners, no one really knows what to expect tomorrow afternoon, but overwhelmingly one word has been used to categorize what lies ahead: “unpredictable.”

“I don’t think anyone knows for sure what’s gonna happen,” Logano said. “I will say that we have a little game plan to work and try to make sure our cars not only stay safe, but are able to go out there and post a good lap and just try to get through all of the segments. Our car is still the only car to get through every [qualifying] segment this year so far. 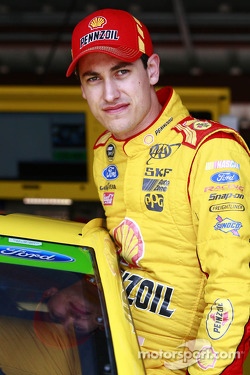 That’s something to be proud of. This is the one real wild card because there’s a good chance the fastest car may not get the pole this week. That’s gonna be something very different. There’s a lot of strategy that’s gonna go into this.

“I think there will be a point that there are gonna be a lot of cars out there. I think you have to put your lap up very quick because I think after the first five minutes the top 18 cars or so are probably gonna pit, and not be out there. So the less cars that are on the race track, the harder it is to run that fast lap.”

Six-time and defending NASCAR Sprint Cup Series champion Jimmie Johnson still doesn’t know what his Chad Knaus-led team will do tomorrow, but he’s confident that whatever his Hendrick Motorsports group decides, it will be the right call.

“I don’t know what is going to exactly happen,” Johnson said. “But to win the pole, you’re going to have to go out there and race. And the run that you can get on a group that is a football-field-or-two ahead of you, is so dramatic that I even think that a 10 or 12-car line won’t be as fast as somebody who falls way back in the pack and has a chance over a lap or two to pull up into the pack. So that’s what every driver is going to try to do. And setting that up is going to be tough because one, everybody is going to be trying it; and two, if you see someone behind you coming, why are you going to stay on the gas to help them? So, bailing out of the gas, breaking up the pack, and things like that are all possible. So, I don’t know. It’s going to be exciting for sure.”

Ragan vows to prove that underdogs can win again

Talladega frights: Never underestimate this place, on and off the track