Penske has two of its three drivers eliminated from the playoffs 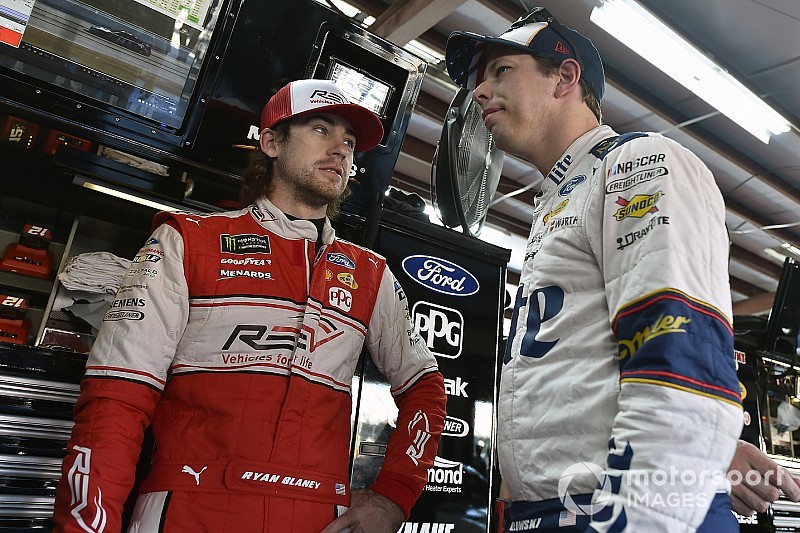 Team Penske is left with only Joey Logano in the 2018 title hunt as Brad Keselowski and Ryan Blaney were eliminated at Kansas Speedway.

But it was not from lack of effort. Both Blaney and Keselowski led laps, but it wasn't enough to save their title hopes.

Blaney ran up front for the majority of the race and narrowly missed out on the Stage 1 win. Although it looked like the 24-year-old was going to need a win to advance, a pit road penalty for Kurt Busch opened up an opportunity to advance on points.

He continued to run inside the top-three, trailing Harvick from second after the final restart with just over 100 laps to go. But through that run, Busch made up ground while Blaney lost it. After falling to third, he was still within striking distance of the leaders until he scrubbed the wall not once, but twice. That allowed both Kyle Busch and Kyle Larson to move by while Blaney fell down to seventh, where he would finish.

"Obviously it was a mistake I made trying to work hard to catch those guys and I pushed too hard and got in the fence," he said after the race. "It is all my fault. Whether it would have worked out for us or not, I don't know. I don't think we had the speed the 9 (Chase Elliott) or 4 (Kevin Harvick) had. The 9 was super fast. I don't know. I messed up and cost us a shot. I want to thank Wrangler and Menards and Ford for doing what they do. The whole 12 team deserves better than that.

"That was unfortunate on my part.”

Blaney missed the cut by just six points while Kurt Busch went on to join his other three Stewart-Haas Racing teammates in the Round of 8.

Keselowski's chances of advancement were much clearer -- he needed to go for the win. Crew chief Paul Wolfe employed an aggressive strategy where Keselowski would stretch the runs further than any other driver, but the cautions the No. 2 needed never came to fruition. He would finish just ahead of Blaney in sixth and he too was eliminated by 18 points.

“I would say about the end of that first stage it was pretty obvious that we needed something after I saw some things on the other cars," he said after the race. "We needed something to step up but it just wasn’t there. We just weren’t as good today as we were yesterday and I am not sure why. Everyone else seemed to find a little from practice and we were about the same, maybe a little worse than we were in practice.

"I am proud of what we did down the stretch of the year. We won three races and did all that. I feel like we can go win Martinsville next week so I am excited about that but of course the ultimate goal is to win a championship and we won’t have an opportunity to do that this year.”

They, along with Kyle Larson and Alex Bowman ended up in the drop zone as the playoff field is cut down to eight drivers. Their elimination leaves Team Penske with just one car remaining in the title hunt -- the No. 22 of Joey Logano, who is searching for his first championship this year.