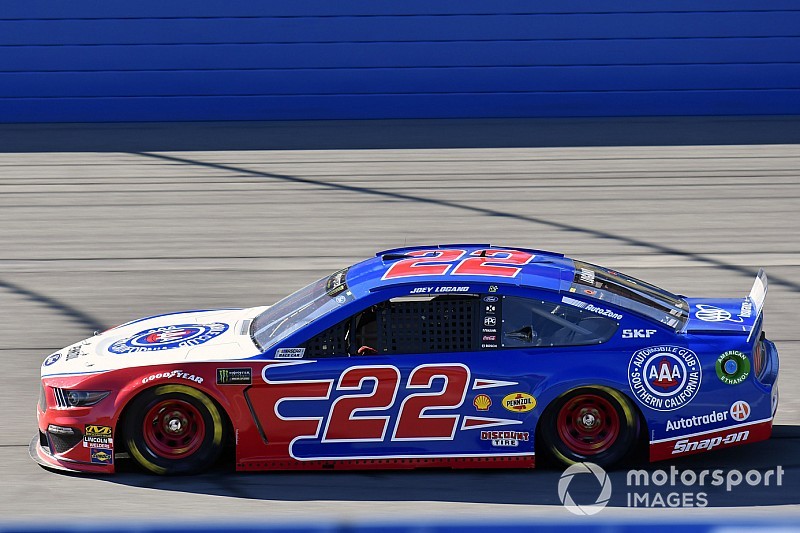 Team Penske is off to a strong start in the Monster Energy NASCAR Cup Series this season but it could do little to slow down Kyle Busch’s quest on Sunday.

While Penske teammates Brad Keselowski and Joey Logano have both won races this season and all three drivers, including Ryan Blaney, have shown plenty of speed, they had little to stop Busch’s march to NASCAR win No. 200.

Keselowski and Logano combined to lead 45 of the 200 laps and Logano moved out front on Lap 174 but Busch quickly ran him down and led the rest of way to win Sunday’s Auto Club 400.

“We only raced for two laps before (Busch) blew our doors off and drove away from us,” Logano said after the race. “Fastest car in the race. We got a little bit of work to do.

“We came so close. Proud of the effort. Hung in there all day, hung strong. Just didn’t have enough for the green car (Busch’s No. 18 Toyota).”

During pit stops between Stages 2 and 3, Busch was penalized for speeding on pit road and sent to the rear of the field.

It appeared the race would remain green and Busch may not make it back to the front, but a caution came out during the final round of green-flag pit stops and Busch had yet to make his stop.

He restarted second on Lap 170, briefly dropped to fourth, before powering his way past Keselowski and Logano to reclaim the lead for good.

“We were really good and got to the lead there on that last run but I just couldn’t quite keep it there,” Keselowski said. “It was a good effort by the team and we were right there in position and we gave it all we had.

“I gave all I had for (Busch) I got in front of him and tried my best to hold him off, we just fell off too much.”

Even Blaney led two laps in the race and picked up his second consecutive top-five finish of the season.

But even the combined efforts of a talented Penske team could do little to slow Busch down on Sunday.

“We were so strong in practice,” Keselowski said. “The track changing kind of threw us for a loop with the wind. Just never could get right off of Turn 2.

“It ended up kind of costing us the race there with (Logano). I couldn’t stay in front.”

Kurt Busch continues to show the way for Chevrolet