Goodyear's search for the proper tire is "a work in progress" on the Generation 6 car. 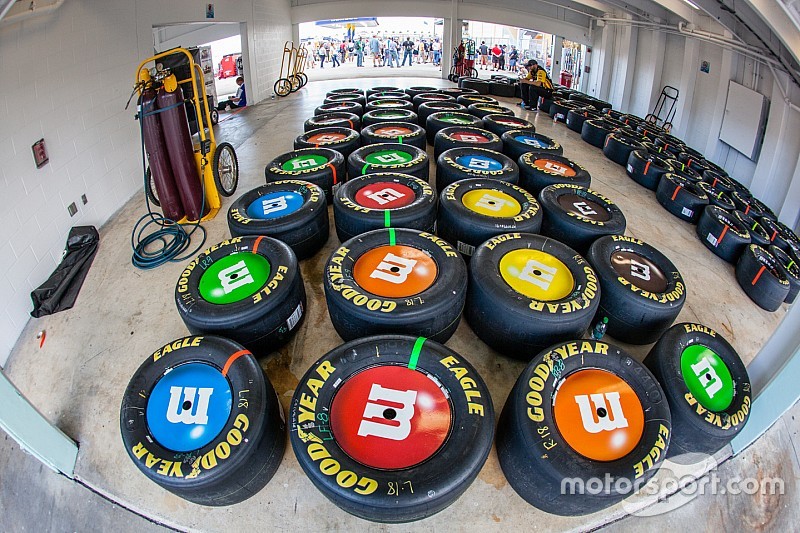 The discussion continues between NASCAR and Goodyear as to what type of tire compound best suits the Generation 6 Sprint Cup car.

While the tires were first in the news last weekend for the "Support Our Troops” branding as part of the Goodyear Gives Back program, the focus changed to the tire itself following the Coca-Cola 600.

Although many of the teams have acclimated to the right-side multi-zone tires at Charlotte Motor Speedway by reducing camber to increase the contact zone and achieve grip, others are still searching for the right feel. Listening to Sunday’s radio chatter and the consequent conversation on Twitter, it was clear that the current combination was a struggle for many of the competitors.

“About an inch of stagger and we’ll be rolling around pretty nice,” three-time Cup champion told his crew. “That’s about the only thing that’s going to make this hard ass piece of (crap) tire work.”

Kyle Busch referred to the tires as “awesome” and “spectacular” then added “for about eight laps…then it goes to (crap)”.

Kevin Harvick’s crew chief Rodney Childers tweeted, “Not a fan of having that dual compound tire on here. Hopefully that will go away before the fall and make the racing a lot better.”

Childers has since removed his tweet, Kyle Larson and Dale Earnhardt Jr. both responded to his comments.

Goodyear provided teams with the same left-side tires at the 1.5-mile track since 2012, the right-side tires were first run at Charlotte in the All-Star Race — as well as in the XFINITY Series race last Saturday. Teams first tested the tire in December with the new rules package for the Gen 6 cars. A confirmation test followed on March 10 performed by Martin Truex Jr., Aric Almirola, Kasey Kahne and J.J. Yeley.

Introduced in 2013, the multi-zone tread tire incorporates two different compounds — one as a safety measure, the other for traction. The inside two inches is a more durable compound designed to resist heat. The “endurance zone” compound was used at Texas earlier this season. The outside 10 inches of tire features a tread intended to provide more grip for the drivers, hence the “traction zone”.

Still, as NASCAR attempts to solve its aero issues with the 2015 car package — and develop another set of rules for 2016 — the onus has been but on Goodyear to provide a tire that will enhance the competition.

“We have had a lot of discussions with NASCAR over the last couple of weeks and have covered everything from hard tires to super soft tires,” Stu Grant, Goodyear’s general manager of global race tires told Motorsport.com. “There is no clear direction at the moment. I would say it is a work in progress to figure out what the future rule package would be. Everything has been mentioned at one point over the last two weeks.

“We’re fine as long as it’s in the discussion stages but when it comes down to determining a strategy and a direction for a rules package and you start manufacturing tires and generating data, that’s the long-lead time item. You can talk all you want to about soft, hard, whatever tire but what we need to do is get some consensus on where we want to go and then say, alright Goodyear, this is where we want to go. But we need to get it finalized.”

As for the Charlotte tire combination, Goodyear holds a teleconference with teams mid-week following each race to gather feedback and ascertain what can be done, if necessary, to improve performance. Once the data is reviewed Goodyear decides whether to stay the course, re-test the same tire or select a new tire for the event.

Many of the drivers have complained that the current tires compounds are too hard and do not produce adequate fall off, particularly at tracks that have been recently repaved. The other side of that argument is that Goodyear has not experienced the rash of tire failures that occurred in past seasons. Without the degradation, teams are exceeding normal fuel runs which eliminates time in the pit but also removes the possibility of error by the crews. Goodyear representatives told Motorsport.com that a softer compound has been used in nearly half of this year's events.

“I wouldn't say the tires are rock hard,” Grant added. “What has happened is we’ve softened the tire up at a number of races to try to get more grip at the race tracks that we can. We’ve really worked in ’15 with less horsepower and with slightly lower downforce to make a softer tire where we can.”