NASCAR's 2016 rules package a step in the right direction 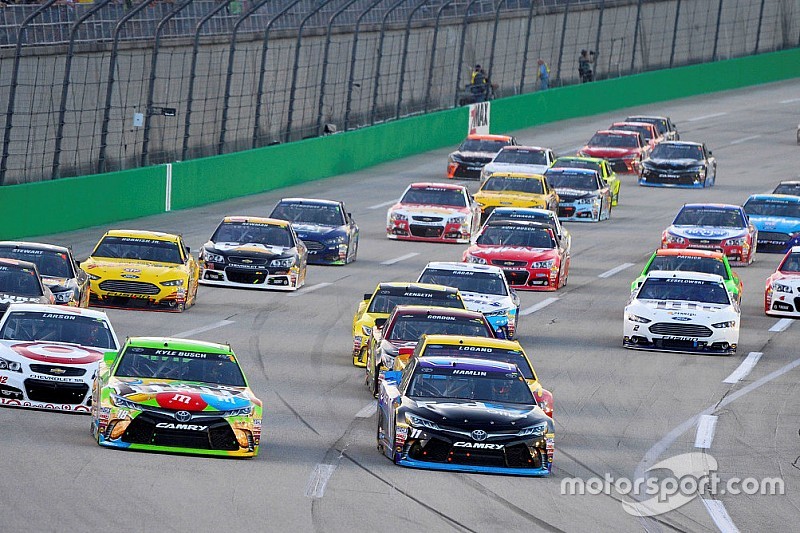 After a less than scintillating race at Charlotte Motor Speedway on Sunday, the announcement of the 2016 Sprint Cup rules package could not have come soon enough.

No, the new configuration won't show up during this year's Chase, but at least we'll have something to look forward to when next season rolls around.

With rave reviews following the debut of the low-downforce package at Kentucky Speedway in July and a repeat performance at Darlington Raceway last month, it’s clear the configuration was a hit among competitors and fans alike.

On Wednesday, the sanctioning body delivered the guidelines for next season to the teams. NASCAR’s Executive Vice President and Chief Racing Development Officer Steve O’Donnell told reporters that afternoon what the “base” aerodynamic package will be.

As was the case, Kentucky and Darlington, the rear spoiler is shortened from six inches to 3.5-inches with a quarter-inch leading splitter edge. Although the radiator pan was initially decreased from 38 inches-wide to 25-inches, it will be 33-inches on the 2016 base package.

Anytime NASCAR changes a rule there is a lot of design and development work to be done. This will result in an intense winter coming up

According to O’Donnell, the larger pan will help maintain the balance of the cars yet still account for nearly a 25-percent reduction in downforce.

“We're continuing to work with the industry on developing the appropriate elements of the rules for each track,” O’Donnell said. “By that I mean what are the tires that would match up or the gears, as an example.

“The core goal for us continues to remain the same, and that's deliver the best and safest racing possible for the fans. It's a goal that the entire industry shares, and it's a great thing in terms of working together.”

The superspeedway package for Daytona and Talladega “will remain very consistent”, according to O’Donnell. However, the engine package will now feature roller lifters. NASCAR implemented roller lifters in the Cup open engines prior to 2015.

According to Doug Yates, owner of Roush Yates Engines, the process has already begun.

“This is the last engine configuration currently raced that is not a roller lifter engine,” Yates told Motorsport.com. “Anticipating an increase in power due to the reduced friction of the roller lifters, NASCAR has also implemented a smaller restrictor plate size going from a 29/32” plate to a 57/64” plate. The smaller plate size will be a reduction in peak power of approximately 15 horsepower.

“The design and development process for this conversion has begun at Roush Yates. We have started by using our analytical tools to design a new cam profile for this configuration, followed by valve train dynamic testing which will ensure proper valve control to avoid any premature failures. From here, we will carry out engine dynamometer performance testing, followed by multiple durability tests to ensure race distance reliability.”

With 12 wins at Daytona — including this year’s Great American Race — Yates wants to come out of the gate running.

“Anytime NASCAR changes a rule there is a lot of design and development work to be done,” Yates added. “This will result in an intense winter coming up at Roush Yates Engines, preparing to defend the 2015 Daytona 500 win with Team Penske and Joey Logano.”

Where the rubber meets the road

Following the choice of the low downforce package, Goodyear’s director of racing tires Greg Stucker says, “The debate that we all need to agree on is which direction we’re going to go.”

In the two races where NASCAR used the low downforce package this season, Stucker described Kentucky as a more conventional tire, similar to other compounds run this season. For Darlington, Goodyear had the opportunity to custom-tailor a tire for the new configuration. Consequently, the tires had more grip.

“That’s what we did at Kansas. Atlanta and Homestead are looking ahead to that kind of package, saying, ’What can we do from the car perspective?’ Try to match the grip levels to similar levels we had at Darlington. Whatever aero was taken away, we’ll try to add that much of mechanical grip back.”

While testing tires with this year’s racing package, Goodyear has used the opportunities to get a head start on 2016 as well. Martin Truex Jr. said most of the testing he participated in for Kansas Speedway last month was with the low downforce package for next year.

“The lower downforce was good, it felt good, but Goodyear has a big challenge on their hands with the low downforce at the faster tracks,” Truex said. “The options they had for the direction we all want to go — softer with more tire wear — was too extreme. Twenty, 25 laps, they were gone on the right front. [Made me] nervous.

“They really had just one tire — the conservative tire that they brought. And that was pretty good. But they’ll have to keep working on that. Aside from that, it was good. The car was fun to drive. It slid around a lot. In the first three hours of the test, the groove was in the middle of the race track. It was great. Track was black. Took a lot of rubber. It’s going to be fun. It’s going to be a fun season.”