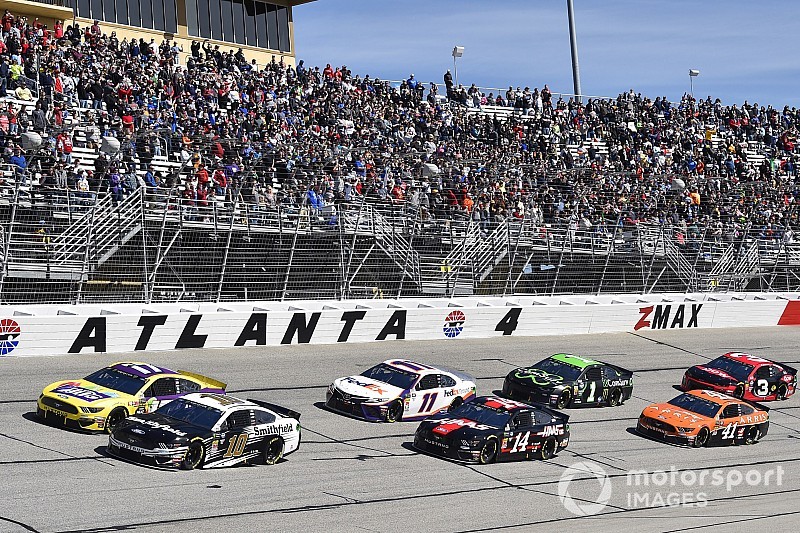 Welcome to the latest edition of the NASCAR Mailbag where we answer questions submitted to us by you the fans.

1. I am trying to  get an answer to my question regarding qualifying in the Cup Series. I am a long-time fan but after watching the Duel races at Daytona and the qualifying fiasco at Fontana I would like an answer. I think a complete revamping of  the current "timed" qualifying should be considered. Set up three 10 to 12 car heat  races with a mandatory pit stop in each one. Top 5 in each will  go to pole and and first 15 starting position 20 or 25 lap race. Pole race will also have a mandatory pit  stop. I can guarantee that  a lot  more tickets  will be  sold  if fans  can  come watch these  qualifying races. Even the three tier system like there is now is much better than the old single car qualifying I think it could be so much more exciting  and would pack  those stands  again. What do you think of this idea? Thanks for your  reply - Phil Bakken

Heat races were used for Dash4Cash races in the Xfinity Series but turned out to be far less entertaining than people hoped. Mostly it's because these days there are generally only a couple cars entered more than the field maximum. When all or most people already know they will make the race there is far less incentive for competition in Heat races. However, NASCAR's Steve O'Donnell did float the idea of using all-star race qualifying for every race. All-Star Race qualifying consists of 3 laps on the track and a mandatory pit stop with no pit road speed limit. That would likely come closest to the ideas you are talking about. - Jim Utter

JP, we'll get to see at least two components of the 2021 rules package in this year's All-Star race. You can read more about that HERE.  As for seeing the new prototype car in testing for public viewing, I think that will not happen at least until sometime in 2020. NASCAR and the OEM's might decide to wait and unveil the car to the general public after the 2020 season. - Tim Southers

3.Why did NASCAR mandate a "spec" engine in the Truck Series? Was it because Toyota was winning too many races? NASCAR has come a long way since it was known as "The Professional Wrestling of Motorsports." Witness the decline of once-dominant Hendrick Motorsports and the ascent of competing teams, now that Monster Energy Series rules enforcement is quantifiable and consistent. Still, this change to the Truck Series rules has the smell of insider politics all over it. - Robert

Robert, thanks for your question. While I understand your thinking, I can assure you that the biggest reason for the spec engine is to help control costs in the series. I used to work at NASCAR and was there when this was being discussed. While NASCAR certainly wants parity among its manufacturers and works to ensure a level playing field, costs was the biggest reason to bring the spec engine into the series. - Tim Southers
4. Any chance SHR brings the same Cup Series driver lineup for the 2020 season, or do you expect at least one change? Will Aric Almirola and Daniel Suarez return to SHR next season? I know Harvick and Bowyer are in a contract year, so they might potentially switch teams.  Thanks, Zach
Zach, as for Daniel Suarez, the team didn't indicate how long his contract was upon signing him. Aric Almirola is locked down in a multi-year deal.
7. It's been years since the last time a leader of a race was on a lap of his own. But if a car say two laps ahead of second place and blows up would the second place car have to complete two more laps before the lap counter registered the current lap? - Craig
You are correct. If a race leader with a 2-lap advantage were to blow up, either the lap counter would stop until the second place car reached that lap OR the lap counter could simply revert back to the lap number on which the second place car was running. In either case, those two laps would have to be run by the second place car to return to the point where the leader left the race. - Jim Utter

8. Hi, my name is Terry. I'm 56 years old and have been a race fan all my life, and a California local race car driver dirt track. My wife and I watch the Nascar race series all the time, very fun. My question is why don't they show the leader board running standings banner on the screen during the race? Watching the race on TV is a lot less enjoyable without it. Thank you for your time. - Terry
If you are referring to the series standings order (the race order is typically always shown), it is likely not shown nearly as often early in the season because the season standings really have little meaning, other than for the drivers who already have wins and are locked in the playoffs. The closer the season gets to the 26th race, the more likely some drivers will make the playoffs based solely on points, which in turn means the standings will be shown more because they have far more relevance.  - Jim Utter
Next article

Get to know the eNASCAR Heat Pro League JTG drivers

Chase Elliott: How teamwork “changed the game” at superspeedways