NASCAR "future-proofing" its Next Gen car to enable hybrid

Ford Motorsports global director Mark Rushbrook is excited about the evolution of NASCAR’s Next Gen race car and its ability to add a hybrid component in the future.

NASCAR recently announced it had completed its on-track development testing of the new Next Gen car and the manufacturer-specific designs from Ford, Chevrolet and Toyota have all been approved.

The new car was originally set to debut in the Cup Series this season but the COVID-19 pandemic delayed its on-track arrival until next season.

In all the testing thus far, the test cars had a manufacturer-generic overall design, but did include several prominent features that make them stand out from the current Cup Series models. They include far more stock-looking wheels and wheel well, body side molding and character lines, hood design and air exhaust vents built into the rear bumper.

While the cars will not have a new engine in 2022, Rushbrook said the cars have been designed to have the ability to change powertrains in the future.

“We are excited about what is in the NextGen car in terms of architecture of the car and improving the relevancy with the independent rear end suspension and the steering system,” he said. “We are future-proofing the car to enable hybrid in the future as well. We think that is important as our road car cycles changes to be able to race hybrid in this car as well.

“What is most important for us is being able to learn about hybrid technology in the motorsports environment and we can do that with the NextGen chassis and the current internal combustion engine we are racing today.” 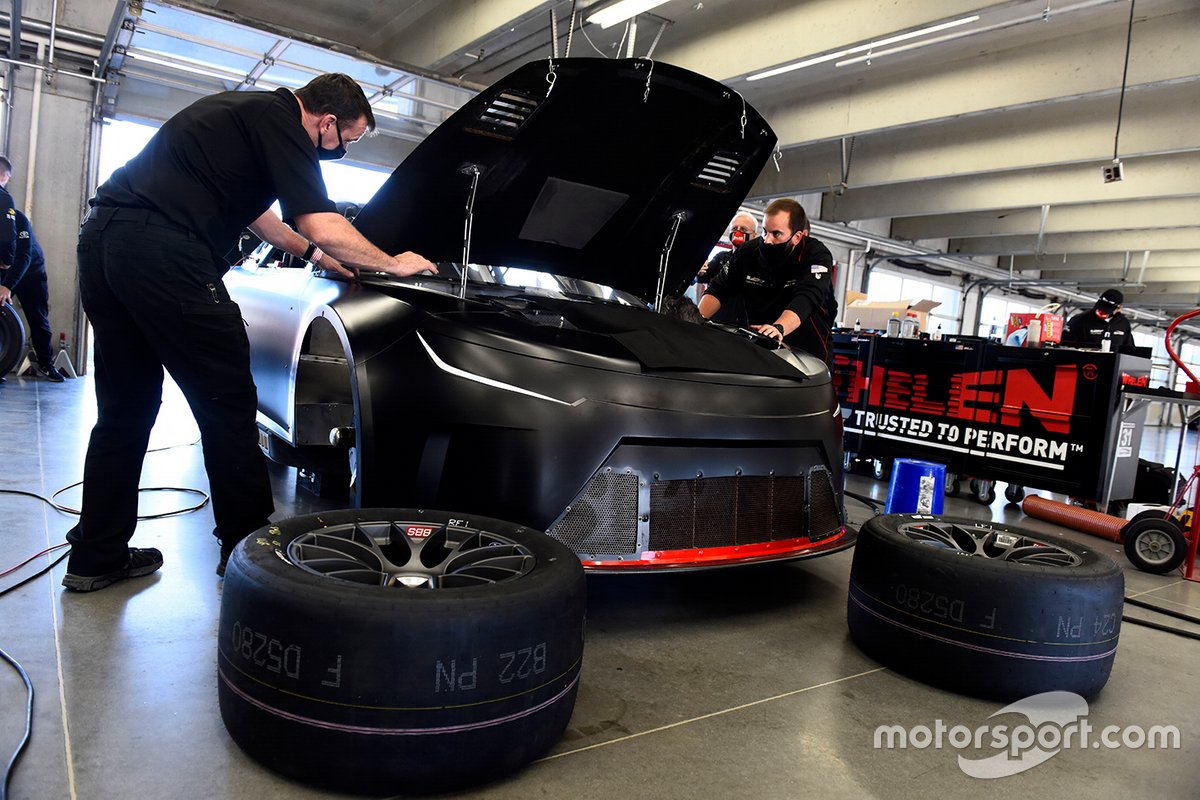 Team members make adjustments to the Nascar Next Gen car

NASCAR President Steve Phelps has maintained from the beginning of the Next Gen car project that engine development would require a hybrid component.

“I do think for a new engine, that engine will have some type of electrification, some hybrid that will be part of it,” he said. “I know for a fact we will not have a new OEM unless we change our engine.”

Rushbrook said all parts of the Next Gen car development have been focused on making the cars more akin to what customers see in showrooms and on the road.

“Internal Combustion Engines are still important to us today because we continue to sell the far majority of our vehicles today as combustion engines but we have a lot of hybrids that are on the road today and more and more hybrids coming.

“Hybrid is very relevant and we are still very interested in seeing that coming into the sport very quickly as well as full electric as we are shipping today our Mustang Mach-E’s to our customers.

The remaining testing of the Next Gen car this year will focus on three areas – Wheel Force Transducer (WFT) testing of all three car makes, Goodyear tire tests with the car, and much later in the season there will be organizational tests involving all the teams.

After hybrid technology, could the next logical step in race car design be electrification?

“We won’t be racing full electric anytime soon in the Daytona 500,” he said, “but at some point we think it is good for the sport to consider the option of when it does make sense to bring that in.”