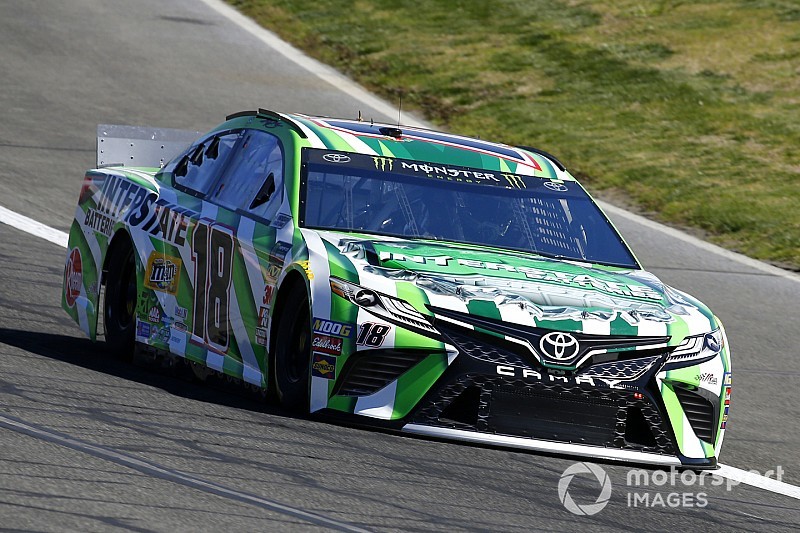 Kyle Busch took a big step toward his 200th NASCAR victory with his Stage 1 win at Auto Club Speedway on Sunday.

Busch went from fourth to first on a one-lap restart before a caution was displayed for a multi-car wreck that erupted behind him.

Austin Dillon started on the pole but Hamlin went three-wide to lead Lap 1. Over the next three laps, first Dillon and then Almirola made their way to the front.

Ten laps into the stage, Almirola held a small advantage over Hamlin with Kyle Busch running in third.

One lap later, Hamlin got around Almirola to re-take the lead. On Lap 12, Kyle Busch moved into the runner-up position.

By the next lap, Kyle Busch got a draft to get around Hamlin to take the lead for the first time in the race.

With 40 laps to go in the first stage, Kyle Busch moved out to a nearly 2-second lead over Hamlin. Almirola was third and Austin Dillon fourth.

On Lap 26, Ryan Blaney was the first to make a green-flag pit stop, hoping to get his handling corrected for the remainder of the stage. He was followed quickly by Harvick and Keselowski.

Kyle Busch made his stop from the lead on Lap 30.

Once the cycle of green-flag stops was completed on Lap 36, Busch was back out in the lead, followed by Hamlin and Almirola.

After the stops, Clint Bowyer continued to complain about a smell in his No. 14 Ford and was worried his engine might not last much longer.

With 20 laps remaining in the first stage, Kyle Busch had built up more than a 3.5-second lead over Hamlin. They were followed by Almirola and Logano.

With 10 laps to go, Hamlin had gained some ground on Kyle Busch and Almirola remained about nine seconds behind the lead in third.

With four laps remaining in the stage, a caution was displayed when smoke poured from Austin Dillon’s No. 3 Chevrolet after he tagged the wall and developed a flat right-rear tire.

Many lead-lap cars elected to pit, but Hamlin elected not to pit and remained on the track and inherited the lead. On the restart with one lap to go in the stage, Hamlin was followed by Stenhouse and Bowyer.

Front Row Motorsports teammates Michael McDowell in the No. 34 Ford and Matt Tifft in the No. 36 Ford started the race from the rear of the field. McDowell failed pre-race inspection twice and Tifft changed engines.

McDowell also had his race engineer ejected from the track for the rest of the weekend and will serve a 15-minute practice hold next weekend at Martinsville, Va.

Saturday’s Xfinity Series race winner, Cole Custer, remained on standby in the No. 3 team’s pit in case he was needed to substitute for Austin Dillon, who was experiencing flu-like symptoms Sunday.