Kyle Busch is second no longer. 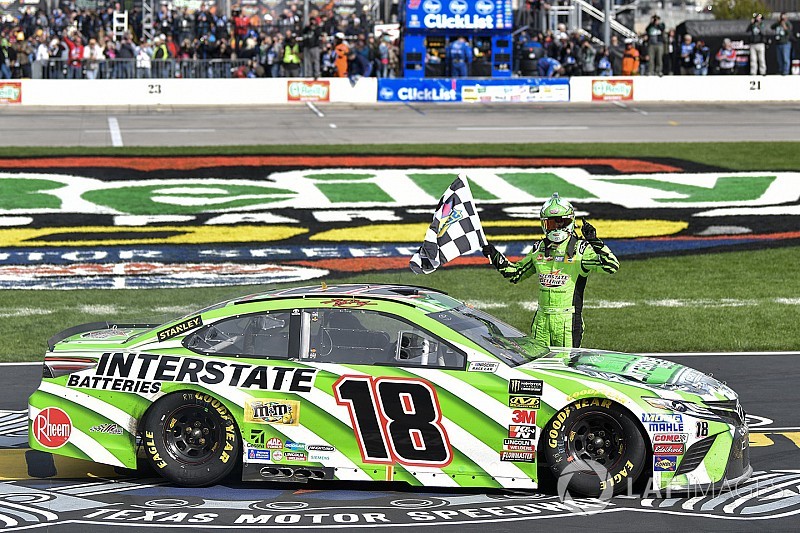 After finishing as runner-up in three of this season’s first six Monster Energy NASCAR Cup Series race, Busch closed the deal in Saturday’s O’Reilly 500 at Texas Motor Speedway, holding off a spirited charge from Kevin Harvick.

"It feels awesome," said Busch. "Any time you can win at a track that kind of isn’t maybe one of your favorites or isn’t one of your best, then it definitely means even more because it just – you try to focus on those tracks and make it a little bit more meaningful and a little bit more special to get it done," Busch said. "So cool though to be in Victory Lane here - finally this year and punch our ticket into the playoffs and of course, you know also just continue our hot streak of being the points leader right now and keeping these guys focused on what we need to do all year long.”

The win is the 44th of Busch’s career and third at Texas.

“Great job guys. Awesome, awesome job,” Busch said over his team radio as he took the checkered flag. “Thank you.”

During the break between Stages 2 and 3, Jones was first off pit road and took over the race lead when the final stage went green on Lap 178. Kyle Busch lined up second, Kurt Busch third, Chase Elliott fourth and Bowyer fifth.

Kyle Busch had a rough restart and quickly dropped back through the field which sent several cars scurrying out of the way. Denny Hamlin got into Aric Almirola, which ignited a multi-car wreck that eventually collected Jimmie Johnson, Brad Keselowski, Austin Dillon, Trevor Bayne and David Ragan.

“Just got loose under (Almirola). We were kind of getting squeezed there a little bit and there was just – running these speeds, you’ve got to have all the side force that you need,” Hamlin said.

“He was battling beside (Kyle Busch) I believe and you know we tried to go low and he was trying to fight for that real estate as well and we just got together.”

For Johnson, his career-worst winless streak extends to 30 races.

“Unfortunate circumstances, but a lot to build on from this weekend. A strong Friday, a fantastic Saturday and then not the best Sunday,” Johnson said. “We had a lot of different things work against us today, but we are getting closer each and every week.”

The race immediately went back under the caution flag and NASCAR quickly displayed the red flag to clear the track of debris. After just over 11 minutes, the race returned to yellow. It returned to green on Lap 184 with Jones in the lead.

On Lap 215, Elliott, running third, complained of a vibration and brought his No. 9 Chevrolet to pit road under green for a four-tire stop. He returned to the race in 14th and one lap down.

A round of green-flag pit stops began on Lap 321, including the leader Jones and Kurt Busch. The cycle was interrupted on Lap 236 when Paul Menard hit the Turn 2 wall to bring out a caution.

On the restart on Lap 241, Jones continued to lead followed by Kyle Busch, Kurt Busch, Bowyer and Logano. Harvick was back on the lead lap and lined up 13th.

Kyle Busch powered around Jones to reclaim the lead on the restart.

On Lap 250, caution was displayed following a spin by Trevor Bayne and Kasey Kahne, who had been racing for the free pass position. Several of the lead-lap cars elected to pit under the caution and on the restart on Lap 256, Kyle Busch continued to lead.

With 60 to go, Kyle Busch maintained a big lead over McMurray followed by Jones, Harvick and Logano.

With 55 laps remaining, Harvick had moved into the runner-up position and under three seconds behind Busch.

A final round of green-flag stops began on Lap 44 when Jones hit pit road. He was followed quickly by Busch and Harvick.

Before the cycle was completed, Ryan Newman – who had yet to make his final stop – blew a right-front tire and slammed into Turn 1 to bring out a caution. On the restart on Lap 312, Kyle Busch led the way followed by Harvick, Ricky Stenhouse Jr., Wallace and McMurray.

Busch said he had to work hard after the final round of green-flag stops to keep Harvick at bay. "It looked to me like he stayed pretty good right there the whole last run of the race. I kind of got out on him a little bit because he kind of slipped a couple laps and then he kind of closed back in on me, but once he closed back in on me, it just kind of seemed like it was the accordion of four to six lengths," he said. "That was about all there was and that was what it was in dirty air for everybody today. A fun time for us, you know being out front, being where it mattered and being able to go to Victory Lane and celebrate and throw some confetti and have a good night.”