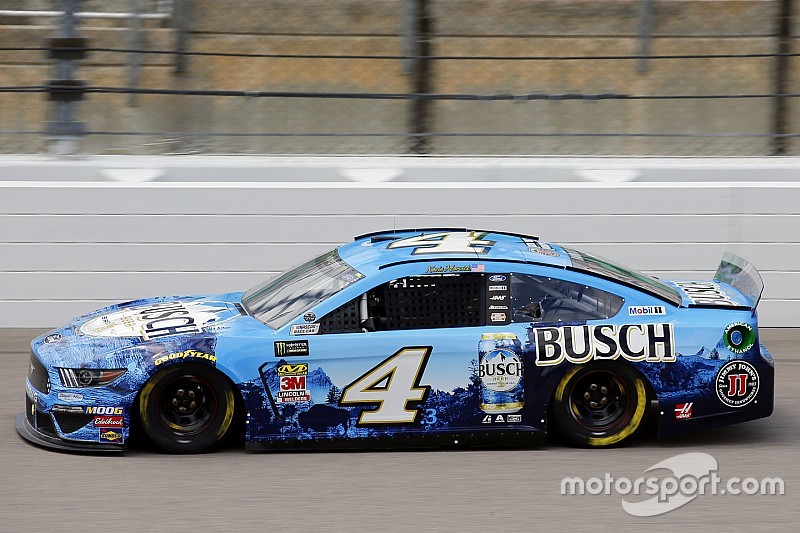 Kevin Harvick is off to a good start in his quest to pick up his first Monster Energy NASCAR Cup Series win of the 2019 season.

Harvick held off Chase Elliott to take the Stage 1 victory, his third stage win of the year.

Harvick, who started on the pole, held a slight lead over Bowyer after the first 10 laps. Logano, who had to start from the rear due to an inspection failure had already made his way into the top 15.

Just 20 laps into the race, Harvick had moved out to a more than 2-second lead over Bowyer with Keselowski in third. They were followed by Willliam Byron and Paul Menard.

On Lap 24 Byron made a power move on the bottom of Keselowski in Turn 3, passing him for the third spot. Two laps later, Byron passed Bowyer for second.

On Lap 31, NASCAR threw a competition caution to allow teams to check for tire wear after rubber was washed from the track due to overnight rain. All of the lead-lap cars elected to pit with Byron the first off pit road as several teams elected to take just two new tires.

On the restart on Lap 37, Byron was followed by Bowyer, Alex Bowman, Kurt Busch and Jones. Harvick lined up 10th, the first car with four new tires.

Bowyer powered into the lead just after the restart as Harvick gained six positions in one lap.

With 40 laps remaining in the first stage, Harvick had worked his way up to third as Kurt Busch took over the second spot.

On Lap 43, Harvick got around Busch and moved into the runner-up position.

Harvick retook the lead on Lap 49, showing four fresh tires provides plenty of grip to move through the field.

With 30 to go in the first stage, had moved out to an almost 1-second lead over Bowyer. Kurt Busch was in third, Bowman fourth and Elliott was fifth.

On Lap 55 Elliott had a moment coming out of Turn 4, nearly getting into teammate Bowman. Elliott completed the pass for the fourth spot.

A caution was displayed on Lap 60 after Denny Hamlin spun on the backstretch with an apparent flat tire.

Most of the lead-lap cars elected to pit with Harvick the first off pit road. Elliott remained on the track and inherited the lead. The race returned to green on Lap 66.

Byron was penalized during his stop for removing equipment and had to restart from the rear of the field.

Kyle Busch went three-wide after the start and powered to the lead for the first time in the race. Elliott quickly took the lead right back.

Harvick went to the inside of Elliott and reclaimed the lead with eight laps remaining in the first stage.

With five laps to go, Harvick had opened up a 1.7 second lead on Elliott with Stenhouse moving into the third position.

Inspection failures send 11 Cup cars to the rear at Kansas

Chase Elliott runs down Harvick for Stage 2 win at Kansas