Did you realize DEI is no longer in Cup racing?

By:
Covy Moore
Listen to this article

Dale Earnhardt Incorporated (DEI) will no longer be associated with a race team in any of the national ranks of NASCAR.

Last week, news quietly came forward that Chip Ganassi had dropped the Earnhardt name from his race team's moniker. This season, they will revert back to the old name of Chip Ganassi Racing with Felix Sabates.

DEI was started in 1984, as Earnhardt wanted to field a handful of Busch, now Nationwide, cars for himself. As his success grew with Richard Childress Racing, his own brand grew as well.

Following the 2001 death of Dale Earnhardt at the Daytona 500, his widow Teresa Earnhardt and and son Dale Jr. continued to run the team with some success. 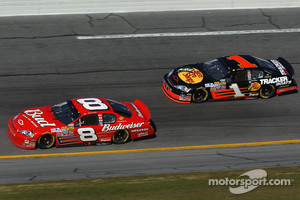 But in 2007, there was a power struggle that ended with the younger Earnhardt leaving the company and Teresa looking for financial backers.

She partnered the company with a real estate agent before merging with Chip Ganassi in 2009.

In the end, it would only last 5 years as the name has now been dropped from the CGR logos.

What happened exactly? There was very little in the way of news surrounding the development. Reports claim that Teresa never actually had any financial assets within the company, and that she was never a part of day-to-day operations.

"It's been an honor to have the Earnhardt name affiliated with our team," Chip Ganassi Racing President Steve Lauletta told the Sporting News Jan. 9.

"Dale and Teresa have done a tremendous amount for the sport. She was visionary enough with us to do this partnership in the first place. We felt like it was a benefit. ... The goal of becoming a better race team partnered together, we think we did that. That's a tribute to her wanting to do the right thing for her partners, her company and her employees. We have nothing but good things to say about the partnership."

I suppose the most interesting part of this is what has DEI actually been doing then for the past 5 years? I would assume the first couple years of the partnership saw some monetary exchange, but if that isn’t happening anymore, where is the Earnhardt legacy going in the hands of Teresa Earnhardt?

Either way, the only Earnhardt on track now will be Dale Jr. at Hendrick Motorsports. Jeffrey Earnhardt has made some noise as he makes his way up the ranks, but gone are the days of the iconic E-legacy cars. There's always the return of the No. 3 car this year, but that a whole different discussion...

A new partnership for Swan Racing