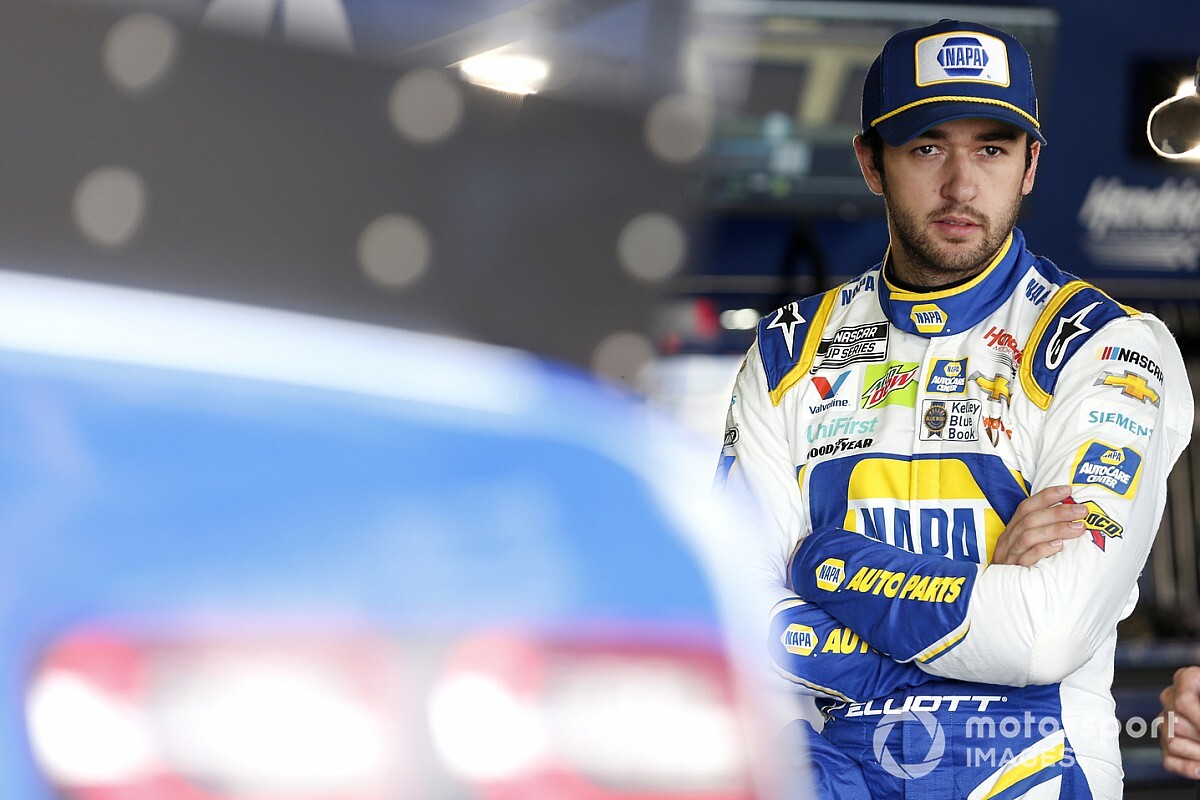 Elliott had just passed Busch for second place as they raced towards the finish, but as he attempted to move back in line Busch clipped the tail of Elliott’s car, sending him spinning into the pit wall and out of the race.

After the incident, Elliott got out of his car and flipped his middle finger at Busch on the following lap under yellow. Busch’s Joe Gibbs Racing teammate Denny Hamlin went on to win the rain-shortened event, with Busch finishing second.

Hamlin and Elliott had their own spat towards the end of the 2017 season, as Hamlin wrecked Elliott at Martinsville before Elliott repaid the favor during the playoffs at Phoenix, bumping him hard enough to cut a tire and causing Hamlin to wreck later.

“We’re talking about this more, right, because he’s popular,” Hamlin told Motorsport on NBC about Wednesday’s incident. “Everyone is cut-throat on the space right now, even Chase. He cut us off at least twice and got us some nose damage in these last two events. I don’t fault him, because everyone is fighting for every inch or two of space.

“Kyle explained it exactly as it happened. If he didn’t get in the hole behind the #9 and [in front of] the #4 he would get freight-trained. It’s almost like superspeedway racing. He thought the #9 had a faster run going. He’s looking in his mirror and turned right. It happens in our sport more than you’d notice – and guys are [often] pissed off with each other. It’s just the two people involved here are pretty popular.”

When asked if he expected Elliott to search for retribution on the track against Busch, Hamlin said: “If Chase were to retaliate, you’d know it was intentional, right? What Kyle did was unintentional. Is the score really even if one was intentional and one is not? Probably not. The result might be equal, but it’s not when it comes to intention.

“If Chase doesn’t retaliate, the drivers won’t think any less of him. We don’t expect Chase to go out there and do anything to him, and if he does, that would raise your eyebrows more than what Kyle did. I don’t think Chase needs to fight for relevance. We all know he’s good and talented, he’s gonna win a ton of races.

“I don’t race him any differently. I race him tough, same as I did before I crashed him at Martinsville. That’s a sign of respect for me. But there are times you don’t race tough, you have to race smart and that’s what wins races.”

For his part, Elliott was asked about the collisions with both Gibbs drivers, and refuted any notion that it meant there was a rivalry building towards either of them.

“I don’t know that I would call them rivalries,” said Elliott during a media call on Friday. “I got crashed on both occasions, so at the end of the day, it’s just unfortunate for me.

“I don’t know if it does or not, that’s just kind of the way it’s worked out. Two moments that were in closing laps and battling for a win like that I think certainly adds to the spotlight, more so than the names [involved].”

When asked about the code of conduct between the drivers when it comes to admission of blame for an incident, Elliott said it depends on the individual involved whether it's accepted.

“I really think it depends on the person and how much respect you either had or didn’t have for that person prior to the moment,” said Elliott. “From Kyle’s situation, Kyle and I have gotten along for many years. I feel like I’ve raced him with a lot of respect because I respect him.

“I think he’s really good, and he is. A two-time champion should be respected, in my opinion. I think he’s earned that right.

“The respect from my end was there prior to the event, so to hear that from a champion and a guy that we’ve raced really hard and clean together over the years, I think goes further than someone who I don’t care for as much, or somebody I don’t get along with as well, or somebody that doesn’t race with that kind of respect or that kind of integrity on the track. I think it really depends on the person.”