Analysis: Why NASCAR’s Kentucky package had its haters 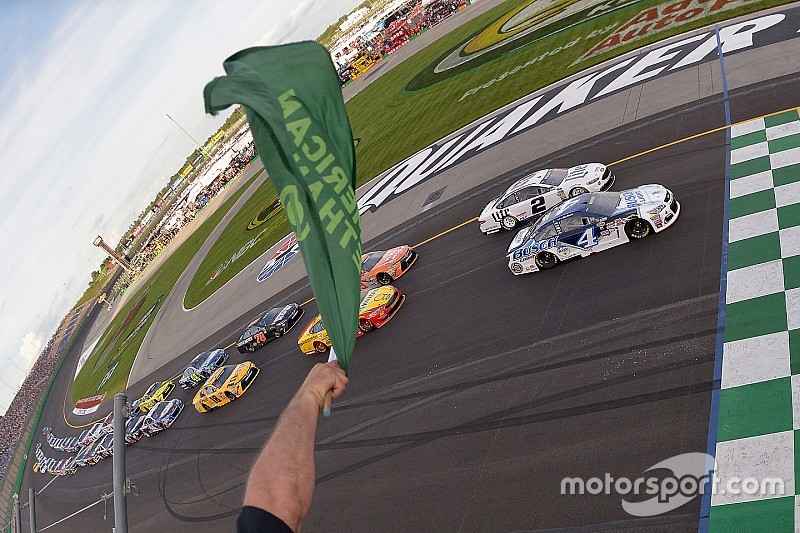 The low, low downforce package was met with mixed reviews at Kentucky Speedway on Saturday - but could we see it again before the Chase for the Sprint Cup begins?

NASCAR will meet with team representatives on Wednesday to review the latest experience with the proposed 2017 configuration for the Cup Series to determine what, if any, changes need to be made and if the sport needs to take another run with the car prior to next season.

While NASCAR has said repeatedly there will be no changes to the current 2016 rules package for the Chase, the possibility of running the lower downforce package at Michigan Speedway next month is not completely off the table.

Although competitors were pleased with the direction of the changes at Michigan Speedway last month, at Kentucky Speedway on Saturday night it was difficult to ascertain what issues were derived from the extreme lack of downforce on the cars along with an unknown tire and what was the newly repaved/reconfigured track.

“Well, it's a little bit more obviously difficult to make a concrete conclusion, considering all those things that you mentioned,” NASCAR senior vice president of competition Scott Miller said after the Quaker State 400.

“Certainly it's a little bit more gray than if it was at a place that we had had a lot of races and some consistent races over years on the surface.”

I believe they can make that right-side tire as hard as they want, go as safe as you want there so we don’t have the blistering, but soften the left up some.The racing will be better.

Keselowski: Package key to my success

Not surprisingly, race winner Brad Keselowski was pleased with the outcome. He credited the low downforce package with helping him win the race.

“Without the lower, lower downforce package today, I don’t think I would have won the race,” Keselowski said. “I would have never made the move I made on the 4 car (Kevin Harvick) and that would have been it.

“There were certainly moves you could make today that you couldn’t make before with respect to getting behind somebody and being able to alter the way that their car drove, and that’s a part of being a race car driver. That’s a part of this package.”

Predictably, some of Keselowski’s rivals weren’t nearly as satisfied. Kevin Harvick, who started on the pole and led a race-high 128 laps, described the racing as "hard – it was very hard to race.

“We had the track position. We were able to keep it, and that is really what kept us up front,” Harvick added.

The No. 4 Chevy was one of the front-runners who had to top off for fuel in the closing laps and recovered to finish ninth.

Clearly, the new package when combined with the changes to the track proved challenging for the field. It’s not often you see six-time Cup champion Jimmie Johnson wreck not once — as he did in practice — but again in the race, 32 laps in. Johnson returned to the track but only to nurse the ailing No. 48 Chevy around the track for the final 193 laps.

Joey Logano won with the same package at Michigan Speedway and with the lower skewed package in the All-Star Race. On Saturday, Logano lost control of his car on Lap 40 after starting fourth.

Over the next 15 laps, Logano burned up his brakes and blew his right-front tire. The driver of the No. 22 Ford described his crash as “one of the hardest hits I’ve had in a while.”

Earnhardt Jr not pleased at all

Dale Earnhardt Jr. survived the weekend but insisted the experience was “not fun." More than anything, Earnhardt wasn’t pleased with the tire selection for the event with the new surface.

“One groove, slick, slick, slick,” Earnhardt said. “Okay, so a new repave has a lot of grip. Goodyear brings a real conservative tire that is going to be extra careful on blistering. They had some blistering in the test that scared them, so they went really conservative on the tire.

“Personally, I believe they can make that right-side tire as hard as they want, go as safe as you want there so we don’t have the blistering, but soften the left up some. The racing will be better.”

Earnhardt acknowledged that the tire strategy was no different with previous repaves, with the left-side tires being harder and more durable. However, Earnhardt adds the lack of grip contributed to drivers being unable to turn the cars and pass the competition.

“You just slide that left-front all night long through the center and on exit,” Earnhardt said. “You can’t drive around and underneath guys. There is nothing you can do to get that left-front tire any grip except for soften the tire up. That wouldn’t be hard to do.

“It’s a conservative tire. I understand why they did it because of the blistering they had in the test. We can’t come here and blister and blow right-fronts and have guys pounding the fence at 190 mph.”

As for the low, low downforce package, Earnhardt wasn’t crazy about the combination of modifications to the car with the selected tire. While he agrees the competitors are advocating for less downforce, Earnhardt’s not sure Kentucky Speedway was the best venue to test the latest configuration of the car particularly when the tires last long beyond a fuel run.

“If you take me to Texas with the tire we have there and a worn out old race track and a softer tire or a tire that gets grip into the track would probably love this type of package,” Earnhardt said. “But, it’s just a bad combination for the new surface and how conservative that tire is. I mean you couldn’t hustle the car at all.

“You are just on pins and needles all the time on restarts like … ‘uhhh… I don’t want to lose any ground’ and ‘boy, if I have a big slip I’m going to lose all kinds of track position,’ which happened over and over to a bunch of guys, myself included. That sucks to race that way.

“You want to drive and hustle and try to get in there and beat guys. You can’t even run side-by-side. Guys who run side-by-side were a second slower. What the hell?  That is awful; we have a problem man that is no good.

“But the track will take some time to get better and we have all heard about what they did with the pavement and stuff to try to make it age quicker. We will see how it goes.”

“The low, low downforce package, if that's what we're calling it now, helped at this race on the repave,” Miller said. “I think the corner speeds would have been extremely high, and with the higher downforce stepping out of the groove might have even had more consequences than we had (Saturday night).

“I think I walked in when (Keselowski) said something: we're professional drivers, and it's not supposed to be easy. Certainly I think that the downforce package that we got, no matter where we're racing, is going to provide that.”