New MotoGP world champion Fabio Quartararo admits he “couldn’t ride” his Yamaha on his first test back in 2018 and questioned “what the hell am I doing on this bike?”.

The Yamaha rider won five times across 2021 with two rounds still remaining, and is the only rider to have scored points in every grand prix so far.

It is a stark turnaround from his wildly inconsistent 2020 campaign, when he won three times but made no other podium appearances and went from leading the standings to eighth across the final six races.

Quartararo's promotion to MotoGP in 2019 with Petronas SRT was heavily criticised as he'd only just won his first grand prix in Moto2 at Barcelona in 2018, but pretty quickly changed perceptions during 2019's pre-season tests.

However, Quartararo revealed he felt out of his depth when he first tested the SRT Yamaha at Valencia at the end of 2018 – ending that opening day 2.4 seconds off the pace.

"When I won the two Spanish Championships [in 2013 and 2014], of course the first step was to win a Moto3 world championship," Quartararo said following his coronation.

"But I didn't even make a victory. Then I moved to Moto2, I was trying to take confidence back.

"The first year that was not achieved, the second year yes, and we won two races… OK, one was taken away (he had his Japan win stripped for a technical infringement), but I know that we won two races. 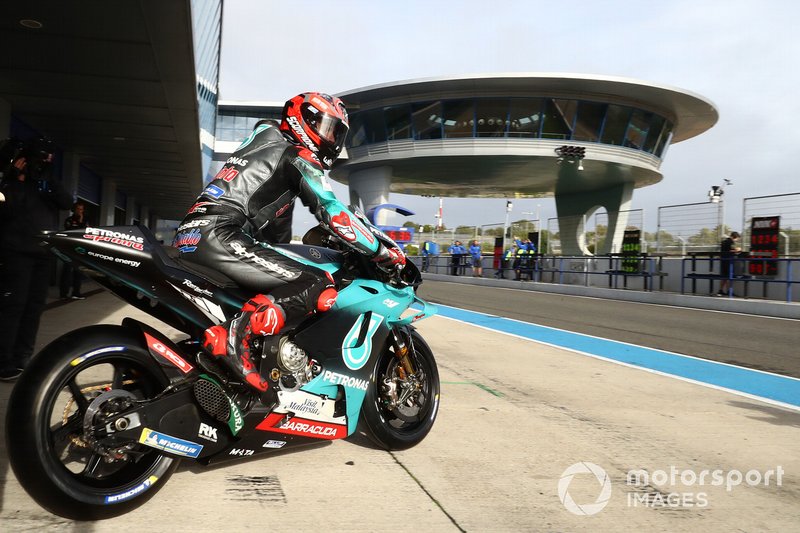 "But I didn't expect to move up to MotoGP, so Moto2 world championship was not possible to get.

"So, the only way to be world champion was in MotoGP. We achieved it and it's something that I never expected.

"I couldn't ride it, [there was] so much power. Right now, I ask for much more. The steps were slow, but good.

"First day I finished three seconds [behind], then two seconds, last day of Jerez we finished 0.8s [behind].

"Sepang was tough, then in Qatar we made a massive step and we finished P2 in the test and from that moment I knew I was well.

"2019 was good and of course it was a big dream to be world champion and we achieved it."