Marquez opens up on why comeback bid “became dangerous” 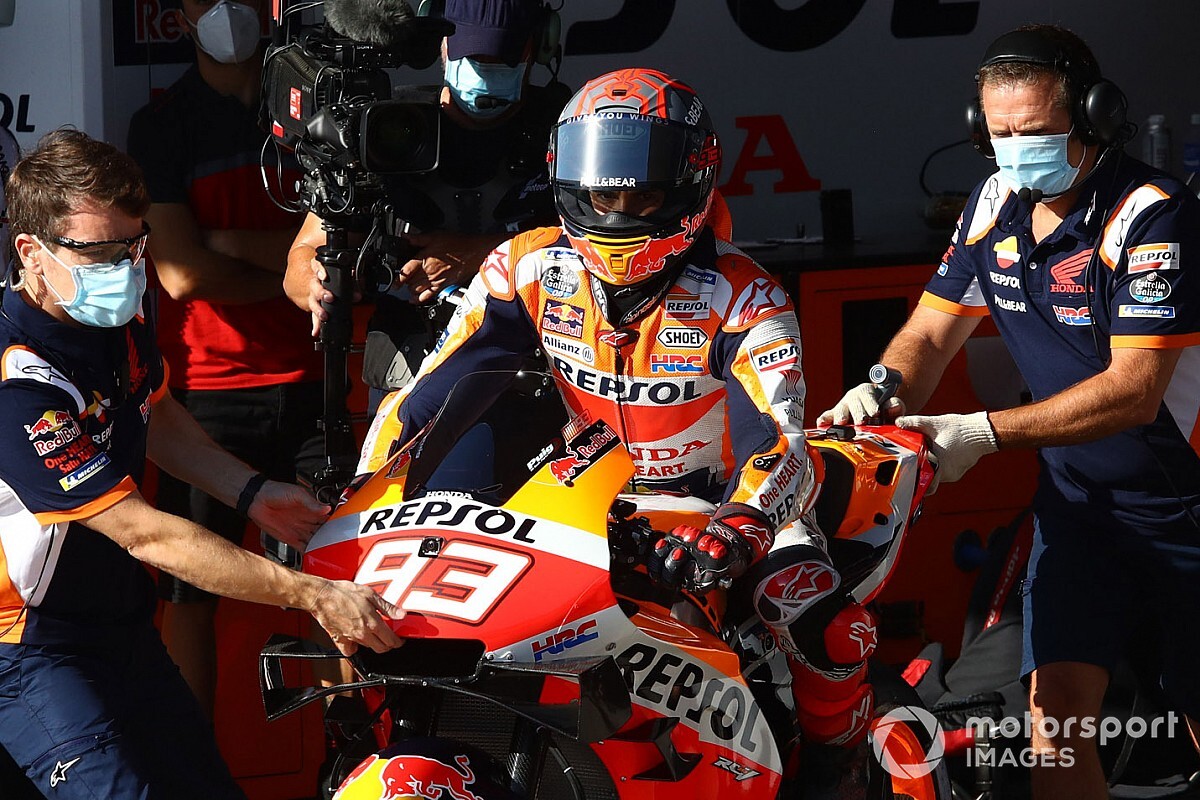 The Honda rider broke his right humerus in a heavy crash in last weekend’s Spanish GP at Jerez and underwent surgery on Tuesday.

Believing he could ride at the same track this weekend for the second round of 2020, Marquez returned to Jerez from Barcelona and passed the medical exam on Thursday – though sat out Friday as part of a compromise with Honda.

Riding in FP3 and FP4 on Saturday, Marquez managed a total of 28 laps across the sessions and was “surprised” at being able to lap in the 1m37s bracket.

However, in FP4 he noticed the strength in his elbow weaken, and the situation became “dangerous”, which led to him withdrawing from the weekend after just on lap in the first part of qualifying.

Commenting on his attempted return, Marquez said: “After surgery I saw there was a small possibility [to race], so I need to try and when you are a sportsman, when you have a passion for something you try. Today I will sleep well because I tried, it was not possible, but what I did was follow my body and my body said ‘you must try’.

“This was the plan, try on Saturday morning, check the level and check my condition on track. And honestly speaking, it was really good, was kind of surprised to ride in 1m37s to be able to ride in a good way.

“In the afternoon I started again, and in the first run [in FP4] I felt good and even the rhythm with the used tyre, I was kind of surprised. But for some reason, after I stopped in the box, I went out again and immediately [the strength went] down in the elbow, was like nerve or something that [meant] I lose the power immediately.

“This became dangerous. It is what I did all this week, follow my body and in that moment my body said ‘stop’. I stopped in the box, I told Honda I’ll try in QP1 and if I have the same feeling I will give up.”

Marquez explained that his crash last Sunday came as a result of him believing his “job is done” when he got behind the struggling Maverick Vinales in second last Sunday.

“[Fabio] Quartararo was, in a few laps, impossible [to catch], five seconds ahead. And I said ‘okay, job is done, I will just follow him [Vinales] and overtake him in the end’. And it’s there where I fly, I mean in that corner the only difference is that always every lap I was cutting the curve on the inside.

“That lap I didn’t cut the curve, just I touched the white line and then it suddenly both wheels went. Of course, it’s a mistake that I crash. But this is something that can happen in racing and you must learn from it.”