Espargaro: Miller and I wanted Styria MotoGP win “too hard” 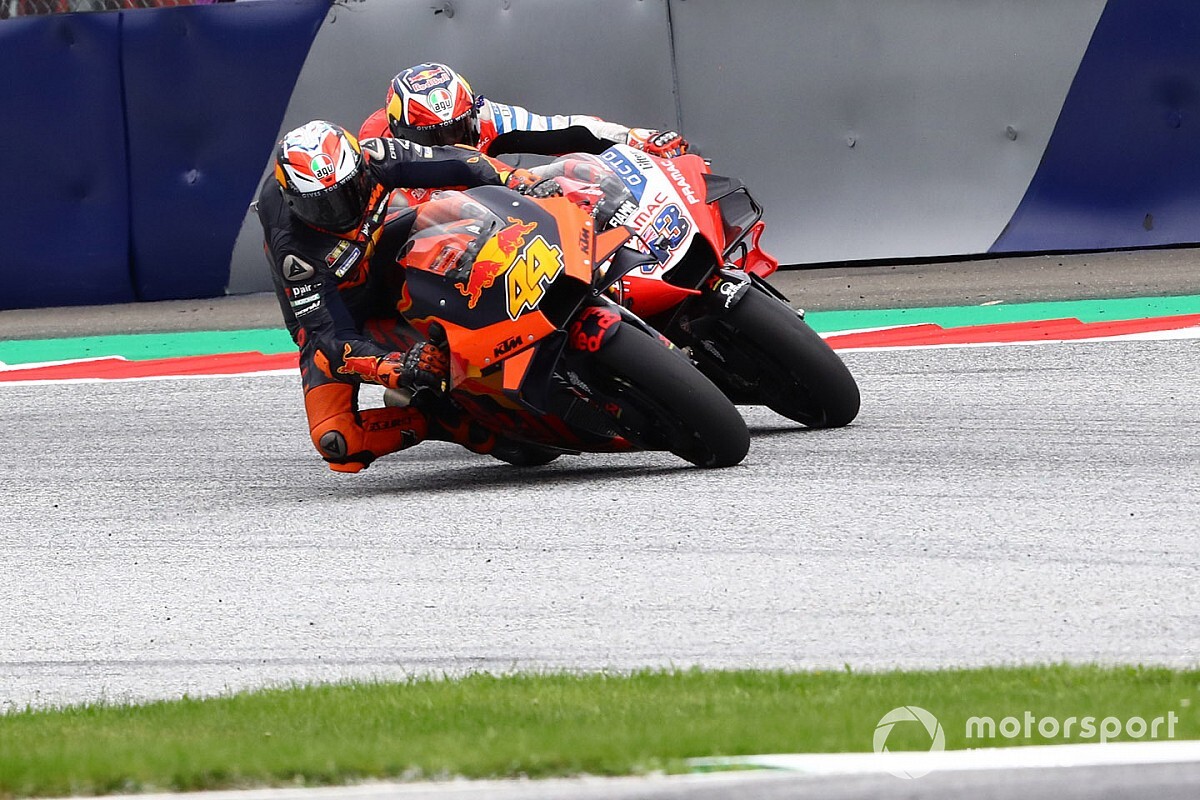 Pol Espargaro says he and Jack Miller wanted MotoGP Styrian Grand Prix victory “too hard” in their last-lap duel and “gave it” to Miguel Oliveira.

The KTM rider led from lap seven to the final tour, but an overly defensive line at Turn 3 allowed Pramac’s Miller to overtake him on the run into the corner.

Espargaro scythed up the inside of Miller at the penultimate corner, with the latter attempting a move up the inside into the last turn – though both ended up going wide and allowing Tech 3’s Oliveira to sneak through to claim a shock maiden win.

Commenting on his race, Espargaro says he was forced into defending hard on the last lap owing to the Ducati’s strength in braking and on acceleration.

“When I crossed the line, I saw on my pit board ‘plus zero’, so I didn’t know how much distance I had to Jack,” Espargaro said.

“I just needed to block the inside of that corner. Maybe I block a little bit too much, that’s true. But I needed to do it, especially with the Ducati, because they brake hard and they accelerate very hard.

“So, I needed to be very slow in the middle and then use the body to put the front down.

“But then it was a matter of who wanted to win harder. For sure too much because at the end we didn’t take the victory, we gave it to Miguel.

“But in the end what matters is that we had a nice fight, clean one till the last corner. We enjoyed it.”

Expanding on his last-corner battle with Miller, he added: “This corner is super tricky because it’s going down, so it’s not easy because it’s just going up and then a bit down in the last part.

“Normally the speed there is high and the risk of crashing is quite high as well. So, it’s also difficult when someone goes inside to try to win the position.

“When Jack went in so hard he blocked me so good and we both went out wide. I just tried to brake late going inside and he was there. I didn’t want contact and that’s why we both went wide.

“We wanted it too hard, but in the end we gave it to another one. But that’s racing.”

Espargaro ended up third to claim his first dry MotoGP podium, though was surprised at his “outstanding” pace in the 12-lap restarted race as he was struggling in fourth before the red flag and hadn’t changed anything on his bike during the pause.

“From the first race to the second, I don’t understand [why I was faster], because I was struggling so much,” he said.

“[I was] really pushing but nothing coming actually, I wasn’t turning so much, struggling so much.

“I was super-fast and comfortable. We need to check the data because I cannot give an answer as to why we were so different from the first to the second race.

“I’m really curious as well because it was the same bike and tyres.”