Valentino Rossi has reacted to the “disaster” post-race for his VR46 Moto2 and Moto3 riders in the Andalusian Grand Prix, which included an embarrassing collision and a podium injury.

In Moto3, Celestino Vietti carved his way to third to secure his first podium of the campaign.

However, the post-race celebrations for all three proved eventful with Vietti requiring stitches in his hand when he broke the bottle of Prosecco he was handed on the podium.

Then, on the cooldown lap after the Moto2 race, Marini and Bezzecchi collided between Turns 1 and 2 as they attempted to shake each other’s hand – though both were uninjured.

Check out our photo sequence below... 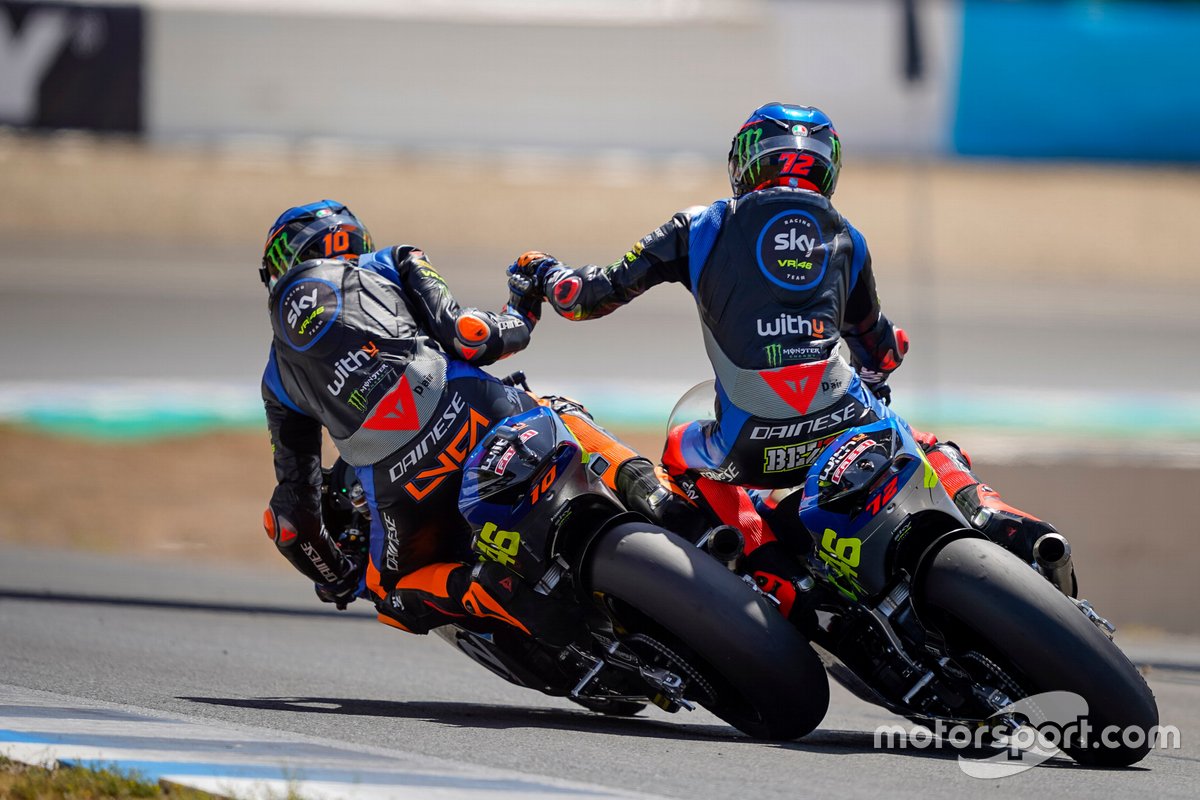 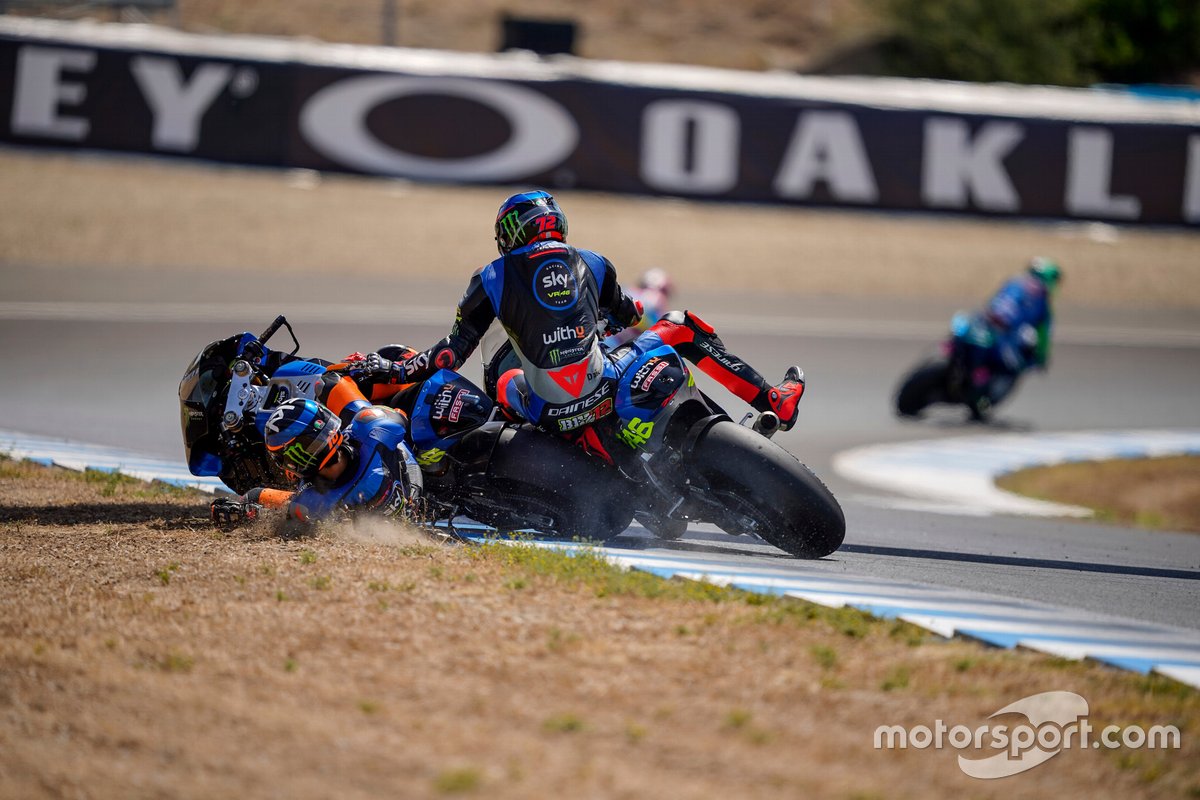 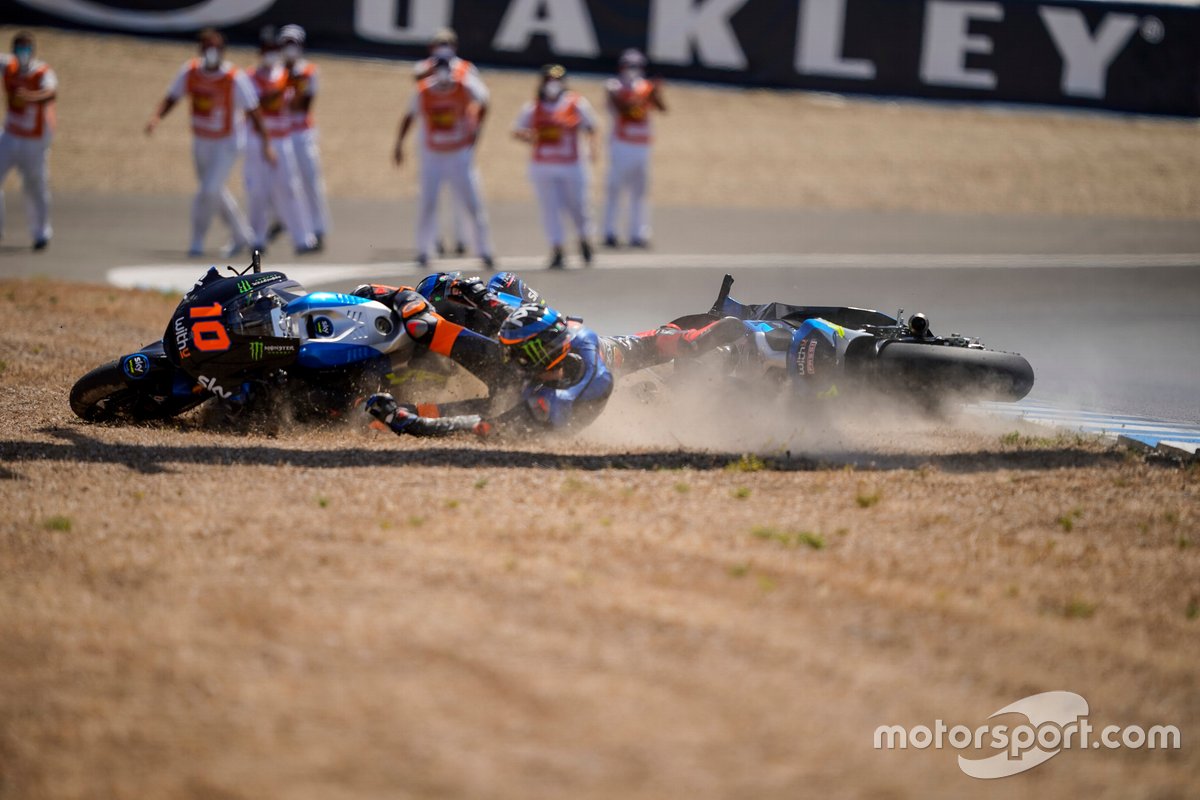 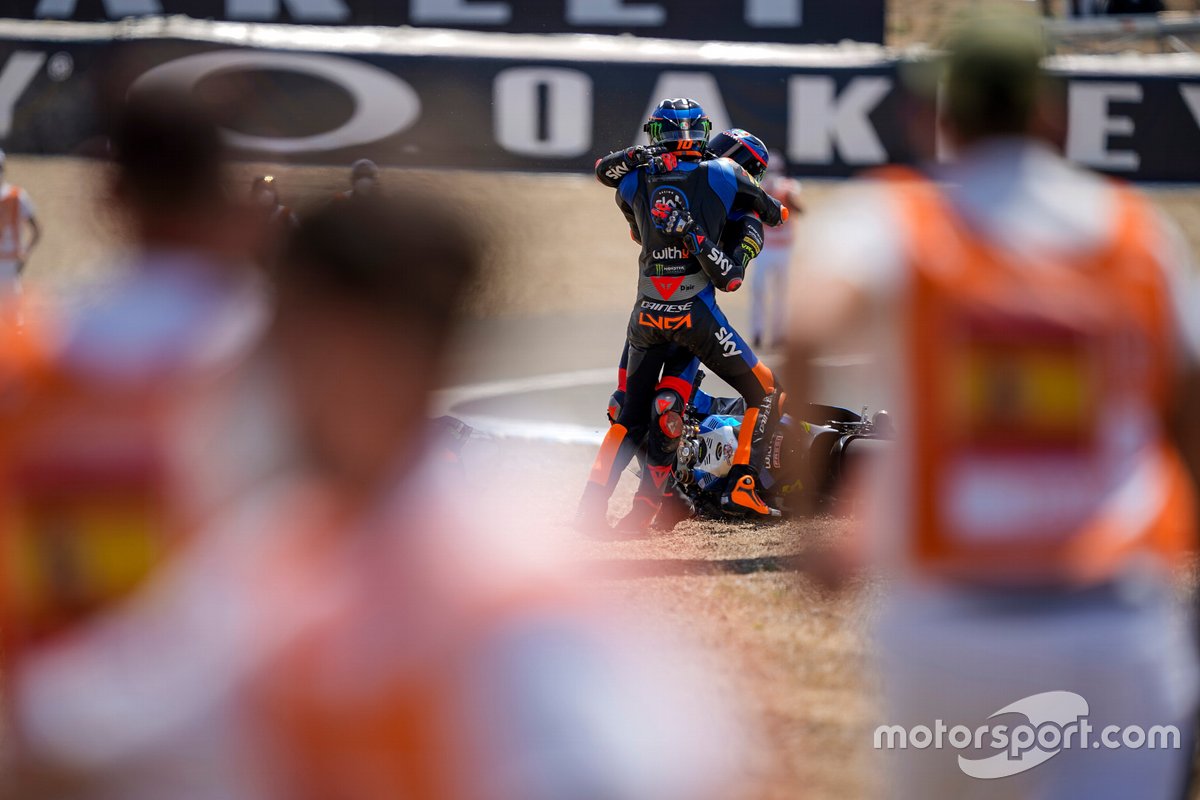 When asked about the incident in Moto2, Rossi said: “When I see my two bikes, the two bikes of my team, in the gravel after the [chequered] flag, I say, ‘this cannot be true’.

“I directly understood that to [shake] hands, they touched the handlebars together and they both crashed. And we were so worried because also Celestino had an injury on the podium because he broke the bottle and he had stitches in his hand.

“He make like this [gestures hitting bottle off the ground] the champagne for it to explode and broke the bottle, and he had a cut in the hand. [It needed] I don’t know, five or six stitches.

“It’s a disaster. After in parc ferme I say to my brother [Marini] and to Bez, ‘Keep attention on the podium now, don’t make another disaster, it’s enough’.” 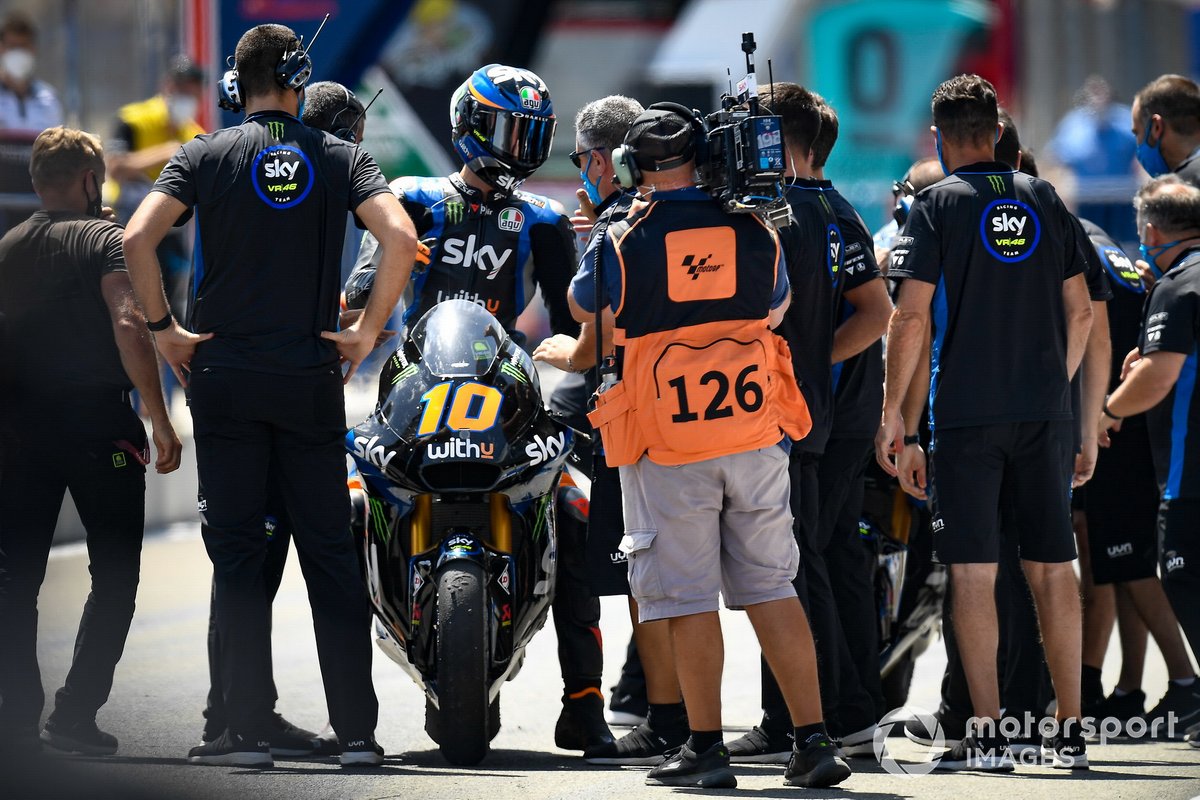 Pramac Ducati’s Francesco Bagnaia and Petronas Yamaha rider Franco Morbidelli almost ensured VR46 Academy riders would make the podium in all three races, before technical issues late on in the MotoGP contest took both of them out.

Rossi says he was “proud” of the VR46 Academy’s efforts over the Andalusia GP weekend, while also noting they helped up through his own “frustrating” times in MotoGP of late.

“I am very proud of my guys, of our riders from the Academy because we are very close, we have a great relationship,” he added.

“Together we did a very good job, we arrived at the beginning of the season ready and they help me a lot when I was frustrated from the bad results. They never gave up, they always pushed me, and [being around] young guys make me [feel] more young.

“These two races, especially today, is a great moment for the Sky [VR46] team, because Marini, Bez, Vietti are on the podium, but also Franco and Pecco could have been on the podium without the problems.” 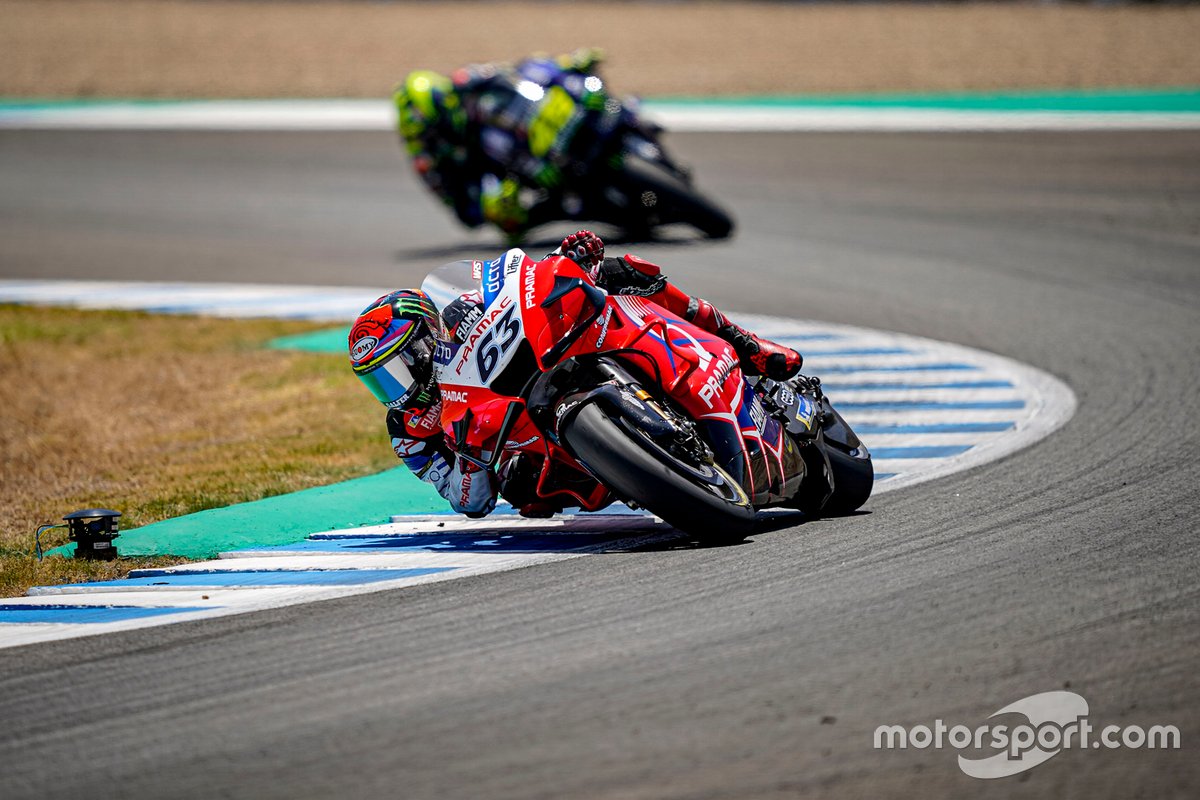