The Prestige Performance/Wayne Taylor Racing duo profited from a well-timed mandatory pit-stop during a full course caution to claim their first series win in Saturday’s opening race, before adding a second from pole in race two.

Mitchell, who won the Silver Cup in the Spa 24 Hours last weekend, set a succession of fastest laps in the second race to build an almost insurmountable margin, leaving teammate Amici with a comfortable run to the finish.

Amici, who started fourth opted to bring the #1 into the pits at the earliest opportunity, which proved to be pivotal as Ruberti’s race ended after he lost his left-rear wheel at the Carousel.

This brought out the caution and extended the pit window period, but meant that new leader Antinucci had to surrender the lead to Mitchell after his own mandatory stop with 11 minutes remaining.

Mitchell led for the rest of the race which ended under another caution after the #34 US RaceTronics Huracan of D Bryce Miller crashed heavily at the Kink on the final lap.

Miller emerged largely unhurt from the incident but was forced to miss race two after sustaining a sprained ankle. His teammate Patrick Liddy was however able to take part in Sunday’s encounter after Ron Attapattu offered his #24 car.

Jacob Eidson and Damon Ockey claimed second overall and the Pro-Am victory in their #09 US RaceTronics Huracan, while the Am class winner Mckay Snow completed the podium

Mitchell led away from the pole in race two and quickly built a healthy lead over Ruberti’s teammate Cedric Sbirrazuoli, while Corey Lewis took the #29 Huracan past Eidson into third place.

A plastic bag stuck in the grill of Lewis’ car appeared to affect the handling of the #29 and Eidson forced his way back into third place under braking for Turn 4.

Mitchell extended his margin at the front to over eight seconds before taking his mandatory pit-stop, one lap after Sbirrazzuoli and Lewis.

Keen to avoid falling victim to their own tactical gains from race one, the #1 rejoined in the net lead of the race as the Pro-Am entry of Eidson remained on track.

Now at the wheel, Amici held onto the lead in the closing laps, despite his 12-second margin being whittled down to just five by a charging Ruberti.

Ruberti was himself being hunted down by Antinucci in the late stages but the pair got caught up in backmarkers, which allowed Ruberti to bring the #27 home a comfortable second behind Amici.

Antinucci finished third to maintain his and Lewis’ championship lead, but Mitchell and Amici are now just five points in arrears heading into the next round in Virginia in four weeks.

Lamborghini Cup class honours were split between the #22 Dream Racing line-up of Justin Price – replacing the injured Ryan Harwick – and the #88 of Thomas Lovelady.

Lovelady fended a spirited comeback from early race leaders Stephanie Cemo and Ashton Harrison, who had to serve a drive-through penalty following the pit-stops as they were under the minimum 99-second time. 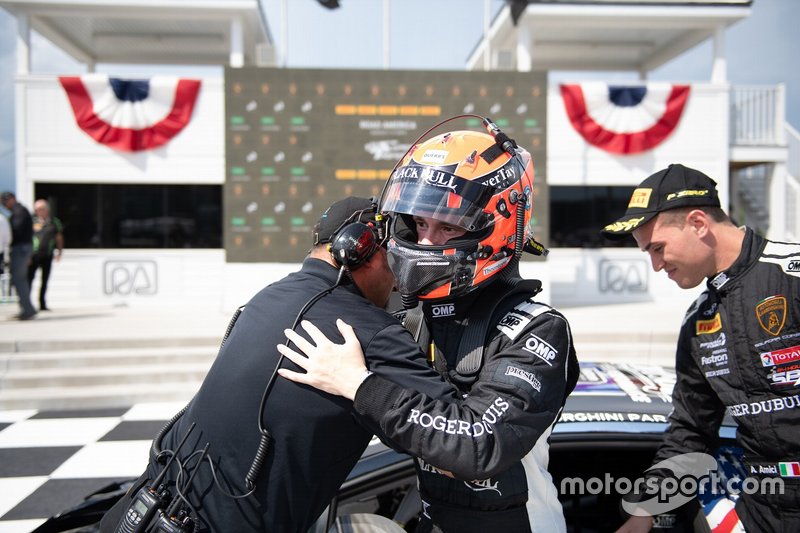