Chris Amon on Ford beating Ferrari at Le Mans in 1966 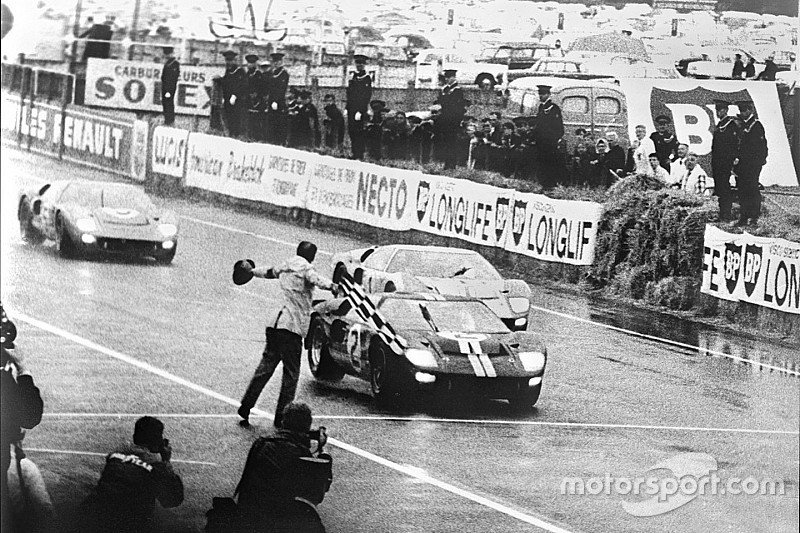 Ford’s 1966 Le Mans winner Chris Amon reminisces about that historic race, when it beat Ferrari, in this exclusive interview conducted shortly before he passed away in 2016.

Chris, going into the race, who were your biggest rivals – Ferrari or the other Ford GT cars?

I was driving with Bruce McLaren in the #2 GT40 and we both knew our main competitors would be the other Fords. We ran at Le Mans in ’65 in the GT40 and we were so much faster than Ferrari until we had reliability issues. We knew Ferrari had improved, but so had we, especially on the reliability front, and that proved to be the case in the race.

Tell us about the start?

Bruce drove the first stints. I recall it was damp and we were running on intermediate Firestone tyres and at 210-220 mph on the Mulsanne Straight, the tyres were shedding tread. I took over from Bruce and he spoke to Firestone and they generously said we could switch to the Goodyears the other GT40s were running. Bruce said to me we had to drive the doors off the thing so we did.

Was that the moment that he shouted ‘Go like hell!’

Yes, and there was a bit of history to that. We had both driven the first two 7-litre cars at Le Mans the previous year: Bruce with Ken Miles and myself with Phil Hill. We were warned to be careful with the gearbox as they were new and unproven and both cars retired with gearbox failures. The McLaren team was commissioned by Ford to build a lightweight version of the GT40 for possible use in 1966. I did the testing of this and drove it in some Can Am type events in the US in late '65. Around that time I was also doing testing at Sebring and Daytona with the standard car and was experiencing a few mechanical issues.

As a result of the above when I went to Daytona for the 24 hours paired with Bruce. I was not fully confident on the reliability front if we were to drive hard the whole race so I suggested to Bruce that we set a fairly conservative pace for the race, and whilst we might be running out of the top three in the early stages, we might be the only one there at the end. We finished fifth.

Our attitude for Le Mans, because of the Daytona result was obviously different. We decided to set a pace for ourselves, which would keep us in touch with the lead and then go for it later in the race. This strategy fell apart when our tyres started losing treads early in the race and we lost considerable time. Bruce and I were both contracted to Firestone so it was a difficult thing for Bruce to negotiate a switch to Goodyear. When I was called in to change tyres I think Bruce's frustration had reached boiling point, he put his head through the car door and said 'Go like hell'.

What happened at the finish?

The idea was that the leading GT40s would cross the line together but in practise it wasn’t possible to have a dead heat. We weren’t sure who had won initially.

What was the toughest part of the race for you?

Back in those days the top speed of the GT40 was 100mph more than some of the other cars on the track so it could be quite hairy especially at night in the rain with mist hanging in the air, bearing down on these cars when you couldn’t see much. I found driving at dawn and dusk especially tricky because the light was so poor. Another thing was the cars back then chucked out quite a lot of oil so as the race went on, and the rain came down, it got very slippery. Our throttle was also sticking a bit which isn’t what you needed going into a corner.

Did you get any sleep?

I didn’t get any. We were stopping every hour and a half for fuel and we weren’t allowed to drive for more than four hours at a time. Bruce could sleep anywhere at any time but I couldn’t. I would take a shower when I got out of the car and change my overalls because you would get drenched in sweat driving the GT40. I also had some interesting conversations with Henry Ford II and his wife Cristina, during the night.

Tell us about the podium celebration at the end?

I have to admit I was only 22 at the time and I was overawed by the situation. Henry was on the podium and I believe his wife was also there. I can’t remember exactly what was said but it was a very joyous occasion.

It’s difficult to say because the speed differential was higher in my day and the cars didn’t provide as much protection. The circuit was also more dangerous. Our cars didn’t have power steering or paddle shift gear boxes so they were physically very demanding to drive. You would get huge blisters on your hand from changing gear. Another thing was you really had to manage the brakes because at the end of the Mulsanne Straight they would be cold and then subjected to tremendous heat as you slowed from 220 mph.

There was a real risk the discs could crack. It was certainly more dangerous in my day but if you wanted to race, that was the deal. I think today’s drivers are subjected to much higher G-forces and they also have to manage different settings in the car so they have more to think about during the race. At the end of the day, endurance racing is the ultimate test for man and machine and that hasn’t changed a bit in the last 50 years.

Was that win the highlight of your racing career?

At the time I was probably more interested in F1 than sports car racing. It’s been said that I was an unlucky F1 driver because I should have won a lot of races but the fact is many of my contemporaries were killed in F1 so I think I’m lucky to still be around. There’s no question that winning Le Mans with Ford was a very special moment in my career.

I would be delighted for Ford. I won with Bruce and he wasn’t with us for much longer after that race so it would be especially poignant for me personally to see history recreated. I wish the team all the best.

New Zealander Chris Amon was born in 1943 and was active in F1 racing in the 1960s and 1970s. Widely regarded as one of the best F1 drivers never to win a Grand Prix, he died in August 2016 shortly after this giving this interview to Ford Chip Ganassi Racing.
This story was first published on Motorsport.com in June 2016.

The real star of the Ford v Ferrari movie