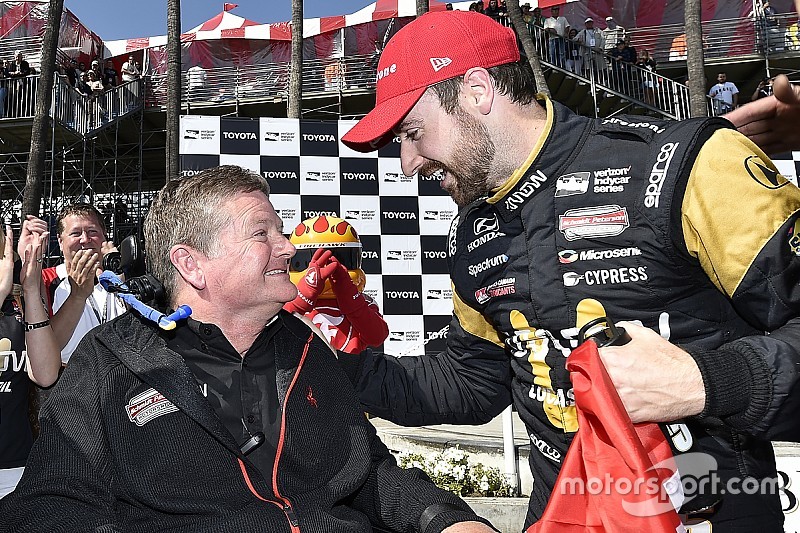 Sam Schmidt says that he hopes James Hinchcliffe will remain with the squad as it evolves into the Chevrolet-powered Arrow McLaren Racing SP, despite his strong ties with Honda Canada.

Hinchcliffe, now in his fifth year with the Arrow Schmidt Peterson Motorsports team, is currently under contract with the team through the end of the 2020 season. He has become the poster boy for Honda in his native Canada and has also appeared on TV commercials for Honda products in the U.S.

However, the 32-year-old veteran – who scored three IndyCar wins with Andretti Autosport when Michael Andretti's squad was Chevrolet-powered – tweeted out the following message, suggesting he will remain with Arrow McLaren Racing SP in 2020.

“It’s an exciting day for all of us with Arrow McLaren SP, and the culmination of a lot of hard work put in by all. My love for motorsports started on those weekends watching F1 races with my dad and McLaren was a huge part of that. To be able to drive for that name is a dream come true.

“Thank you to Arrow, Petro Canada Lubricants and all of our partners that put us in this position.

“It is rather unfortunate what this means for our relationship with Honda. They are another company that has done so much for me and when the time is right a discussion to what that means for my partnership with them and Honda Canada will need to occur but that is secondary right now to this exciting news. I’ve worked with General Motors in the past and look forward to rekindling that relationship in 2020.”

Schmidt told Motorsport.com that retaining Hinchcliffe is also the intention of Arrow McLaren Racing SP-Chevrolet, despite rival Honda teams showing willingness to expand in order to accommodate the driver.

“As far as we’re concerned, we have another year on James’ contract and we intend on fulfilling that,” he said. “Today’s announcement was obviously about McLaren, Chevrolet, Arrow and ourselves, and we wanted to get that out there for the sake of the commercial deals so we can start working on joint deals for next year. Then we figured we’d deal with driver announcements in the coming weeks.

“As I think we’ve talked about before, I’m never eager to start a season with two rookie drivers. For one thing, you want the baseline of someone fast with experience such as James, and I think in this particular case, we need as much continuity as possible for 2020. We’re changing engine manufacturers and there will also be a new dynamic with personnel involved from McLaren who need integrating, so I don’t want to change anything that we don’t have to.

“We don’t have anything to do with James’ deals with American Honda or Honda Canada – that was all done directly so I don’t know what those terms are or what they entail. We as a team have a contract with James through 2020, and what he has in terms of additional obligations beyond that, I don’t know.

“The bottom line is that we love Hinch and our partners love Hinch, and we want to fulfill our obligations there. It’s a shame that if he wants to stay with us that he can’t fulfill his other obligations, but that’s nothing that we can control because the positives of the McLaren deal far outweigh any negatives.”

Asked if Hinchcliffe were to choose to walk away from the contract whether he could do so without financial retribution, Schmidt responded: “We haven’t anticipated that he would want to make a change so we haven’t even discussed any of that. It hasn’t been a point of discussion yet.”

The team’s second driver this year has been ex-Formula 1 driver Marcus Ericsson, who has shown spasmodic promise, particularly on race days, and finished runner-up in the second Detroit race. Schmidt says the 28-year-old Swede remains “in the mix” for that second seat.

“Honestly, we told everyone that we were holding off on any decisions until we got past today’s announcement,” said Schmidt, “and then we would see what our options are. I would say we have more recognition with the McLaren association, because if they so choose, they can offer benefits that we couldn’t do before. So hopefully this deal opens up more otions.

“Marcus is still in the mix and there’s definitely been signs that he could be really, really good next year. Driving through the field at St. Pete and COTA and a few other places, he’s looked rather impressive. For some reason we haven’t had the consistency there that we needed, but he certainly isn’t out of the picture.”

Two favorites for being part of a revised driver line-up at Arrow McLaren Racing SP include IMSA WeatherTech SportsCar Championship Prototype champion Felipe Nasr who tested with the team two weeks ago, and Nicholas Latifi – son of McLaren investor Michael Latifi – who is currently second in the Formula 2 championship, racing for DAMS.